This Week In Sun Sports: We Need To Talk Edition

Share All sharing options for: This Week In Sun Sports: We Need To Talk Edition

Welcome back to This Week in Sun Sports, kids. As always, we'll be looking at the oddities of the Rays broadcasts from this past week. Anything from the announcing, to a crazy video segment, to the fans in the stands. If it's on Sun Sports, we see it. Because--like Jerry Fletcher "protecting" Alice Sutton on the treadmill--we're always watching.

This week covers Monday, April 30th - Sunday, May 6th. If you missed last week's, you can find it here.

The real baseball week ended on a bit of a down note, but here at This Week in Sun Sports, we're always rocking a D7.

Listen, Readers, we need to talk: Monday night I was watching the game at a local watering hole as I am wont to do. Unfortunately, the jukebox was playing so there was no sound. I didn't know what was being said, but I knew something was awry when this appeared on the screen. 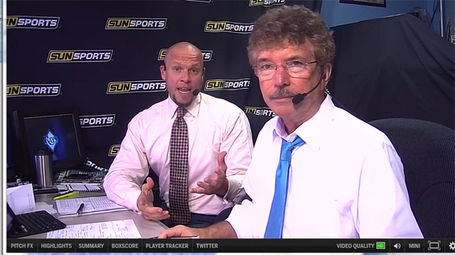 This is the new camera angle in the booth. And it's certainly... intimate. I feel like I'm getting 'The Talk' right now. BA is explaining that "when a man and woman really really love each other..." and Dewayne is giving me a look that says, "If you get a girl pregnant, I'll cut it off myself."

In the top of the fifth, Eric Wedge gave us a Caddyshack flashback. 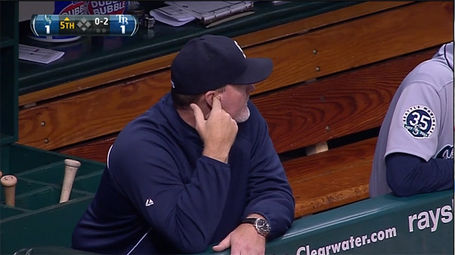 All right, all right! Another twenty says he eats it... 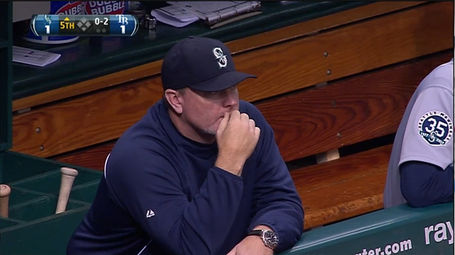 Ooh, I can't tell what sense that's employing. Is he tasting it, or trying to start up that olfactory? Maybe a little bit of both. Either way, you owe me twenty bucks. Please?

Our on-field segment of the week is in theme for May Day, as in "Mayday, that umpire just bailed!"

In the bottom of the first inning, the ump was wildly out of position to make the call on Carlos Pena at first. The replay was close, but the ump clearly just guessed. I love how he makes the call and then just haters-gonna-hate-walks it back to position for the next play while everyone else just stands around confused.

In the top of the sixth inning, after B.J. Upton made a nice running catch at the track in center, he decided to help himself to some sunflower seeds. 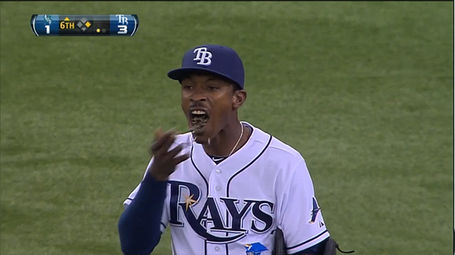 Yeah, he could have eaten them like a human, but he's a stallion. Also, if someone wants to photoshop this you could go a few ways. On pretending the seeds are bees alone. If the bees are flying out of his mouth it's a Mummy Photoshop and if they're flying in, it's The Wicker Man. Commenter RJW123 thought this might make a great gif, so I made one of those, too.

In the top of the eighth inning, the BA file footage reared it's crew-cut'd head: 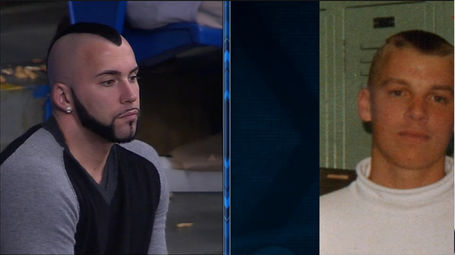 The guy on the left had received a good deal of screen time earlier in the broadcast. Here, the guys in the truck thought it would be nice to compare him to BA. Live-BA shared the screen with him for a second, but then was replaced by this file photo that we saw last week in the text-poll question. For once, BA played it serious:

We got a pretty good game going on here, don't we? Please?

After the top of the fourth, Sun Sports teased Luke Scott's upcoming at bat: 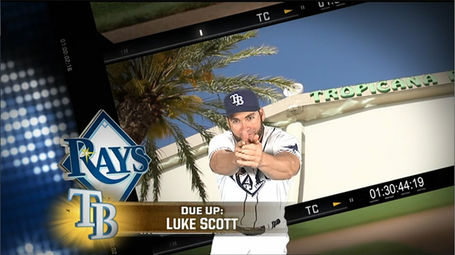 There was also the short, creepy clip in there:

When that came across the screen, I thought he was in my living room.

In the bottom of the fourth--because you always wanted to know--there was a trivia question: 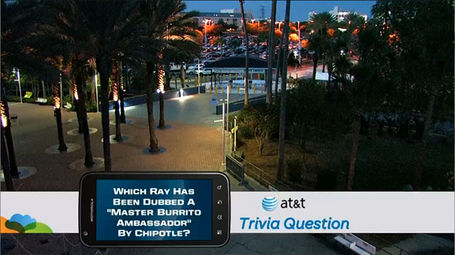 Who does have that 'MBA' from Chipotle? I have the 'Guacamole And Salsa degree (GAS), but never the MBA. The money has got to be on Longo. I'd make the Jose Molina joke, but it seems a bit obvious here, and Dioner Navarro soured me on the catcher/fast food jokes anyhow. 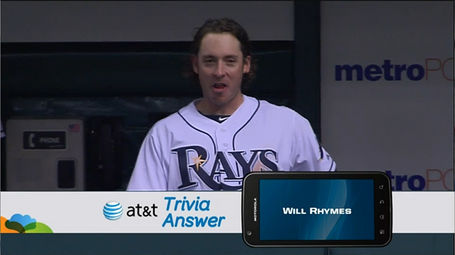 Will Rhymes, really? Can Sam Fuld-ito even eat an entire burrito? Dude's like a buck forty. Whatever, I'm done with this line, it's just making me feel fat.

Later in the inning, Blake Beavan was a bit upset with himself after a passed ball got away from Jesus Montero. I was just going to screen cap this, but I gif'd it so you'd get a feel for his pain:

I said he was in pain, but when you take BA's comments about the passed ball into consideration, I'm not so sure:

BA: That was a fastball there by Beavan that was yanked and it squirted right off the glove of Montero like he's got too much lubricant on it... Too much in between innings. Too much lube. Squirt.

DS: He really handcuffed himself.

BA: It's not pretty.

I know I said that new camera angle in the booth made it look like we were getting 'The Talk,' but this is ridiculous. Look at Beavan's face now and tell me what you think.

I don't remember what inning this was in, but these guys showed up in several broadcasts this week. 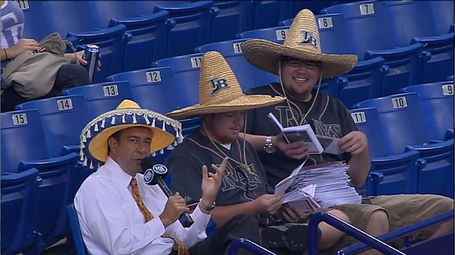 Chris and Bart were busy filling out 7000 All-Star Ballots. Let's go Sean Rodriguez! Todd Kalas went with a slightly different style for his Sombrero. On the scale of Sombrero to Lamp Shade, Kalas is clearly in the lighting department.

I generally don't do more than one on-field play a week, but since I didn't do one last week, and I make up all these 'rules' as I go along, here's another:

In case you somehow missed this: that's Michael Saunders in the bottom of the sixth helping a Luke Scott fly ball over the wall for a homer that would be the deciding run in the game. Thanks, Mike!

I'm also not sure of the inning on this next clip. I know it was on Sportcenter's "Not Top 10" last week, so you've probably seen it. Anyhoo, reader James Kannengieser sent in a link to a gif of the guy reaching for a foul ball and falling over the railing. He stuck the landing, but spilled the beer. I award no points. Here it is.

After closing out the game, Joel Peralta did his best 'Archer' impression: 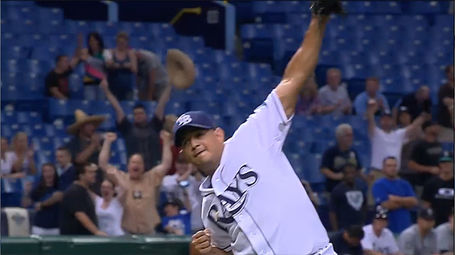 After Peralta's save, Joe Maddon gave him the day off. Peralta took that literally: 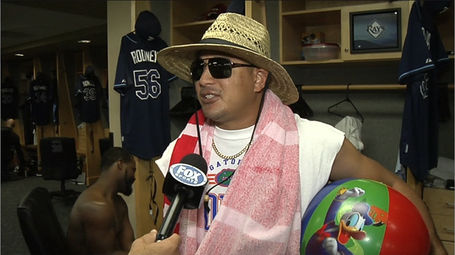 Rodney's seen in the background laughing a bit. He'd take the reins back and close out this game. After the game, Elliot Johnson wanted to get in on the Archer: 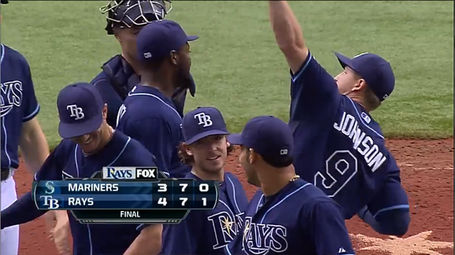 Hey, as long as the Rays are winning games, I don't care who plucks that bowstring.

In the top of the third, David Price was interviewed, and that meant James Shields had to get involved.

Two things I think are important in this clip: First, Fernando Rodney's hand gesture is GIFable on it's own. He's certainly excited for the next pitch. I like that he's so amped up early in the ballgame. Secondly, Notice how James Shields' arm slot lowers as he dumps the seeds on Price's head. He could be getting tired. I think Jim hickey needs to take a look at this to address any potential injury issues that may arise. The velo on those seeds are definitely decreasing.

In the top of the fourth, foul-ball-boy Scott Kersey made a bullpen-catcher-saving-catch. 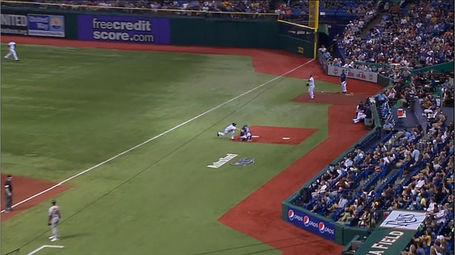 It was a pretty nice play all-in-all and he got a rousing cheer from the crowd. The issue I have, is why do these foul ball people have to wear helmets? Most of the time they stand right by the stands, not 10 feet away from the crowd. The guy in the first row is chowing down on some nachos and not paying a lick of attention to the game at hand. The foul ball boy has a glove and is focused on every pitch. And who has to wear a helmet for safety? Even the bullpen guys don't have to wear helmets, and you know how much tomfoolery goes on over there. But, no, the one guy who's job it is to defend other people has to look like a short-bus reject and everyone else gets to be blissfully ignorant.

In the top of the sixth, BA gave his pitch for foxsportsflorida.com.

DS: You know the first?

In the bottom of the 10th, Jonny Gomes made a crazy good catch on a Carlos Pena blast. Joe Maddon gave us some good, everyman, lip-reading moments:

I don't know what "Goalie mitt" and "So Shucking Un-Cleaveable" mean, but that's why he's Joe Maddon.

We finish up this week in the top of the first: 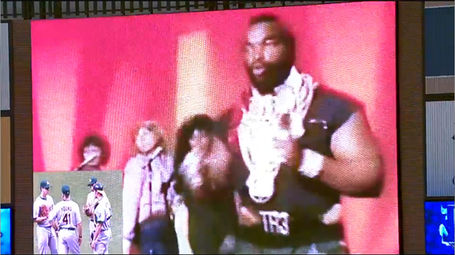 That's Mr. T playing on the big screen while the A's have a meeting on the mound. Listen, BA, we need to talk. You need to get your act together, sir.

BA: I'm having a hard time locking it in here with Mr. T up on the scoreboard. What did he sing? ...Well, that's just awful... Oh my goodness.

DS: That's part of the ballpark experience here. Sunday baseball at the Trop.

I pity the fool who can't keep it together when Mr. T is on the jumbotron.