The talk all season with the Rays has been with the aggressive shifting Joe Maddon and the team has done in 2012. Jason Hanselman had an excellent piece on it last year but this season, it has been all about the shift at the national level. It started on opening night when the team employed this aggressive overshift against Alex Rodriguez. Early on, Rob Neyer wondered aloud if the Rays' strategies were redefining infield defense:

It's true that the Rays' and Brewers' successes -- collectively, Milwaukee's four primary infielders improved by 56 Runs Saved from 2010 to '11, going from terrible to below-average -- doesn't prove anything about defensive shifts. But it's pretty compelling evidence, of a sort. And to get back to the question posed near the top of this page ... Yes, I do expect other teams to follow this trend, and I expect it to happen soon. I suspect that a great number of front-office types are convinced already, but haven't had much luck convincing their managers.

Just last week, pitching coach Jim Hickey gave an interview (start at 27m mark) to Mark Simon of ESPN.com in which he stated the Rays indeed planned to be more aggressive with the shifting in 2012 and they met with the pitchers in camp to lay out that plan. Yesterday, the New York Times ran a piece that called Joe Maddon the King of Shifts noting that the team has employed 153 shifts this season by Baseball Info Solutions count. That total is nearly twice as much as the next team on the list. The question remains, is it working?

The aforementioned piece claims the Rays saved themselves 85 runs last season, which gave them eight to nine wins (10 runs is a win) and that the team has already saved themselves 28 runs this season. That claim was quickly debunked by The Book blog as Mitchel Lichtman showed the math behind figuring out how many runs were saved last season by Milwaukee when they employed 170 shifts. Let's just say the number was significantly less than 56. That lines up with the low ranking Baseball Prospectus gives the Tampa Bay defense so far this season using their proprietary defensive metric.

Park-Adjusted Defensive Efficiency (PADE) measures the percentage of balls in play that a team's defense converts into outs, with a park adjustment factor. The Rays have finished first or second the past two seasons but are currently ranked 19th heading into play yesterday.

The chart below shows the batting average for each batted ball type. On the left side are the league totals from 2006 to 2012 while the right side shows Tampa Bay's totals.

Hide the women and children when you go back and revisit the 2007 season and how awful the defense was and then bring them back into the room when you look at the 2008 data. From 2009 to 2011, the Rays were better than league average in each of the batted ball types with some areas, such as line drives in 2010, being converted into outs well above the league average.

2012 has been a mixed bag of success as the Rays are not gaining much of an advantage on groundballs as the team is converting them into outs slightly below league average but is doing very well to date with line drives. The one area the team has uncharacteristically struggled to date is turning flyballs into outs as the batting average on those batted ball types has seen a 58 point spike from last season and is 35 points above the league average.

The two differences between last season's outfield and this season's outfield defensive is the absence of Sam Fuld and the period of time Upton missed to start the season. Last season, Fuld made 76 appearances in the outfield with his superior defensive skills while this season, Desmond Jennings, Matt Joyce, B.J. Upton, and Ben Zobrist have made all but three of the starts in the outfield. Joyce and Jennings have split equal time in left field while Jennings has one more game played in center than Upton. We know the players are studying where to line up in the outfield but their success rate in turn flyballs into outs is not on par with previous seasons. Hard hit flyballs are certainly part of that as Rays' opponents are slugging .897 on flyballs while the league average is .831. Additionally, the league on base percentage on flyballs is .222 but Rays opponents are reaching base at a .255 clip.

If we focus on just the batting average on balls in play, the situation is not terribly different.. Most notable is the 54 point spike in BABIP on fly balls so far this season.

The difference in BABIP works out to roughly ten extra hits over the course of the season to date. Just this past week, both Elliot Johnson and Brandon Allen misplayed flyballs into base hits and another one by Stephen Vogt earlier in the season comes to mind but those three players and Chris Gimenez have only accounted for 36 innings of play in left field, or just four percent of the total innings logged by Rays outfielders this season. Is the difference between Sam Fuld and that quartet in the outfield worth 10 hits? Possibly. 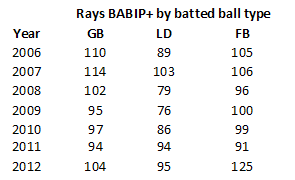 I would also be remiss if I mentioned Hanselman and didn't bring wOBAcon into play as he leads the crusade to make the metric more commonplace. Here is how the Rays break down against the number of bases per ball put in play: 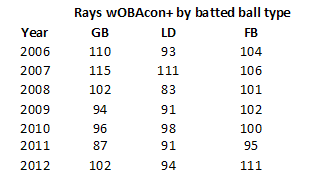 Notice how each wOBAcon measure is lower than its BABIP+ counterpart. This means that while the Rays are allowing more hits in play, they are better at preventing the extra base hit. Again, there have been several plays this season, such as this one by Joyce, where the outfielders have made excellent reads off the wall or have executed strong throws that have held runners at first base when the ball looked like a double off the bat. That, and Albert Pujols thinking a single looks like a double certainly helps too.

The shift helps, but the strategy cannot hide all soft spots on the team defense. The team defense in the outfield has certainly been affected by Upton's late start to the season and Fuld's absence all season while having to play non-standard outfield types to fill in the gaps. Perhaps Brandon Guyer's promotion is a permanent one and that can help address this issue but it is worth revisiting this at the mid-point of the season to see how this early season trend changes.