The Rays finished last week by taking 2 out of 3 from the Baltimore Orioles to move back into first place in the AL East. The series victory over the Orioles removed some of the bitter taste caused by getting swept at home by the Chicago White Sox. The bitter taste returned after Andy Pettitte and Ivan Nova shut the Rays offense down in taking the first two games of the series against the Yankees.

The Rays rebounded nicely to take the final game versus the Yankees and sweeping the Miami Marlins to finish the week with a 4-2 record, remain on top of the AL East with a record of 35-25, and have the best record in the American League.

The Rays will have an off day today as will much of MLB. Feel free to discuss all things Rays in this thread.

The Rays will enjoy a home day off before welcoming the Mets and Marlins to Tropicana Field for a pair of three game series. The pitching matchups vs the Mets will be Chris Young vs Alex Cobb, R.A. Dickey vs David Price, and Johan Santana vs Jeremy Hellickson. The Rays and Marlins will feature Carlos Zambrano vs Matt Moore, Anibal Sanchez vs James Shields, Mark Buehrle Josh Johnson vs Alex Cobb.

The Orioles will host the Pittsburgh Pirates for 3 games before traveling to Atlanta to take on the Braves over the weekend.

The Yankees will be on the road for all 6 games this week with 3 games in Atlanta against the Braves and a visit to Washington to take on the Nationals.

The Blue Jays will host the Washington Nationals in a 3-game series and the Philadelphia Phillies for 3 over the weekend.

The Red Sox will be on the road for all 6 games this week with 3 games in Miami against the Marlins and a visit to Chicago to take on the Cubs over the weekend.

Evan Longoria cleared a key hurdle in his comeback from a partially torn hamstring by running the bases in Miami on Saturday evening and reported that he felt great on Sunday. The Rays don't want to rush his rehabilitation and will have him run the bases again at Tropicana Field on Tuesday which means he couldn't start his rehab assignment until Wednesday at the earliest.

"It's a struggle between me and them sometimes," Longoria said. "I understand that their job is to be cautious and get me back to stay back for the whole year, and that's definitely my goal, too. We've been going back and forth as far as when I'm going to come back and play." - tampabaytimes.com

"We're interested in playing the last game of the season this year and winning it, wherever that may be, and we're not going to do it without him," Maddon said. "So it's really important that we be patient right now, and make sure we follow the procedures and practices that permits him to be there when we need him the most."- tampabaytimes.com

Kyle Farnsworth will begin a rehab assignment in Port Charlotte on Monday and Joe Maddon has said that the Rays will be cautious with him which may suggest that the Rays plan on utilizing a large portion of the allotted 30-days of rehab time.

Jeff Keppinger was placed on the disabled list on May 21st (retroactive to May 18th) and was expected to miss 3-4 weeks. All we have heard from Joe Maddon in reference to Keppinger is that he is looking forward to getting Longoria, Fuld, and Keppinger back. We'll keep an eye out for any other updates on Keppinger and pass it along accordingly.

The Rays wives defeated the Marlins wives 14-2 in a charity softball game which raised $3,000 for Autism Speaks. 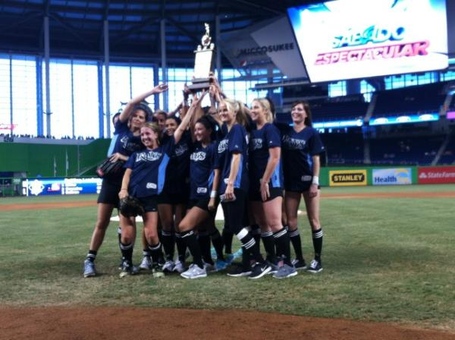 On Wednesday, June 13th the Rays will hold their Rays Broadcast Auction - packages include hitting lessons with Carlos Pena, pitching lessons with David Price, a chance to become a Rays executive for a day, a trip for two to the All-Star game in Kansas City, and a suite party at Tropicana Field during a Rays game. Auction items and bidding information can be found by visiting raysbaseball.com/broadcastauction. The auction will run from 7:10 p.m. until 10:15 p.m.

The annual "Rays on the Runway" event benefiting the Children’s Dream Fund will take place at the St. Petersburg Marriott (12600 Roosevelt Blvd.) on Thursday, June 14...doors will open at 6:30 p.m. ...tickets are still available that can be purchased via childrensdreamfund.org.

What Does Sternfan1 Have To Say:

This was a very nice week for our Rays, even though as last week it started badly with two straight losses to the Yankees which saw them take over first place and drop the Rays into third briefly. Then came David Price and his epic standoff with Alex Rodriguez, with the score 5-1 one out and the bases loaded. After an eleven pitch battle Price struck out the legendary power hitter and got Robinson Cano to end the inning and virtually the game.

The Rays then went into Miami and swept their in state rivals in their new ballpark snapping their offensive woes and putting up twenty two runs without the DH. Go figure. With the sweep of the Marlins we find our Rays back atop the ALE and coming home to face those pesky Mets. It was great to see fan favorite Ben Zobrist burst out of a season long slump and smack the ball all over South Beach.

Now if we can get Carlos Pena and Luke Scott to start hitting and the return of Evan Longoria apparently around the corner, things certainly will look brighter.

Andy Pettitte handcuffed the Rays hitters striking out 10 and walking 2 in 7.1 innings of work. The only shred of good news for the Rays was Desmond Jennings being activated from the disabled list.

James Shields frustrated after the loss:

"It's definitely frustrating that we're not playing up to our potential," Rays starter James Shields said after taking his fourth loss of the season. "We definitely have to minimize the mistakes in all aspects of our game, not only defense. We've got to do better on offense and do better on pitching. Today was not a very good game." - mlb.com

Ivan Nova followed Andy Pettitte's strong performance with 8 innings of 1 run ball. Alex Cobb was impressive giving up 2 runs in 7 innings but was tagged for two runs without retiring a hitter in the 8th inning.

B.J. Upton on lack of hitting:

"[Not hitting] happens," B.J. Upton said. "I don't think anyone in here is pressing. We know it's a long year. We just have to go out there and grind it out every day. You know, we're pretty good at bouncing back. That's what we have to do right now. We're not swinging the bats the way we want to, but we'll find a way. Hopefully, we can turn it around sooner than later." - mlb.com

The Rays offense finally arrived at Yankee Stadium and plated 5 runs (3 earned) in 7 innings and David Price lasted through 5 innings but struck out Alex Rodriguez with the bases loaded in the bottom of the fifth and got Robinson Cano to ground out to end the inning in what felt like a post-season matchup with each hitter.

David Price on his battle with A-Rod:

"We got ahead, 1-2, and he was fouling off some pretty good curveballs," said Price about Rodriguez's at-bat. "And I called [catcher] Lobaton out there and told him I want to stick with it. Keep throwing that to him. That's the best my curveball's been all year and I wanted to stick with it. I was able to throw a good one, and he swung over the top of it."- mlb.com

The Rays offense delivered 5 runs on 10 hits but the story of the game was the inability of the Miami Marlins to capitalize on a career high 8 walks in 4.1 innings by Jeremy Hellickson.

Ozzie Guillen on his teams inability to get to Hellickson:

"The kid who started the game for them, he can't even finish [the fifth inning]," Guillen said. "He was walking people. We have people all over the bases. We couldn't take advantage. If we want to compete, we've got to do better in that department." - mlb.com

Joe Maddon with a brighter evaluation of Hellickson's outing:

Matt Moore on his performance:

"I feel like I did a good job whenever runners were on, I was doing a decent job of being able to slow myself down," Moore said. "That way I could stay within whatever thought process I wanted for that next pitch." - mlb.com

Matt Joyce and Elliot Johnson homered, James Shields pitched into the 7th inning allowing only 1 run, and the bullpen worked the final 2.2 innings of 1 run ball to lead the Rays to a series sweep with a 4-2 victory.

Matt Joyce on the offense:

"It's a little bit of a roller coaster," Matt Joyce said. "That's the way hitting goes, that's the way baseball goes. There's ups and downs. And it was just a case of we had to keep swinging it. The offense is going to come around. And obviously yesterday was a huge game for us and we kind of carried it into today. And hopefully we keep it going." - mlb.com

"They did everything better than we did all weekend," Guillen said. "They played good, they executed, they pitched well, they got big hits -- huge hits -- and we didn't." - mlb.com