This Week in Sun Sports: 'Crawl, Walk, and then Run' Edition

Share All sharing options for: This Week in Sun Sports: 'Crawl, Walk, and then Run' Edition

Welcome back to This Week in Sun Sports, kids. As always, we'll be looking at the oddities of the Rays broadcasts from this past week. Anything from the announcing, to a crazy video segment, to the fans in the stands. If it's on Sun Sports, we see it. Because-- like ducks on the Anatidaephobic--we're always watching.

This week covers Wednesday, June 6th - Sunday, June 11th. If you missed last week's, you can find it here.

It's a brand new day here at This Week in Sun Sports. The clouds are parting, the birds are chirping, and there's a bright golden haze on the meadow. And, look, a rainbow! (h/t Kasey Fairchild) 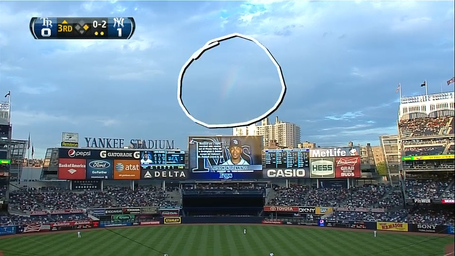 Just in case you didn't know what a Rainbow looked like, BA was kind enough to circle it for you in the third inning. Perhaps this beaming display of nature's glory betwixt the ominous grey clouds was a sign that the Rays were going to turn things around. The Rays didn't win this game, but we did get to see a young Yankee fan on the verge of tears in the bottom of the fifth: 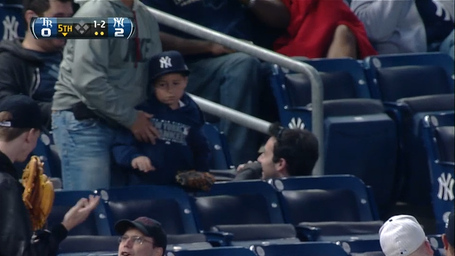 Why is he sad? Did he search for the end of the rainbow and find a metrosexual leprechaun hiding beneath the seats? Is there something more ominous? More sinister? More left-handed? Find out after the jump...

That kid had his eyes squarely on that ball, until his vision was obscured by the skinny-jeans-covered ass of Hipster McDivesALot. When he got back to his seat, the Gentleman Diver was chastised by his hipster friends for "giving a crap" to which he replied that he was merely "mocking the other baseball fans" and that he'd "never actually care about any sport except football." And, by his condescending tone and the lilt in his voice, it was generally agreed that by "football," he meant "soccer."

He certainly didn't care about diving over all those blue seats. Rays fans don't get no respect. #BlueSeatLife.

The stalwart Clay Davis once told Stringer Bell, "Crawl, walk, and then run." Well, unlike Mr. Bell, we here at This Week in Sun Sports decided to heed Mr. Davis' advice in order to avoid being shuffled off this mortal coil. Or maybe just to avoid saying something like this (h/t PreachITBrotha):

Before the game, Dewayne Staats was going over the Rays offensive ills of late. Like the defensive miscues, it was a virus, a sickness ravaging the Rays equilibrium. If only Joe Maddon could make it all better:

DS: If he could write a prescription it would be runs.

We know the Rays were playing some crappy ball, but come on, Dewayne! Makes me think of:

"When you're sliding into first, and you feel something burst..."

Which begs the question: Why are you sliding into first? I doubt you're avoiding a tag. You know it's slower than just running through the bag, right? Maybe if you didn't slide, you could keep your backside clenched and avoid this first base debacle. And after the accident you continue sliding around the bases. How you make it to home is beyond me. Probably because no one wants to get close to you're stank-ass.

While we're on the subject of being sick to your stomach, this is what the duo looked like during that bit (h/t Sveet): 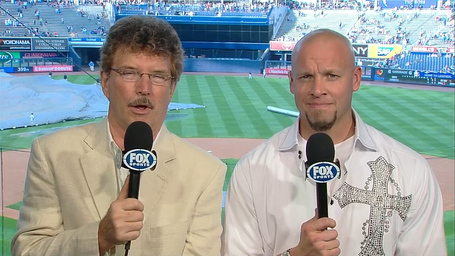 I don't want to harp on it, but if I had to caption this picture, I think it would be, on the left: "Runs." And on the right: "Yep. Runs"

'Tis a shame that the guys were wearing all white for the road trip to Miami. Hopefully for BA, the power of that giant cross will help him get through the game. Say, brah, do you think he owns that shirt or bought it for the trip?

In the top of the second, someone finally takes Clay Davis' advice to heart (h/t Collette for the gif):

That's Austin Kearns, on his hands-and-knees scrambling after a Desmond Jennings grounder. Of course, with Jennings' speed, Kearns' crawl allowed him to practically walk into first. OK, crawl, walk. Now we're on a roll. Now we just need to run...

In the bottom of the seventh, there was a bit of an issue with the dugout-to-bullpen phone and Will Rhymes had to run and play a little telephone with the 'pen.

Well, we did it. Crawl, walk, and then run. We've successfully avoided Russel Bell's fate. No chance of anyone getting killed or injured now-- Oh no...

In the top of the ninth,Sean Rodriguez struck the ball well, but ended up lining out to Logan Morrison in left. Puffy was none too pleased as he rounded first (h/t pudieron89):

Thankfully, he didn't take it in the face, but he was thisclose. Just goes to show you, that even if you do, everything right, you can still get got.