Secondary Pitches and the Rays Starters

Share All sharing options for: Secondary Pitches and the Rays Starters

Bill Petti of Fangraphs had a very interesting post yesterday on how secondary pitch usage impacts attrition. A simpler title could have been, "The Scott Kazmir Effect." That post followed one done the previous week by Petti which looked at velocity decline and pitcher attrition by age. The first article sparked an inquiry by Eno Sarris wondering about pitcher who rely on change-ups as their primary secondary pitch gained an advantage on attrition over pitchers who use curveballs, sliders, or even split-fingered fastballs as their secondary pitchers.

Jeff Zimmerman has done work showing how extreme uses of breaking balls increases pitchers' chances of hitting the disabled list but Petti went and looked at all pitches and broke it down between starters and relievers to see where the impact was. Overall, his findings were that there is no distinguishable difference between which secondary pitch a pitcher uses but there is a difference in the frequency in which that pitch is used. 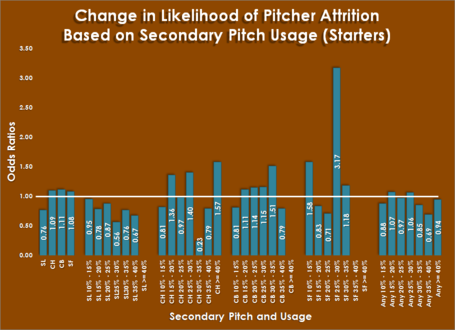 Against that data, here is how the Rays' starting pitchers stand in terms of pitch frequency by year and by type: 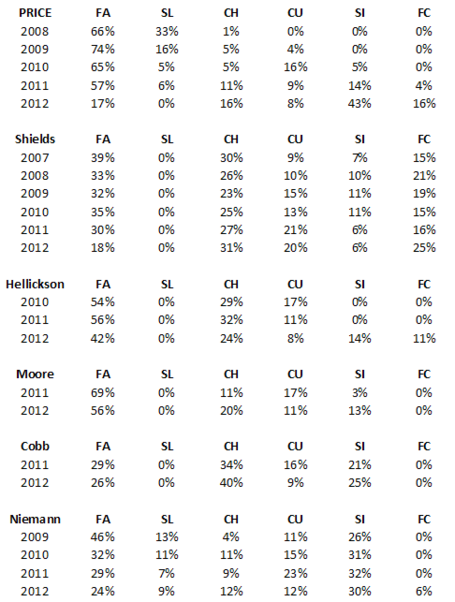 It is interesting how the slider is currently non-existent on the pitching staff with Niemann on the shelf and just how many off-speed pitches are thrown by the staff these days. According to Petti's numbers, 39 percent of starters use the slider as their secondary pitch, 29 percent use a curveball or a change-up while just 3 percent use a splitter.