Rays Depending On A Carlos Pena Rebound

Share All sharing options for: Rays Depending On A Carlos Pena Rebound

Returning Desmond Jennings, Jeff Keppinger, and Evan Longoria to the Rays lineup will be a big bonus but to become the type of offense that can consistently put pressure on the opposition and transfer pressure into runs they are going to need to more production from Ben Zobrist and Carlos Pena.

Last Friday I looked at the good and the bad of Ben Zobrist over the past 3+ seasons and asked the question Who Is The Real Ben Zobrist? Almost on queue Zobrist led the Rays to a 3-game sweep of the Marlind with a monster weekend hitting .636 (7 for 11) with 2 homers, scored 5 runs, and drew 3 walks without striking out.

This week, I'd like to look at Carlos Pena who has been in a seemingly season long slump. His April includes a majestic homecoming grand slam off Yankees ace C.C. Sabathia and the game winning hit off Mariano Rivera on opening day and a slash line of .286/.412/.488. Since May 1st a span which encompasses 162 plate appearances he has hit .131/.296/.254 and has struck out in 30.8% (50K/162PA) of his plate appearances.

Strike outs need to be balanced by extra base hits and Pena has failed to generate extra base hits while maintaining his usual frustrating high strike out rate. Is fair to wonder if he is in a slump and if he has the ability to raise his 2012 numbers to what levels similar to his last 500 PAs. Is the 34 year old Pena capable of a rebound?

As I was beginning to organize my thoughts a tweet came across my timeline from Jonathon Gantt with the Rays Communication Department that gave me some hope:

After seeing Gantt's tweet I checked Pena's career first half and second half splits. The good news is that Pena (in his career) has been a better second half hitter (.246/.365/.516 an OPS of .881) then in the first half (.228/.339/.448 an OPS of .787). My positiveness was tempered a bit when examining his OPS splits over the last three seasons and noting that they are somewhat neutral. In 2009 (.891/.897) and 2010 (.737/.724) there was little difference between his first half and second half OPS. In 2011 he was able to see a more noticeable increase in OPS from .801 in the first half to .844 in the second half.
Looking back at his 2011 season after 62 games Pena was hitting .217/.355/386 with 9 HR while striking out 25.3% (58K/229PAs) and through 62 games this year he is hitting a similar .191/.341/.346 with 8 HR while striking out 29.1% (77K/264PA). Pena's 2011 numbers are weighted down by a very poor April his 2012 numbers are weighted down by a very poor May. It is my belief that Carlos Pena has a lot of good baseball left in him in 2012 and his resurgence along with the return of Evan Longoria will lead to a much more consistent run scoring offense and another appearance in the post season.
But, I am an optimist and as such hedge on the positive outcomes and put a positive spin on situations that others see as bleak. Despite my optimism there are some fans that are concerned that Pena's skills have declined to a point that he will be unable to find that second wind, that he will be a big disappointment, and that signing him was a waste of money - so for those who like to not trends and not necessarily the 500 PA metric established above I present the month by month data below. It should be noted that the data for June 2012 is included in the data sets since the data presented for the 500 PA was from July 20, 2011 through June 12, 2012. 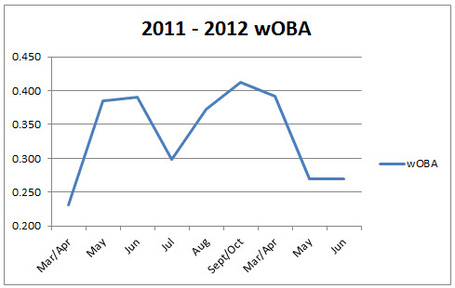 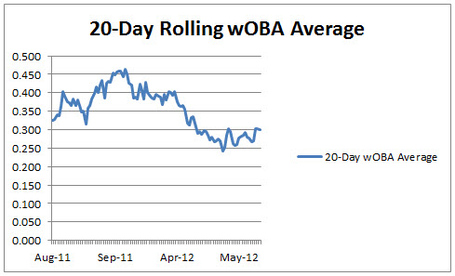 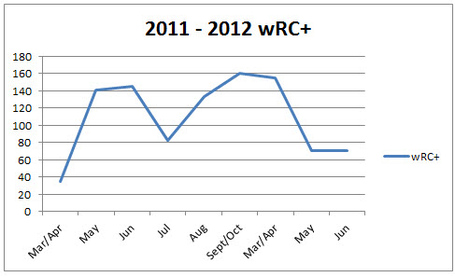 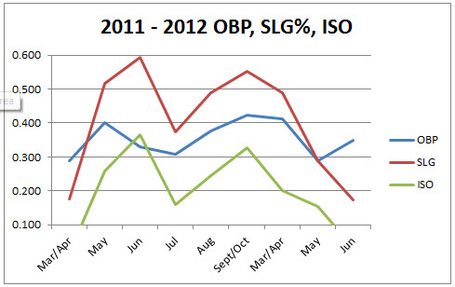 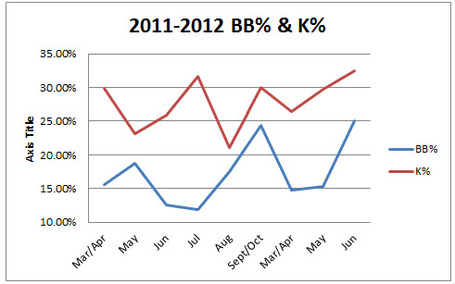