As fans, it is our natural inclination to become frustrated when our favorite team struggles. More often than not, we feel the need to pin the blame for the team's shortcomings on players who are struggling to perform. Because of the Rays' mediocre record since Longoria suffered his injury, many players have been criticized and became the target for the team's poor or lackluster performance. One of those players is Jose Molina, the Rays co-starter catcher. Between his pedestrian bat and apparent lack of skill in blocking errant pitches in the dirt, Molina is an easy target. However, I concur that Jose Molina, while not performing well, is not the player to be blamed. Understanding who he is and what value he does bring to the Rays' organization will help us better appreciate him.

As a catcher, Jose Molina's worth lies in two main categories: hitting and defense. Hitting is an easier aspect to quantify. Defensive stats for catchers are limited.

It is vital to view Molina's offensive output in context. Catchers, as a whole, rarely provide much offensive firepower. Occasionally, a player like Brian McCann or Buster Posey displays aptitude with the bat, but normally the catcher is a weak hitter.

What does all this tell us? Catchers who can hit are rare. It is fair to say that the offensive expectations for a catcher are low. Jose Molina's line is not so dismal in comparison to the competition. (Remember, this doesn't make a good bat at the catcher position better than a good bat at 1B. A good hitter equals a good hitter. The market's lack of hitters makes a catcher who can hit more valuable because the market sets the value.)

Another factor to remember is that Jose Molina is not, and never was, a competent hitter. When the Rays signed Jose Molina during the past offseason, they signed him for his defense, not his hitting. They understood that his contribution to the team would most likely come from his glove and intangibles rather than his bat. 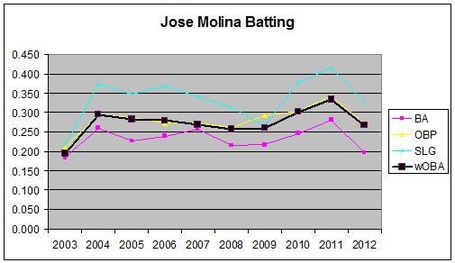 This is what should have been expected from Jose Molina. Expecting him to perform at last year's level is ludicrous. His offensive output this year should not be disappointing or even surprising; he has managed to perform at his career averages. This doesn't imply that Molina is hitting well. He certainly is not. But for the Rays, having a player meet their offensive expectations is certainly not a bad thing. The team's low offensive output should instead be shifted towards players not living up to expectations.

The two most visually obvious defensive strengths attributed to a catcher are (1) throwing out runners and (2) blocking pitches. As mentioned earlier, Molina has a reputation as a strong defender. But so far this season, he has been ridiculed by fans for his defense. This can be due to a misunderstanding about Molina's defensive strengths and the lack of attention a certain aspect of catching receives.

For his career, Molina has thrown out 39% of runners, which is a very good rate. So far this season though, Molina has only thrown out 16% of base stealers, a sub-par rate. His career numbers are probably more reflective of his talent at throwing out runners. However, his performance this year has been lacking in this category. This is the one aspect of Molina's game that has been lacking, but one would also expect to improve.

One would assume that a player with such a strong defensive reputation as Molina would excel at blocking pitches. However, the numbers show otherwise. As Max Maarchi noted in a Baseball Prospectus article before the season, Molina is substandard at blocking pitches in the dirt. Instead, he excels at framing pitches and throwing out runners.

Analyst Bojan Koprivica did a terrific study on the subject last fall at The Hardball Times. Using different but equally sound methods, he also came to the conclusion that the second of the Molina brothers is among the least competent catchers at blocking pitches: his four-year rating is even more severe at -8.8 runs.

Finally, Matt Klaassen periodically publishes catcher defense ratings at Beyond the Boxscore. Although by the author’s own admission the ratings are not particularly sophisticated (failing to apply the adjustments mentioned above), they yield results mostly in line with the more complicated methods. Scrolling down Matt’s list, Jose Molina is rated at -2.7 runs for his blocking duties.

In other words, Molina has never been proficient at blocking pitches (by advanced metrics and the eye test). And therefore, any expectations for him to excel at this were unfounded. The good news is that framing pitches, according to recent studies, is the most valuable aspect of catching, and Jose Molina is quite the pitch-framer.

With recent studies (such as this, this, and this) identifying a catcher's ability to frame pitches, Jose Molina's worth has become more publicly apparent. While many fans have complained, "His fielding sucks!" or "The amount of passed balls he has allowed negate any positives from framing!", that simply isn't the case. Max Maarchi, in the same article, offered this valued insight:

Summing up what we have seen so far, Jose Molina can cost his team a couple of runs (relative to the average catcher) because he is not very adept at preventing wild pitches and passed balls. He more than makes up for that with his ability to prevent baserunners from taking the next base on a pitch. We may conservatively consider him average on fielding batted balls, though he’s probably slightly better than that.

But when we throw framing into the mix, his defense suddenly becomes extremely valuable. Despite playing part-time, he has consistently been able to bring between one-and-a-half and two wins per season to the table.

For those not familiar with sabermetric terms, "runs" and "wins" are used to quantify value. Ten "runs" equals one "win." So the few runs he gives up on passed balls come nowhere near negating his pitch framing, which is arguably 5-10 times more valuable. Stealing many strikes (and in turn, outs) is more beneficial than allowing the occasional base-runner to advance 90 feet.

In conclusion, this article should dispel some of the blame Molina is taking about his performance this year.

Since hitting, blocking pitches, and throwing out runners are three aspects that the average fan can easily evaluate, and since these are the ones that Molina has struggled with, he has become a scapegoat. However, as the numbers reveal, Molina is playing on par with expectations.

In the end, the failure lies in not understanding what Molina's defensive strengths were, and then expecting him to perform in areas that he never did perform well in. Molina should have been viewed (by fans) as a guy who could catch 80 games, bat around .210/.280/.330, and provide defensive value by stealing strikes (framing pitches).

Jose Molina is not a very good player and is certainly not a "pretty" player, but he is a player with some value who should not be receiving a disproportional share of the blame. Jose Molina is misunderstood and under-valued player, two traits typical of a "Rays' player."