Share All sharing options for: This Week in Sun Sports: Laser Show Edition

Welcome back to This Week in Sun Sports, kids. As always, we'll be looking at the oddities of the Rays broadcasts from this past week. Anything from the announcing, to a crazy video segment, to the fans in the stands. If it's on Sun Sports, we see it. Because-- like Old Man Jenkins behind the picture in Scooby Doo --we're always watching.

This week covers Tuesday, June 12th - Sunday, June 17th. If you missed last week's, you can find it here.

In deference to the GFFP, we're going to start on Friday, June 15th. There were quite a few dynamic images to start this week, and I always like to ease in with the more static variety. I promise we'll backtrack after the jump to the start of the week.

As we all know, Todd Kalas is a man about town. He's popular with the men, the ladies, and kids of all ages. In the top of the sixth, he was spotted high-fivin' some kids in the stands: 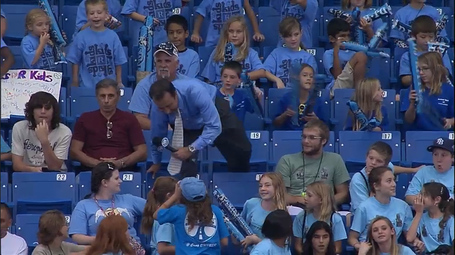 The fans were practically begging for TK to slap some skin, so he obliged and stepped over some seats to make a few dreams come true. This whole ordeal was caught by Dewayne and BA and, of course, they were not silent on the matter:

BA: Not sure they encourage you to go over seats like that though.

DS: Yeah, don't try that at home. It should only be attempted by a trained professional such as Todd Kalas. We've seen him do that before, not only in a ballpark.

BA: Two at a time. [guffaws] [then, under his breath] What was the name of that place?

BA: After that night, sure.

If you didn't hear this clip firsthand, I can't express how creepy the 'guffaw-then-aside' move by BA was. It genuinely seemed like he didn't mean to mention it on air, but once he said it, he and Dewayne powered through as quickly as possible. This is all the info we have on "The night Todd Kalas destroyed a restaurant by walking over some chairs," but you know we'll be keeping out ears open for more. This clip went on for quite a while, but I enjoyed this shot: 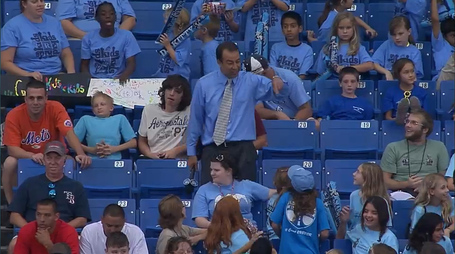 Firstly, I know TK is pointing in a friendly way, but It looks so much like he's screaming at a little kid, "You're going down!"

Next great thing here is the two kids next to the Mets guy on the left. The kid in the blue is either puffing his chest or is seriously ripped. It reminds me of the scene in Caddyshack here all the guys in the pool suck in their guts when Lacey walks by. The kid to the right looks like a stoner Muppet and the guy below them in the blue shirt looks like Shooter McGavin after a few too many crappy breakfasts.

The time warp, the big guns, and a "Maddon Presser" after the jump...

For our on-field segment of the week, we go back in time to the top of the second when Jose Lobaton got a surprise facial (h/t Paul Ellis):

Did that clip just blow your Face/Off? There's a reason catcher's equipment is called "the tools of ignorance." Though, given all the the people in Florida losing their faces of late, this one seems the most innocuous.

In the bottom of the third, Joel Peralta decided to give us some tickets to the gun show (h/t Collette for the GIF):

In the bottom of the eighth, there was a timely graphic on what we could expect postgame (r/a raysman1): 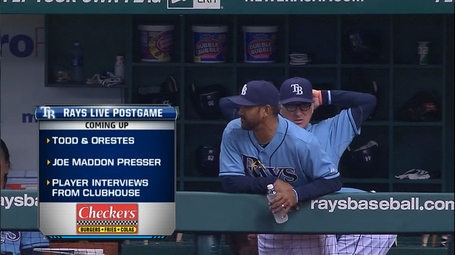 I do wonder what the interviews from the clubhouse will be like after this specific "Joe Maddon Presser." Hands behind his head, he makes it look so easy, doesn't he?

We arrive back in time to witness a surprising display of fan awareness in the top of the seventh inning:

To everyone who remembers this famous display of fantardation: let this be a reminder that all fans are not created equal(ly inept). Watch how the gentleman ducks out of the way for Jennings to get the ball. Yes, maybe he's cowering in fear, but, even so, weren't we conceived as a baseball-fearing nation? It was a nice play by Jennings that, given the current string of overzealous fans, could have been blundered. Now, if the Red Sox LF is going for that ball, I encourage all fans to go for it. Here's to good, thoughtful fans!

Humpday brought us the annual Rays broadcast auction. Up for grabs were a Joe Maddon social, an executive-for-a-day package, and a Carlos Pena hitting lesson (jokes have been made). It was an exciting time. Especially seeing Todd Kalas work that laser pointer in the top of the fourth:

Quick hands. Wonder if he can play third. Here's another for you GIF-lovers:

Back to the Future we go, and we arrive on...

In the bottom of the third, Fernando Rodney seems to have ditched the gladiator mask in favor of a softer approach (h/t pudieron89): 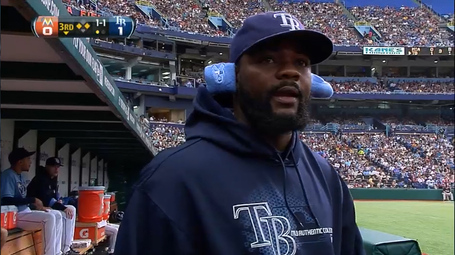 Yes, he's wearing wristbands on his ears. I was going to go with a "Frankenstein's Monster" approach, but I think firemangreg got it right in the GDT when he said, "I like to call it the 'Shrek'."

We finish off this week with a Father's Day 'Thank you.' Dads, you've done a great job raising your kids. If you could do it over again, you wouldn't change a thing... except maybe buying a copy of 'Hooked on Phonics' and teaching it to your little ones (H/T Snarfalicious and PreachITBrotha):

Yes, I know this opens me up to my many grammatical errors, but keep in mind that only like a baker's dozen worth of people read this article, and oodles--yes, oodles--of people watch a Rays Broadcast. Those blue seats you see are actually filled with the spirits of couch-dwelling Rays fans. If I'm typing 140 characters to appear TV, I'm going to make sure to get it right. And, though I've compiled three separate clips in this GIF, notice that they all came within in one at-bat in the bottom of the fifth (really one pitch).

In any case, your the best dad. Noone dose it better then you. Booj it.