Share All sharing options for: The Sean Rodriguez Power Outage

Once upon a time Sean Rodriguez was a danger to left handed pitching. In 2010 and 2011 his OPS and wOBA were .817/.864 and .360/.377 respectively - very good numbers for a middle infielder. However, in 2012 those numbers have dropped all the way down to .621/.284. The batting average and on base percentage are still serviceable, it's the slugging, or lack thereof, against southpaws that has really dragged down his production.

Consider the chart below which shows his slugging percentage over his career. 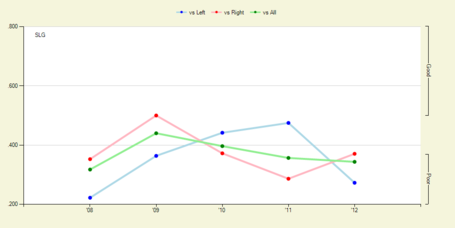 That's...not good. It's been just 68 plate appearances but it's hardly a small sample when you see that he had 167 and 136 PAs against LHP the past two seasons. He had 17 extra base hits against lefties last year and 13 the year before. He has just two doubles thus far. So what's been the difference? He's being pitched differently.

Here are the pitch type breakdowns from left handed pitchers in 2012 and 2011.

As you can see, teams are throwing him less straight fastballs (four seamers) and more two seam fastballs and a lot more sliders. The book may be out on him across the league, forcing him to adjust accordingly or see his results suffer.

You also may notice that he's swinging at far more pitches than last season, even against lefties. His overall 50% swing rate is four percent higher than last year and currently five percent higher than league average. He's walking at a good clip and not striking out too much when facing lefties, it's simply the power outage that is affecting him. His OPS is .668 when pulling the ball this season, down from three straight years of 1.000+ totals. Without access to hit f/x data it's impossible to say for certain what type of contact he's making. However, my guess would be the change in pitch selection has caused him to roll over on more balls than ever before

With the Rays without the services of Evan Longoria and Jeff Keppinger, the production from the right side of the plate needs to step up. Usually, Rodriguez is a major part of that. Unless he can find his power stroke soon it could be a long week against Gio Gonzalez, Cliff Lee and Cole Hamels.