Share All sharing options for: Luke Scott And BABIP: A Familiar Pattern?

About a week ago, I was glancing over Luke Scott's FanGraphs page, trying to figure out what was going wrong for him this season. The main culprits are walk rate and BABIP, both well below career norms. A glance at his plate discipline numbers shows that there are only two real changes in approach. Scott is swinging at way more pitches outside the zone than he ever has before (37.1% this year compared to 25.5% career), and he's also making contact on way more of the pitches he swings at outside the zone (64.2% this year compared to 53.0% career).

Now it's easy to see how this would lower his walk rate. Not only is he taking fewer balls, but he's ending his at bat on pitches he used to take for balls. It seemed to me, though, that I'd seen this pattern presented before, in conjunction with (and causal for) a player's lowered BABIP. The logic goes that if a player is swinging more frequently on balls outside of the strike zone, and making contact more often on those pitches, he's probably taking defensive swings rather than squaring the ball up and driving it, and the result is weak contact.

I decided to see if there really was something to this pattern of raised O-Swing%, raised O-Contact%, and lowered BABIP.

To start off, I pulled from FanGraphs those three stats for all players who had 500 plate appearances in a single year from 2005 till 2011. I then calculated the year to year changes for each player. My intention was to look specifically at instances where both the O-Swing% and the O-Contact% went up by at least 5%, and see what the affect on BABIP was, but I was immediately confronted by a peculiarity of the data set. It's not the least bit symmetrical.

Why should this be? Perhaps players get more aggressive as they age (I thought it was the other way round). Perhaps it has something to do with a selection bias introduced by limiting the sample to players with 500 PAs. Maybe hitters who are able to swing at fewer pitches outside the zone than their true talent level would suggest perform better, and hence are given at least 500 PAs. The following year, they are given the PAs again, on the basis of their previous good performance, but their plate discipline regresses. Clearly something is biasing the data. However, I doubt a man like Admiral Farragut would have ended his BABIP study at this point, so neither will I. Let us press on.

In this same set of 622 year to year changes, a batter's O-Contact% went down (by any amount) 159 times. It went up 432 times. This suggests that the two measures, O-Swing% and O-Contact%, are related, because they're both behaving asymmetrically. Maybe one influences the other, or maybe they're both influenced by the same selection bias (an r-squared of .05 hints that the relationship is not causal, or at least not strongly so). Luke Scott's situation, while extreme, does not appear to be unique. There is a tendency for O-Swing% and O-Contact% to creep up together.

But what is the effect on BABIP? Returning to my arbitrary cutoff point, there were 62 instances of a player raising both his O-Swing% and his O-Contact% by at least 5%. That player's BABIP went down 37 times, and it went up 24 times (staying identical once). This does not convince me that I've found a pattern. For those interested in the numbers, the correlations between O-Swing% and BABIP and O-Contact% and BABIP in this sample are both worse than between O-Swing% and O-Contact%, and not worth mentioning, other than for saying that they aren't worth mentioning. This isn't altogether surprising, as we already know that BABIP is quite volatile within the sample size of a single season, but it reinforces the point that it's probably incorrect to try to justify changes in BABIP by looking at a player's plate discipline numbers.

Let me leave you with a visual representation of noise. 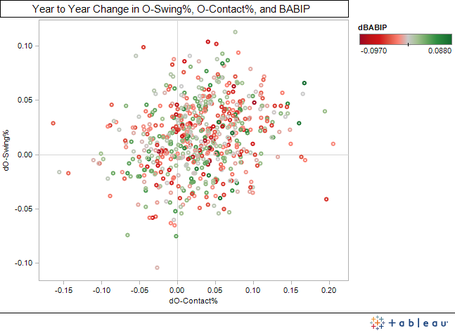