Share All sharing options for: Is Hideki Matsui Done?

There comes a point in every player's career when they are just finished. Age catches up to everyone. For some, it comes early; for others, later. But if there is one guarantee about a player, it is that there will be an end to their playing career.

Given Hideki Matsui's awful performance thus far, many have wondered if Matsui has reached that point. I am one of those who believes that Matsui has reached the twilight of his career and that it is in the best interest of the Rays to release him when Scott returns. There are several reasons for this belief, which are outlined after the jump.

When Matsui first was promoted and soon after launched two homeruns, I was still cautious. A quick observation noted that Matsui was often swinging early in the count and when he was ahead. This type of approach is not uncommon among aging players; it suggests desperation. A veteran hitter will try to jump ahead and "cheat" on pitches. Judging by Matsui, this approach works until the opposition adjusts. Here is a glance at his swing rates in different counts.

The counts to pay attention to are the "hitter's counts", when the hitter is ahead in the count, and the 0-0 count. The swing percentage in counts with two strikes depends on the amount of strikes thrown, since the hitter can't afford to watch strike three or take an aggressive hack.

The only true "hitter's count" in which Matsui has swung less often is the 2-0 count. In the 3-0 count, the 0-0 count, and the 3-1 count, he is swinging more often than usual. It is reasonable to assume that he might be "cheating" at the plate. In other words, he is guessing on pitches and gearing up to drive the ball, hoping that the pitcher will give him a hittable pitch over the heart of the plate.

So far this year, Matsui has hit terribly. He is currently hitting worse than players like Sean Rodriguez, Will Rhymes, and Jose Molina. As a bench bat or designated hitter, that simply isn't acceptable. Most of the peripherals and components are also headed in the wrong direction. And though it isn't a completely objective analysis, it appears he has rolled over many pitches, hitting weak groundballs. 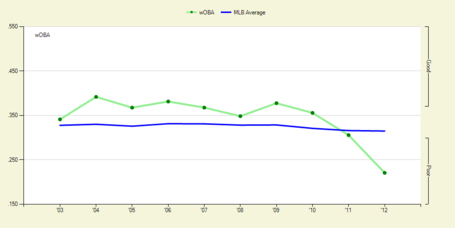 While there have been claims that he has gotten "unlucky" with so many balls dying out at the warning track, this chart, while not perfectly accurate, illustrates his spray chart in a normalized ballpark.

As seen, there have been two balls that have reached the warning track and not left the park. The numbers are not readily available for comparisons, so it is debatable if he is unlucky compared to other players. Yet, even if he has been unlucky by one homerun, that still doesn't improve his statistics by a significant amount.

This year is Hideki's tenth MLB season, and he is 38 years old. Only Omar Vizquel, Jim Thome, Jason Giambi, Chipper Jones, Raul Ibanez, Henry Blanco, and Geoff Blum are older than Matsui this year among hitters. Since 1990, only 24 out of 73 individual seasons in which the player was 38 years of age or older have resulted in a 110 or better OPS+. Out of those players, only Carlton Fisk, Steve Finley, and Raul Ibanez had a lower career OPS+ than Matsui. In other words,few players in history of his age and of his previous talent level are adept hitters.

During the offseason, the 14 AL teams all had the opportunity to sign Matsui given the DH position. Even some of the NL teams could have signed him as a bench bat who could occasionally play LF. Yet, not one of these teams signed Matsui. While teams like Boston, Kansas City, and Chicage (White Sox) had available options to DH, many teams lacked a player suited for the role. The Rays were one of these teams, but instead opted for Luke Scott at 5 million dollars.

The terms and details of Matsui's demands are not publicly known, but there was never any indication during the offseason that he did not want to play or desired an unreasonably high salary. Matsui himself admitted that the Rays were the only MLB team to offer him a contract.

Matsui wasn't given an option to play for an MLB team until the Rays, with their hands forced by injuries, signed him for depth.

With Luke Scott expected to return tomorrow, it should not be a surprise if Matsui is the player left without a roster spot. Options such as Brandon Allen, Stephen Vogt, and maybe even Leslie Anderson or Henry Wrigley make an ineffective Matsui expendable.

There is a slim chance Matsui still has gas left in the tank, but, realistically, the odds of him performing at a high level in this stage of his career are faint at best. In 2010, Hank Blalock received 69 plate appearance (86 wRC+) before being released; so far, Matsui has collected 79 (37 wRC+). His strikeout in today's game may have been his last plate appearance with the Rays or any MLB team.

Hideki's career has been a successful one, with a wonderful performance in the 2009 World Series as a highlight. But right now, the Rays have to look beyond past success and determine if Hideki Matsui is "done."