It was fun this off-season to see some prognosticators picking the Rays to win the American League East, to win the league, or to even win it all in some cases. It is not fun to wake up this morning and see the Rays tied with the Red Sox, a team most here have called a complete train wreck.

The team that once could do no wrong on the road suddenly finds itself below .500 away from Tropicana Field for the first time since the 2009 season when the team went 32-49 as it limps home from an eventful 3-6 road trip that ended with a sweep to the Kansas City Royals. If the season were to end today, there would be no joy in Mudville now that Debbie's flood waters are retreating as the Orioles and Angels would be squaring off.

Every fan has their main reason why the Rays are struggling this season; which one of the ones below is yours?

As the audio on the radio commercial states, "PItching and defense is in our DNA. We cannot escape what we are." Not that the club certainly has not tried to do so on the defense end, but that is how this team is designed. Even with the increase in payroll this off-season, there were known issues on the offense. The bats at catcher and shortstop were going to be a challenge. It was uncertain how Luke Scott would bounce back from shoulder surgery or how Pena would handle lefties this season. Which Desmond Jennings would show in 2012 - the one that burst through the gates after his callup or the one that limped toward the finish line? Could Matt Joyce finally be that every day player and would Upton go out on top in his final year donning a Rays uniform?

The simple fact is nobody is happy with how the offense has performed this season but the projected production is going to suffer when the team has six of the eight positions and the DH role affected by injuries on this season that is now 46 percent complete. Every team is dealing with injuries this season, but the Rays are dealing with injuries to the heart of their lineup and thus forcing hitters into spots they are not fit for or giving guys more playing time than their talents deserve simply because there are no other options.

The chart below shows how each Rays player with a minimum of 50 plate appearances is stacking up against their projected wOBA figure that ZiPS had for each player at the start of the season (click to enlarge): 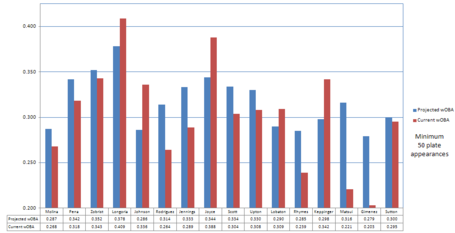 Only five hitters have outpaced their projected wOBA to date: Evan Longoria, Elliot Johnson, Matt Joyce, Jose Lobaton, and Jeff Keppinger. The bad news is that only Johnson has been able to escape the disabled list this season while the other four have spent at least three weeks on it. Losing overachievers has resulted in giving plate appearances to underachievers such as Chris Gimenez, Hideki Matsui, and Will Rhymes who have all significantly under-performed their projections. Sean Rodriguez needs to be lumped into that group as well because he is under-performing his projected wOBA by a full 50 points so far.

"The pitching has not been as good as advertised"

The pitchers have a collective 7.6 fWAR, which ranks 18th in baseball while their 3.89 FIP is 14th best in baseball. Injuries have been an issue as Jeff Niemann went down early, Jeremy Hellickson fell two weeks ago, and Kyle Farnsworth has yet to throw a pitch for the team this season. Some of the numbers also come from the inexperienced pitchers on the staff as Brandon Gomes, Dane De La Rosa, and Josh Lueke have allowed 26 percent of the earned runs charged to the bullpen despite throwing just seven percent of the bullpen's total innings this season. Fernando Rodney, Wade Davis, and Jack McGee have much better than people expected while the results with others has varied (click to enlarge):

The AL East has had its fair share of injuries this season. The Yankees have been without Brett Gardner nearly all season, lost Mariano Rivera early as well, and never got to see Michael Pineda throw a regular season pitch. Boston has had nearly every outfielder spend time on the disabled list and is now without the services of Josh Beckett and Clay Buchholz. Baltimore has missed Nolan Reimold after a hot start and just recently got Brian Roberts back.

The number of positions affected by injuries has been the real impact with the Rays. The team was built on pitching and defense and it has been able to withstand the injuries to Niemann, Hellickson, and Farnsworth because it had the pitching depth on hand to do it. What it did not have was the depth to cover the amount of injuries in the lineup as every position but first base and shortstop has lost someone on the depth chart due to injury. 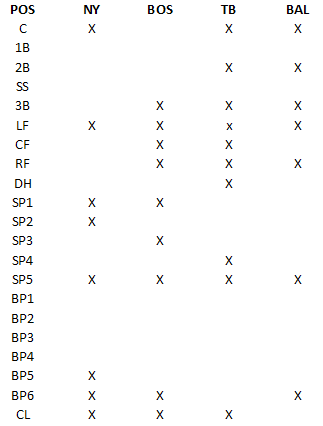 There is no way to polish this turd; the defense has been painful to watch. Throwing errors, botching routine plays, missing the cutoff man, catcher's interference. You name the defensive transgression and the Rays have committed it this season. 64 errors on the season which is second worst in the American League. The breakdown of errors on the roster is as follows: 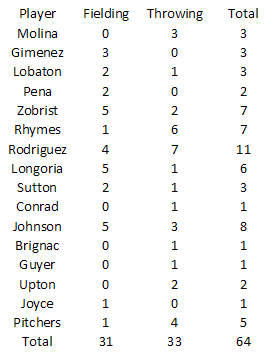 19 of the 64 errors have been committed by players forced into increased playing time due to the aforementioned injuries, five of which are catcher interference calls. Another 19 errors have been committed by the shortstop platoon of Johnson and Rodriguez with the caveat that neither have played the position exclusively all season. As a few of us have come to say on Twitter, #replacementleveldefense. Baseball-Reference shows that the Rays have used 59 different defensive lineups this season through the first 75 games played. Compare that figure to the Yankees who have used 45 different lineups, the Orioles who have used 53, and the Red Sox who have used 52. A part of that may be just Joe being Joe, but most of it is related to the injuries.

It has been mentioned on the broadcasts a few times that the Rays' complete lineup has been together for only eight games this season. It is impossible to judge the true talent level of this team right now because there have been so many moving parts in the lineup and the depth chart. In the next week to ten days, the regulars may finally get their chance to play their ninth game together this season. They have a tough road ahead of them should they hope to get back into the post-season, even with the extra wildcard spot in play.