Monday Morning Wrap Up: Rays Enjoy Their View From Atop The Crowded AL East

Share All sharing options for: Monday Morning Wrap Up: Rays Enjoy Their View From Atop The Crowded AL East

The Rays recovered from being swept by the Chicago White Sox to take the series from the Baltimore Orioles to finish the week at 2-4 and with an overall record of 31-23 find themselves in sole possession of first place in the AL East. The Rays have been using Carlos Pena in the leadoff position and hopefully this will come to an end as the Rays should be getting Desmond Jennings back off the disabled list as they head to New York to take on the Yankees.

The return of Desmond Jennings to the top of the Rays lineup will hopefully coincide with BJ Upton taking over the 2-hole. The dynamic duo at the top of the lineup should help spark some rallies with their ability to get on base and cause disruption once there. The Rays big problem with their offense has been the inability to get runners on base.The chart presented below shows the rolling 10-day average of runners on base defined by hits + walks + reach base on error + hit by pitch. 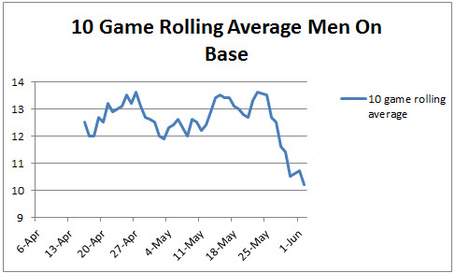 After a day off Monday the Rays will travel to New York to take on the Yankees for three before flying south to take on the Marlins over the weekend.

The Baltimore Orioles travel to Boston to take on the Red Sox for three games before heading to Philadelphia to play the Phillies over the weekend.

The New York Yankees will host the Rays for three games and then welcome the Mets for a weekend series.

The Boston Red Sox will host the Baltimore Orioles for three games and then the Washington Nationals for a weekend series.

The Toronto Blue Jays will travel to Chicago to play the White Sox and then to Atlanta to take on the Braves in a weekend series.

May 28th: Activated Jose Lobaton from the disabled list and optioned Chris Gimenez to AAA Durham.

May 29th: Called up Hideki Matsui from Durham and option Stephen Vogt to Durham. To make room on the 40-man Brandon Guyer was transferred from the 15-day to the 60-day disabled list.

Brandon Allen begins a rehab assignment at Port Charlotte (High A) on May 17th. Entering Sunday he had played 12 games, all in Charlotte, and has a slash line of .250/.358/.386 with 12K/8BB. His 20-day rehab stint will end on June 5th and the Rays will be forced to add him to the 25-man roster or designate him for assignment. Based on the amount of time spent at the high-A level it appears that the Rays are not interested in adding him to the 25-man roster rather they are keeping him in baseball shape but at such a low level that it would discourage another team from claiming him on waivers.

Evan Longoria continues to progress and has not had any setbacks. He will travel with the team on this weeks road trip because he has progressed to baseball related activities. The Rays are not pushing the timeline up for his return and expect him to begin rehab games by June 15th and hope to have him back at or near the end of the month.

Desmond Jennings will travel with the team on this weeks homestand and may be activated during the New York series.

Kyle Farnsworth has been throwing fastballs off the mound and is nearing a possible rehab stint. If there are no setbacks during his rehab assignment he may be back near the latter half of the month.

The Rays have the 25th pick in tonight's amateur draft.

What Does Sternfan1 Have To Say?:

G'morning Rays fans Let's start this out on the thought that all's well that ends well. Our Rays took two of three from the Orioles and we're now in sole possession of first place in the ALE. It seems hard to imagine in a week that saw us go 2-4 and get swept for just the first time since the opening weekend series of 2011, this time by the high flying White Sox.

It was also nice to see the offense put eight runs on the board yesterday although the Orioles defense helped by kicking it and throwing it around a bit too much. The offense, whether it's plugging the bases or scoring runs continue to plague this team.

It appears at the time of this writing that Desmond Jennings will be in the line up Tuesday in New York, so that certainly will help. Jake McGee has really become a back end beast that Joe is relying on more and more. And it's quite remarkable considering where he was at the start of the year. Overall the SP has been really good and ultimately that should prove priceless in the months ahead. It's on to two tough series versus the Yankees and Marlins so things aren't going to be easy.

Chris Sale is a very hard throwing tough left handed starter. Accordingly, and to some dismay, Joe Maddon sat Carlos Pena, Matt Joyce, and Luke Scott producing a lineup of Rodriguez, Upton, Zobrist, Sutton, Lobaton, E.Johnson, Rhymes, Molina, and Thompson. Sale dominated that lineup in going 7.1 innings allowing 1 run on 3 hits while striking out 15 and walking 2. Matt Moore was nearly as impressive in his 7 inning of work striking out 10 and walking 1 but gave up a mammoth 2-run homer to Adam Dunn.

Accordiing to Elias, the last time opposing starters age 23 or younger combined for 25 SO was July 31, 1901, when CHC Tom Hughes had 15 SO and CIN Noodles Hahn had 11 SO—each going the distance in a 14-inning game…the last time opposing starters age 23 or younger each had 10-plus strike¬outs was July 21, 1971 when CLE Steve Dunning had 10 SO and OAK Vida Blue had 11 SO (12-inning game) - Rays Game Notes

Hideki Matsui made his debut with the Rays and smashed a home run but the White Hot White Sox came back to score 7 unanswered runs. The White Sox kept putting the bat on the ball and the ball kept finding its way through the infield for base hits. Shields gave up 6R/5ER on 10 hits in 6 innings. 9 of the 10 hits Shields gave up were singles.

"I hate facing [Shields] because he's good. You know you're going to get three tough pitches," Pierzynski said. "I'm sure he hates me getting a hit off him, and I hate making outs off of him. It's fun to face him. He's a great pitcher, he's an All-Star guy, a big-game guy. He wants the ball in big situations." - mlb.com

A.J. Pierzynski's played the role of instigator, some may use another choice word, but he did slide hard into Ben Zobrist to break up a double play in what can only be deemed a dirty play. 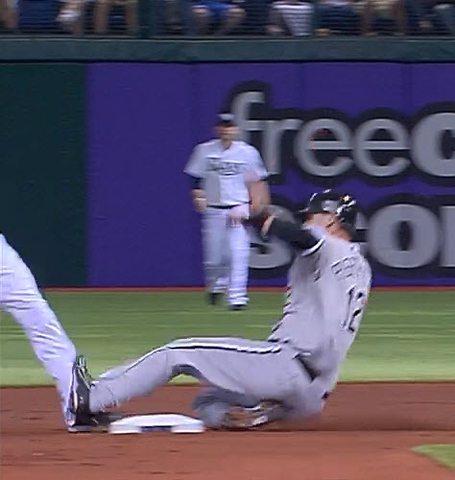 The Rays were swept by the White Sox in a game that featured A.J. Pierzynski getting hit by a pitch and the White Sox retaliating (wait, what) by throwing behind Ben Zobrist. The Rays did put runners at 1st and 2nd with 1-out in the bottom of the ninth but Ben Zobrist hit an infield pop up and B.J. Upton flied out to end the game.

"Up until the ninth inning, we had zero runners left on base," Rays manager Joe Maddon said. "So we're playing hard. But we're also making mistakes. We're not playing a high level of baseball right now -- too many mistakes on the field, things that we're not used to doing. ... We have to do a better job, whether it's catching the ball or having better at-bats." -mlb.com

Joe Maddon on getting swept:

"It's not fun [getting swept]," Maddon said. "They're all close games, even yesterday's game. ... We don't like that. We came off a good series in Boston where they were all very tightly contested games. ... So it's no fun. We have a day off to think about it, [then] we'll come back and play the Orioles. We're battling with them right now." -mlb.com

The Rays put up 5 runs in the first inning including a 2-run blast off the bat of Hideki Matsui. David Price once again worked 7.1 scoreless innings allowing 4 hits while striking out 5 and walking 2. A key play for the Rays came in the 6th inning when B.J. Upton caught a would be sacrifice fly and threw out Steve Tolleson before Wilson Betemit crossed home plate to end the inning.

"[The double play] was outstanding," manager Joe Maddon said. "I think Hall actually ran pretty good. He looked like he ran well. But you have to be aware on that play. Even the runner going into second base has to be aware. If you see you are going to be out, you have to make sure that the run actually scores. [It was] really a fortuitous play for us to be able to do that. ... It's a bad situation, [Adam] Jones is on deck. It's not really cool. So to be able to get out of it like that is outstanding for us." - mlb.com

The Rays bats were held silent by left hander Brian Matusz.Jeremy Hellickson pitched an outstanding game going 6.2 innings and giving up 2R/1ER on 4 hits while striking out 8 and walking 1. The key play of the game came with runners at 1st and 2nd in the 7th. Hellickson got the groundball to Drew Sutton but he threw wildly at first allowing the go ahead run to score. The Orioles would have added a second run on the misfire by Sutton if not for a solid throw to the plate from Ben Zobrist. The Rays had an opportunity to tie the game in the bottom of the ninth. Ben Zobrist came up with the bases loaded and 1-out and grounded into a game ending double play.

Joe Maddon on the lack of defense:

We're making too many mistakes out there," Maddon said. "The catcher's interference out there, that's an awkward play. If I were to look at the video, it just looked like Flaherty's swing was really late, just trying to protect. That's the same exact thing that happened to [Chris] Gimenez in Texas, a late, protective swing that somehow hits the catcher's mitt.

"And, of course, the play to third base. Sutt's done a great job down there. That's a play he's been able to make and we don't make it. That's how you lose these games. We have to play that play better, but we also have to hit more consistently." -mlb.com

The Rays defeated the Orioles 8-4 as Matt Moore won his second game of the year. With the win the Rays regain sole possession of first place in the AL East.

Manager Joe Maddon (On the win): "The part of that game that goes really unrecognized is Elliot’s [Johnson] slide into second base that extends the inning and permits us to score all those runs. That’s a big play in today’s game. Matt [Moore] really held it together well, had good stuff. But they were having good at-bats. I’ll give the Orioles a lot of credit. They were good at-bats against him that entire game. I was really pleased with the way we worked through those moments with Matty. Jake [McGee] was spectacular of course. And Wade’s [Davis] first inning he had great stuff, not just okay stuff but great stuff. We caught the ball pretty well, we made one mistake. So, more of a complete game than we’re normally accustomed to." - Rays Game Notes