Share All sharing options for: 2012 MLB Draft: Ranking The Teams

Tonight, with the 25th overall pick, the Tampa Bay Rays will select a player in the MLB draft. Thirty out of the past forty-six years, players selected with the 25th pick have made the major leagues. Some, like Matt Cain, Matt Garza, Mike Trout, and Bill Buckner, made (or will make) an impact at the MLB level. Most did not. Such is the way with the MLB draft. Many players are selected, yet few make the major leagues.

Because of the long odds, drafting and developing these players is a highly sought after skill. Whether due to talent, hard work, or just plain old luck, some teams have had better success at drafting than other teams. Because of the control teams have over drafted players, succeeding in the draft is important for each and every organization, whether it is the free spending Yankees or the financially constrained Rays.

When Friedman assumed command of baseball operations after the 2005 season, he was given the task of rebuilding an organization that suffered through many losses with far too few victories. Under his helm, the Rays have developed a winning ballclub, most of which is homegrown.

There is often fierce debate over the Rays drafting process and results since Friedman took command (even though R.J. Harrison, who became the director of amateur scouting in 2006, has a stronger influence over the draft picks). Some laud the Rays ability to identify unknown talent in the later rounds, while, conversely, others point towards an organizational lack of hitting at the upper levels as a sign of drafting struggles. However, given the general struggles of drafting across for MLB teams, the Rays draft results must be compared to their fellow teams.

After the jump is a look at how the Rays draft success matches the other AL teams.

In order to grade the drafts from 2006-2011, it is important to take into account all of the players each team drafted, whether at the major league or minor league level and whether or not the player is still within the original organization.

Using my previous prospect study and Victor Wang's studies, I gave each prospect a value, which was then assigned to the team that drafted them. Some of the player's have already reached the major leagues, so their value was regressed based on their MLB performance. For players with three or more years of major league experience, their former prospect grades were not taken into account. These totals were collected and added together.

The main issue with comparing the results of these different teams is that each team has a different expected value. A team with several #1 overall picks is surely expected to do better than a team that always drafted at the end of the first round. To account for these differences in order and quantity, I gave each team an adjusted baseline of expected value for the first three rounds. Thanks to prior research, the expected net value for each pick can be found using a simple formula. Using this, I set the individual baselines for each team ("expected value" in the chart).

I did not account for any picks past the third round, since each team has one pick per round and the total expected values are extremely similar. While teams should expect to collect, at least, some value from the later rounds, I eliminated this expected value. Because each team has the same (or very close) expected value from rounds 4-50, it does not affect the rankings. After all, you can subtract value from both sides of the equation with no change to the actual equation.

Now, here are the rankings. "Expected" refers to the expected value based on pick quantity and order from rounds 1-3. "Total" refers to the total WAR value from the drafts. The "Net" refers to the net value, in other words, the "Total" minus the "Expected". The numbers are in terms of Fangraph's WAR. 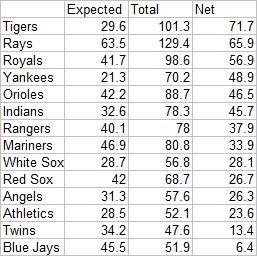 As can be seen, the Rays have done well at drafting since 2006, accumulating more total value (in terms of WAR) than any AL team. Only the Tiger's have outperformed their expected value by a larger margin than the Rays, which I found to be mildly surprising. It turns out that several teams with a good reputation for drafting are ranked low on the list, such as Boston, Los Angelels, and Toronto.

Regardless of whether you think the Rays drafting has taken a bad turn recently, the Rays have outperformed all but one AL team when it comes to net value. The Rays can not afford to spend what New York, Boston, Toronto, and even Baltimore do, so to stay competitive, they need to continue making these prudent drafting decisions and try to develop them into the best players they can be.