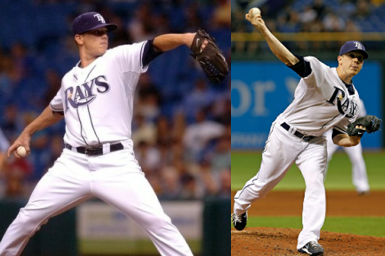 Notice the difference in how Jeremy Hellickson grips his curveball? One image is from the first half of last season and the other is from a recent start in May. It turns out he does everything rather quietly because that grip change started around the all-star break of last season.
Tampa Tribune's Roger Mooney asked Hellickson about the grip recently and Jeremy admitted that he started using the grip around the all-star break after talking to James Shields. Sure enough, there was an article written last season by MLB.com's Anthony Chaing that Tommy Rancel directed me to that talked about the process behind that change:

Before Hellickson's last start, Shields worked with the rookie on his curveball, changing his grip. The results were evident as Hellickson turned in seven innings and allowed just two runs, while striking out seven Yankees on Tuesday.... "What I thought I saw [Tuesday] was better depth on the hook," manager Joe Maddon said.

Hellickson changed his grip so that he uses his middle finger to spin the baseball more than he used to on his curve. "We changed his grip up a little bit," Shields said. "He has got a really good curveball. I just think that he wasn't trusting it as much as he wanted to.

He put the time and the work in to be able to do what he did." Despite all of that, Hellickson still doesn't feel comfortable enough with the pitch to throw it early in the count. "I feel like it's a good pitch for me right now with two strikes," he said. "I'm still working on throwing it for [early] strikes."

Those were Hellickson's comments after his first outing with the new grip. Let's look at how his curveball looks different since the work he put in with future pitching coach James Shields.

Different pitchers use different curveball grips for different reasons. Maddon pointed out that the grip gave Hellickson better depth on his pitch. To gain a better understanding of why a pitcher would prefer one grip over another, I asked former pitcher Toby David to explain what he did during his collegiate and minor league career:

A lot of pitchers feel that you can get "tighter" rotation and sharper break on the knuckle/spike curveball. Also, many pitchers throw it with better velocity than their previous CB. From personal experience, I toy'ed with a spike CB my last yr of pro ball, but didnt "get it". I couldnt get a feel for it, and wasnt properly instructed how to throw it.

But earlier this yr when I was messing around over at Jesuit baseball practices, my friend and former MLB pitcher Geoff Goetz showed me the proper was to throw a CB. It DEFINITELY had sharper break than my traditional grip CB, and the velo was much better as well.

The average horizontal break on is curve has dropped from 9.8 to 8.4 but the change is more noticeable on his vertical movement as it has dropped to -8.36 this season while it was -3.2 last season. That has helped lead to some early season changes in his curveball outcomes compared to last season:

In a piece this past November about Hellickson's issues against left-handed hitters, I proposed the following conclusion:

Hellickson adding another pitch to use against lefties, whether it be tightening up his curveball or changing where he prefers to locate it, would help give Hellickson reduce his splits between righties and lefties.

The tightening of the pitch has already been demonstrated but notice how Hellickson has also changed the location of where he spots his curve this season. Compare 2011 (first image) to 2012 (second image): 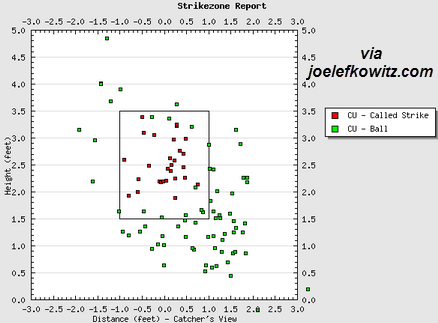 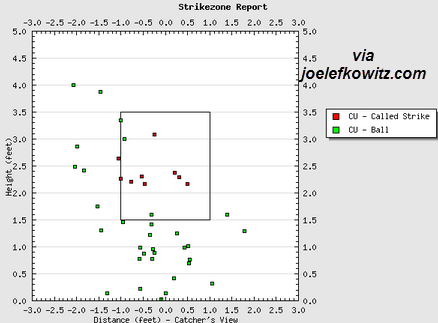 In 2012, Hellickson's strikeout rate is up, his walk rate is down, and he continues to out-pitch his FIP just as he did last season. It is nice to see a second year pitcher coming off a successful rookie campaign be open to coaching and make the necessary adjustments to stay one step ahead of the hitters and the evolution of Hellickson's curveball has definitely been a part of what has allowed Hellickson to remain successful so far in 2012.