Who Is The Real Ben Zobrist?

Share All sharing options for: Who Is The Real Ben Zobrist?

Since the beginning of the 2009 season Ben Zobrist has put up some numbers that put him in elite company in the American League. Entering Tuesday's action in New York:

With the exception of a rather poor 2010 season Zobrist has delivered for the Rays posting a wRC+ of 125 in 2008, 153 in 2009, 103 in 2010, and 131 in 2011. He provides the Rays with a switch hitter that can hit anywhere in the lineup, he's played the 4th most games in the majors since 2009, plays multiple positions, can move on the bases as indicated by his 77% career stolen base success rate (72 SB/22CS), gets on base, collects extra base hits, and since 2009 has posted a 126 wRC+.
Additionally, He has had an extremely team friendly contract that paid him a league minimum salary from 2008 through 2010, 4.5 million in 2011, and 4.5 million in 2012. His current contract has him scheduled to make 5.5 million in 2013 and a club option of 7.0 million in 2014 (2 million buyout), and 7.5 million in 2015 (0.5 million buyout).
Unfortunately, we live in a what have you done for me lately world. A time when a poor month by players like Luke Scott and Carlos Pena brings up the discussion of poor contract, age, worry, and other negative connotations and the stats proving the negatives flow freely.
So, who is Ben Zobrist and will he rebound from a poor start this year and if so to what level?

Based on the numbers presented between 2009 through this year Zobrist is certainly an above average major leaguer, his versatility makes him a valuable asset, and his contract makes him an extremely affordable asset.WIth that said some still feel Zobrist is in decline and hasn't been the same since getting off to a good start of 2011 - so for those who like to note trends and not necessarily the 500 PA metric established above I will present the month by month data below. 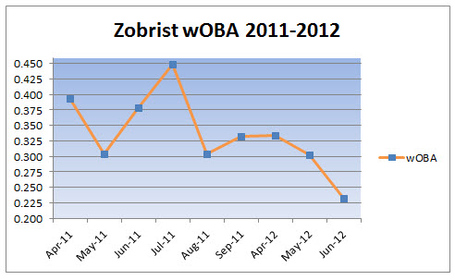 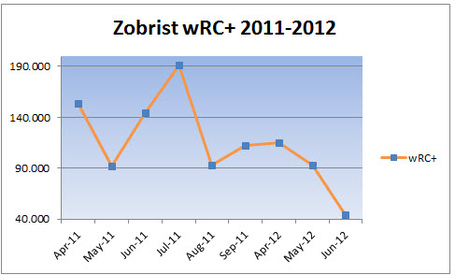 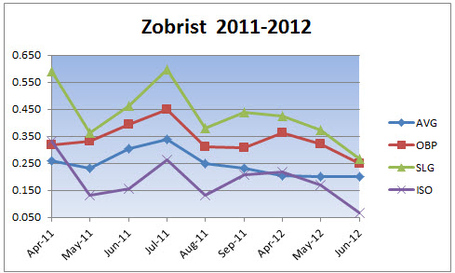