Zorilla Gets His Groove Back As Rays Gut The Fish

Share All sharing options for: Zorilla Gets His Groove Back As Rays Gut The Fish

The Rays' wives opened up the day by trouncing the Marlins' wives 14-2 in a charity softball game to raise money for Autism. I imagine the wives then went into the dugout and taunted the players and told them that hitting and scoring runs is not terribly hard to do. Apparently, the men took the challenge to heart tonight as they plated 13 runs on 14 hits in tonight's 13-4 victory over the Miami Marlins.

Ben Zobrist came into this interleague series with is batting average at an even .200 and was the topic of much debate on this site this week as people wondered what Zobrist had left in the tank. After all, a .200/.331/.374 slash line on June 7th is not what anyone expected of Zobrist but this trip down to South Florida has helped him rediscover his statistical youth and lead the Rays to two straight victories over the Marlins.

This game marked the third straight game in which the Rays have compiled ten hits or more in a game after failing to do so in the previous 12 games (h/t @RaysGameday). This was surprising given the fact the first five spots in the lineup were a combined 3 for 20 on the evening but the bottom of the order did the heavy lifting in this game.

Zobrist, Elliot Johnson, and Jose Molina hit in the bottom third of the lineup and were 9 for 12 and drove in 10 of the team's 13 runs. Even the pitchers joined in on the fun as Matt Moore joined in on the fun and drove in a run with a sacrifice bunt and Wade Davis singled in his only plate appearance. Seeing the team effort was fun to watch, but Zobrist was clearly the man of the evening.

Zobrist reached base in all five plate appearances this evening. His first plate appearance was a walk to load the bases in the 2nd inning and in his next plate appearance, he hit an absolute bomb of Carlos Zambrano that went off the facing of the second deck in right field. He repeated the home run feat in his next plate appearance as he hit the ball 360.5 feet to clear the 360 feet point of the right field fence. He followed that up with a line drive single and then another walk in the 9th inning giving him a perfect 3 for 3 night with four runs, fourruns driven in, and two walks while raising his slash line to .218/.350/.416. In this series, he has raised his OPS 59 points from .705 to .766 and his slugging percentage 42 points from .374 to .416.

Elliot Johnson and Jose Molina also had their hitting shoes on tonight as they went 6 for 9, drove in six runs, and scored four times as a deadly duo in the 7th and 8th spots of the lineup. Overall, the team had six walks and just three strikeouts marking just the eighth time all season the Rays have struck out three times or less in a game and the first time since May 22nd in a win against Toronto.

For five innings, Matt Moore looked fantastic. He was throwing all of his pitches for strikes and pounding the lower part of the strike zone. The only early hit he allowed was a cue shot double that went off the very end of Giancarlo Stanton's bat but things fell apart in the 6th inning as Moore ran out steam and Justin Ruggiano was able to exact some revenge against the team that released him last season. In that inning, Moore walked Jose Reyes on four pitches before forcing Omar Infante to pop up and allowing a single to Hanley Ramirez. Moore then got Stanton to roll over on a change-up that became a swinging bunt of an infield single to the left side setting up Ruggiano's plate appearance.

Moore started him off with a changeup for a strike and attempted to double up on that pitch but threw it in the dirt. Pitch three was an inside fastball that missed and the next pitch was yet another changeup that Ruggiano swung and missed at. After missing with another inside astball to run the count full, Moore did the logical thing and threw yet another inside fastball tjat Ruggiano hit it to the Bay of Pigs in Cuba. Moore had not thrown anything but fastballs and changeups that entire inning to that point so Ruggiano only had to guess between two pitches. Moore finally threw a breaking ball in the next plate appearance to Austin Kearns as he struck him out on three pitches with a fastball, curve, and a changeup in order.

Moore threw 102 pitches on the evening, with 66 finding the strike zone. He was able to get 20 swings and misses on the evening, 14 of them coming off the 78 fastballs he threw on the evening with the other six coming on changeups. His plot for the night looked like this: 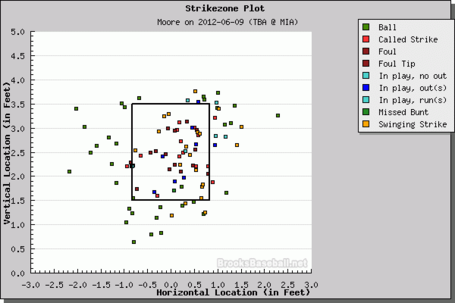 The Yankees beat the Mets again and Adam Jones hit another walk-off home run for the Orioles while the Nationals are set to sweep the Red Sox as the Rays attempt to do the same against the Marlins tomorrow. More importantly, on June 9th, despite all of the injuries, the Rays now own the best record in the American League with a .576 winning percentage.