Share All sharing options for: This Week in Sun Sports: Magic Mike Edition

Welcome back to This Week in Sun Sports, kids. As always, we'll be looking at the oddities of the Rays broadcasts from this past week. Anything from the announcing, to a crazy video segment, to the fans in the stands. If it's on Sun Sports, we see it. Because-- like Heimdall, Guardian of the Bifrost--we're always watching.

This week covers Tuesday, July 3rd- Sunday, July 8th. If you missed last week's, you can find it here.

I generally refrain from commenting on the commercials (except that one time), but this promo just spoke to me. In the run up to the July Fourth holiday, Sun Sports wanted to let us know how much they loved America. 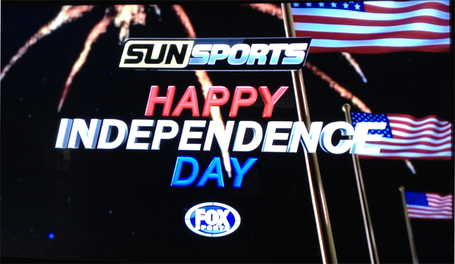 Apparently as much as a used car dealership. The CGI fireworks and waving flags, were vintage 90's. I'm talking like 'hacking the Gibson' in Hackers bad. Now, if you'll excuse me, I have to go put a down payment on a 1994 Isuzu Trooper.

A call from the 'pen, a new rom-com, and some Magic Mike action... after the jump...

In the top of the fourth, Nick Swisher's swing was not so sweet (h/t Rjw123):

This is like the baseball version of 'racing for pinks' (not a euphemism; actually it might be, I don't know). Swisher loses the bat, looks back, and is like, "Aww, screw it." Now he's gotta go home and explain to his mom how it's her fault that he lost her Honda Civic because she wouldn't install the nitrous system he wanted for Hanukkah. But, those neon lights on the runner are sick, brah.

Skipping right over our nation's birthday and all the patriotic hat horror it causes, we move to the lighter side of things. Before the game, Todd Kalas found his way into the booth with Dewayne Staats. 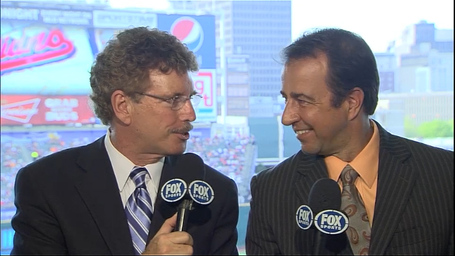 This looks like a poster for a new Romantic Comedy:

Meet Dewayne. He's a hard-working guy who's always wanted to be an announcer. Meet Todd. A social-butterfly born into the announcing elite. Can they work together and get through the game? Will they get it together and make a run for finals? Can they raise enough money to save the team from being relocated to a strip mall? Will they learn about life, love, and maybe--just maybe--respect?

They're just going to have to work together: Play-by-Play.

I'm sure y'all can come up with a better title.

The reason Brian Anderson was out of the booth for that segment was that his daughter called out "Play Ball" on the field before the game. BA felt he had to watch over her for this special occasion--and it's a good thing he did. Methinks the Philly Phanatic needs an talkin' to.

Same clip, but shorter (because, why not?):

If Barney the Dinosaur weren't scary enough. What was BA's reaction to this? 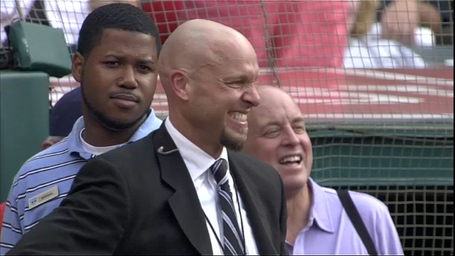 Yeah, that cringe is saying, "That's going to require some serious counseling in a few years." And the guy in the background is all like, "You mad, bro?"

It would all be OK for now, as BA's kids would make it up to the booth in the second inning. 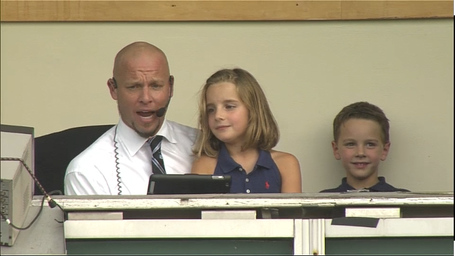 OK for them, but this cut away caused the broadcast to miss the first play of the inning: a B.J. Upton ground out to third. Eh, now that I think about it, I say it was a good decision by Sun Sports to spare us just one first-pitch ground out by Upton this year. We'll get to see plenty more.

In the top of the fifth, Luke Scott decided to break out of his 0-for-41 slump with a homer. Only person who didn't know it was a homer was Scott:

The upside of being so down on yourself, is the relief you feel when it all turns out OK. Relief might not be the right word for this next facial expression though: 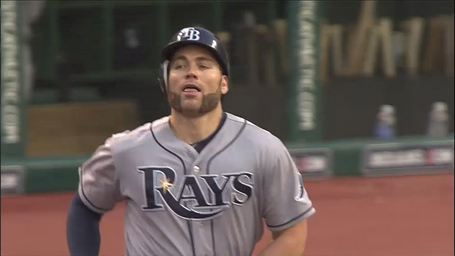 Everyone congratulated Luke on his homer. And not just in the dugout. 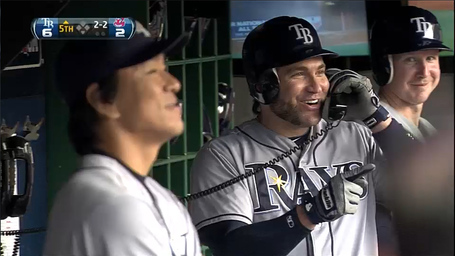 Luke's getting a nice call of congratulations from the bullpen. Elliot Johnson's like, "HMMM, I WONDER WHO'S ON THE TELEPHONE!" (Now say it in a Margret Thatcher voice.) Generally, you seen the dugout calling the 'pen, not the other way around. I wonder who's on the other end of the line: 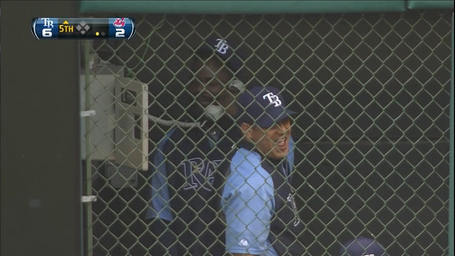 Ah ha! Fernando Rodney. If he keeps up his numbers through the second half, he can call whomever he wants--900 numbers, too. Not so fast, Matsui. You gotta earn it.

In the bottom of the fifth, the guys in the truck got BA all agitated (again). 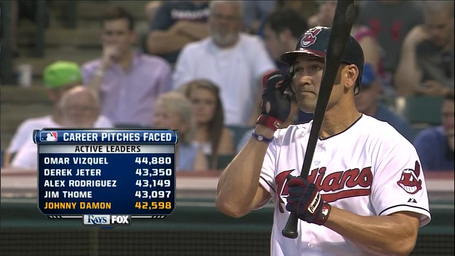 BA went on a bit of a rant about the plethora of Damon-stats last year, and he got right back into it:

BA: You guys, you gotta be kidding me. I'm having flashbacks over here.

DS: He's in great company there. Look at that.

BA: He is. Listen, every list that he's on. And I'm sure that there's another couple that are gonna be thrown back out there... Pitches seen.

BA: Is that next?

In bottom of the sixth, Snarfalicious caught "Joel Peralta getting his Magic Mike on in the bullpen." 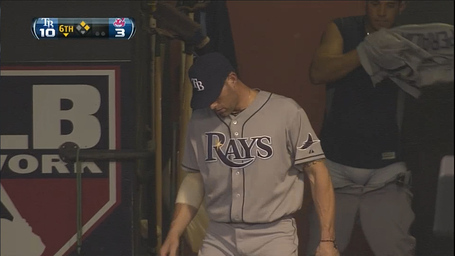 I suppose the bullpen is the place for us to see Peralta's junk balls.

Sun Sports really needs to get on that WGN-style broadcasting of targeting every attractive lady-fan in the stands to balance this out. Even at home games. Blue seats can be sexy, too.

We end the week with the beginning of the Rays big ninth inning comeback. After Will Rhymes blasted a solo home run off Indians closer Chris Perez, he pulled a (Major League 2) Pedro Cerrano as he crossed home:

You can see him smiling and staring in the direction of the dugout/on deck hitter Elliot Johnson, so you know this was on purpose. Let's not forget Ben Zobrist's grab from earlier in the season.

(H/T yet again to Snarfalicious. That's two tagged crotch-shots in a row. I'm not saying you're trashy, but you're mind is certainly filled with junk. )