Carlos Pena: A Change In Approach

Share All sharing options for: Carlos Pena: A Change In Approach

People love Carlos Pena. They love his home runs. They love his defense. They love his smile and his leadership in the club house. They love the way he asks Fernando Rodney where his invisible arrows are landing. What people don't love are the strikeouts and low batting average. While it would be nice if those numbers were better, he's still taking enough walks to currently grade out as an average to slightly-above-average first baseman. It's how he's drawing those walks that makes him a fascinating player to me.

I got bored watching the All-Star game last night, so I decided to poke around at some player pages on FanGraphs. I looked at Pena's last full season with the Rays (2010) and compared it to this current season. The numbers are remarkably similar.

Pretty similar, right? The biggest difference is the gap in slugging percentage. What really stuck out to me was that his walk percentage is the exact same; 14.9%. Yes, his strikeout percentage has risen from 27.1% to 29.9% but the league average rate has increased over a full percentage in that time while the average walk rate has decreased just .4%. Another thing you'll notice if you look at Pena's page long enough is he's swinging the bat a career low 42.5% of the time. You may have seen the new hitter pitch f/x profiles on Baseball Prospectus, if not I encourage you to check them out. Tons of sortable information there. I wanted to compare Pena's swing rate from the two years in question. The results are after the jump. 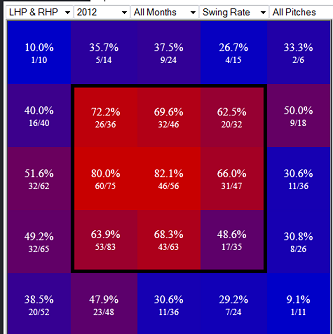 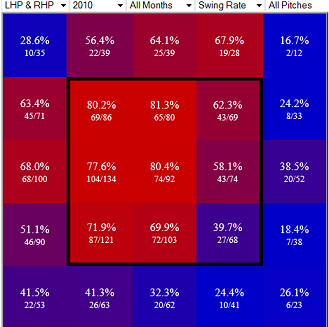 The percentages indicate how often he swings at pitches in that location. The first thing you notice is how much red is on the 2010 chart. The second thing is how blue the top of the 2012 chart is in comparison with 2010. He's virtually cut down his swings at balls above the strikezone by half which obviously contributes to the lower swing rate. As he ages and his skills erode he's seemingly becoming more selective. His ability to do that is the main reason he can still find full time employment.

As I mentioned before, those charts have all sorts of good information. I sorted the chart to look at his isolated slugging to see if where he was getting his power from had changed. Instead of flooding this post with more crudely cropped charts I'll link to the results: 2010 and 2012. In 2010 he derived a bulk of his power from pitches outside to low and outside and had virtually no power on anything up or inside. This season he's done very well with pitches up, with ISO's of .231, .273 and .333 in the upper left, middle and right quadrants of the zone. It's possible he's being pitched differently as well. In any case he's adapted.

By pure totals Pena looks like virtually the same player he was two years ago. A deeper look indicates he's anything but.