Both Tommy Rancel and Jonathan Mitchell have pointed out B.J. Upton's overly aggressive habits at the plate this season. Rancel pointed it out in late May and Mitchell revisited the situation in late June and found no change to Upton's habits at the plate. In the past, fans have jumped on Upton's case for being too passive at the plate and taking too many called strikes and that pendulum has now swung the other way as many are frustrated with him impatience at the plate.

In the second game of the double-header in Philadelphia, Upton earned a golden sombrero striking out four times in five plate appearances. That kicked off a run of him striking out in 24 of his final 64 plate appearances (59 at bats) which ended with an identical performance against the Indians in the final game of the first half and giving him a 38 percent strikeout rate during that stretch.

Thanks to the new hitter charts done by Dan Brooks and Harry Pavlidis of BrooksBaseball/BaseballProspectus, we can get a better look at where Upton is having issues this season. First, let's compare Upton's swing rates for his career to what he has done in 2012 (click to enlarge).

blue is good, red is bad, purple is average 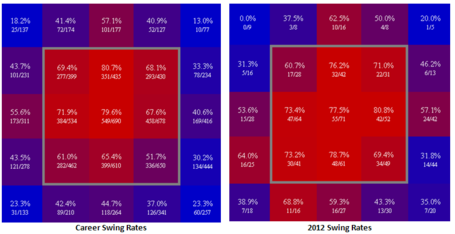 We already knew from Rancel and Mitchell's work that Upton was being more aggressive both within and without of the strike zone, but now we can see exactly where Upton is having issues. He has expanded his zone in nearly every direction while chasing more pitches out of zone, particularly in the lower portions of the zone where off-speed and breaking pitches tend to be located.

Now, let's take a side by side look at his contact rates for his career versus just this season (click to enlarge)

Throughout his career, Upton has been quite good at covering the inner half of the plate but struggles on breaking stuff that he will chase out of the zone and come up empty on more often than not. This season, Upton has maintained his ability to make contact with pitches in the middle of the plate, low and inside, and even in the lower middle part of the zone. A big trouble spot for him within the zone is one that historically been a strongsuit of his - middle in. His contact rate on pitches middle in has fallen off dramatically from 15 percent to 26 percent. Additionally, he is struggling even more with the pitches up and away in the strike zone this season compared to his overall career marks.

Lastly, let us compare his swing and whiff rate by pitch types this season to see which pitches and locations are giving him the most trouble. These views will show how Upton is handling the hard stuff (4FB, 2FB, cutters), the off-speed stuff (changeup, spiltters, forkballs) and breaking stuff (sliders, curveballs). (Click to enlarge):

Red is good, blue is bad, black is average 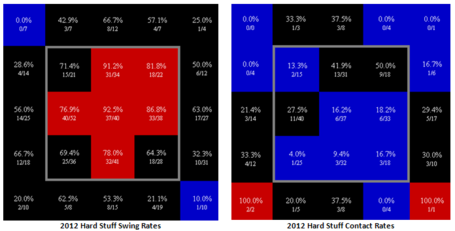 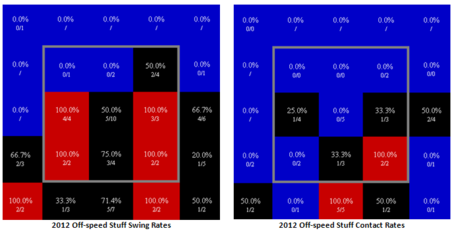 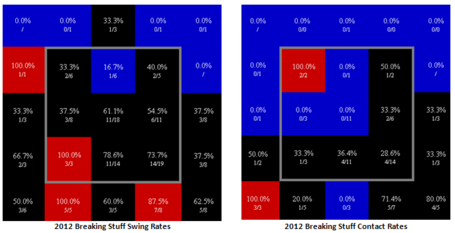 What all of this has led to is Upton getting away from his strength. Upton has a well-established hot spot in his zone: middle to middle in. Historically, he has crushed those pitches and done his best damage with that. These days, even that is not happening as pitchers are tempting him to expand his strike zone and so far, he has been incredibly accommodating to them. 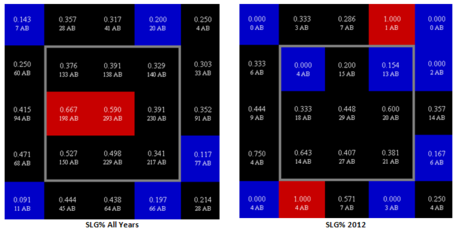 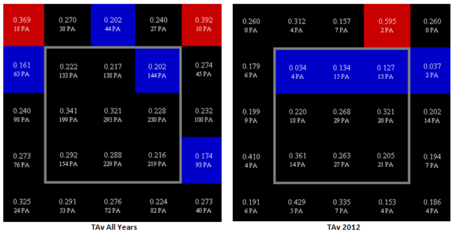 Perhaps Upton should ease off the gas just a bit with his new lead-handed style at the plate and get back to being more selective in what he attacks at the plate. Simply put, the current approach is not working and an improvement by him in the second half is crucial to any post-season thoughts the Rays may have.