As you've probably noticed by now, James Shields has been in a horrible skid. He's allowed 10 hits or more in his previous four starts, including a career high 14 hits against the Tigers in one game, and his overall season results are trending in the wrong direction. His 4.44 ERA is "meh" at best, and he's letting up homers at a pace eerily reminiscent of 2010. Was Complete Game James from last season a mere mirage? What pitcher are we going to see going forward: the stud or the screwball?

I wish I had a good answer to that last question, but the truth is, I don't. Pitching is incredibly difficult to analyze, and the more I do it, the more I realize that I know nothing. There are simply so many variables and so many moving pieces, it's very difficult to actually nail down exactly what's wrong when a pitcher is off their game. As Whelk highlighted this weekend, sometimes it's better for us to acknowledge that we know nothing rather than trying to do too much.

But even if we can't say exactly what's wrong with Shields, there are some interesting trends going on. Shields currently is displaying nearly identical season stats as he did back in 2010, oddly enough: his strikeout and walk rates are nearly identical year-to-year, and he's having trouble yet again with his BABIP and home run rate. The main reason Shields' ERA isn't as high as it was in 2010? His grounder rate is at a career high, thanks to an increased use of his changeup and two-seamer. And despite the Rays' porous defense this year, it's still easier to turn grounders into outs than it is line drives.

So what's been giving Shields problems so far? Let's explore a bit.

Shields thrived last year in part because he managed to turn his curveball into nearly as good a weapon as his changeup. Both pitches generated swinging strikes at a phenomenal rate (~35 percent) and his curveball was actually slightly more effective than his changeup against left-handed hitters. He had two true knockdown pitches in his arsenal, and he decreased his fastball use significantly in order to use them more often.

This season, Shields is still using his curveball and changeup more often, but his curveball isn't anything near what it was last season. In fact, he's seeing even worse results with his curveball than he did in 2010. The whiff rate for his curve is down to around 20 percent, and he hasn't even been able to get lefties to swing at it all that often.

I'm not entirely sure why Shields's curve has been so ineffective this season -- bonus points for any theories or observations about this -- but it's far from a dominant pitch at the moment. Shields is throwing the pitch less often as a result, and it means hitters effectively can sit on his changeup when in a two-strike count.

Yet this season, things have been reversed: Shields is turning every left-handed hitter into Adam Jones (.357 wOBA) and right-handed hitters into Jose Altuve (.336 wOBA). His fielding-independent results are nearly the same, as Shields has allowed the vast majority of his home runs to left-handed hitters (13 out of 16).

So why the sudden platoon split? Darned if I know, but it could be related to his curveball's effectiveness. Both his curveball and changeup should be most effective against opposite-handed hitters, so the fact that Shields isn't getting good results with his curveball makes him significantly less dangerous against lefties. Maybe it's allowing hitters to sit on his changeup more, as he's allowed 5 home runs to lefties off his changeup? Tough to say, but it's a possibility at least.

Back when Shields struggled through the entire 2010 season, the best answer I could come up with at the time was that his command was off. He didn't walk many hitters and it's not like he fell behind in counts all the time, but Shields definitely had a problem with leaving too many hittable pitches over the plate. His fastball is a weak pitch and can get hit hard if left over the plate or overexposed, and in general, Shields pounded the zone almost a bit too much.

Or at least, that's what I thought was the problem. It's entirely possible I constructed a narrative to fit the results and data I was seeing, and the true answer could have been something else. But if command truly was a problem for Shields back in 2010, could that be his problem right now as well?

It's certainly possible. Shields is throwing fewer pitches in the zone than ever before -- a mere 43 percent -- and his hits allowed in recent games have all come on fat pitches. Consider: 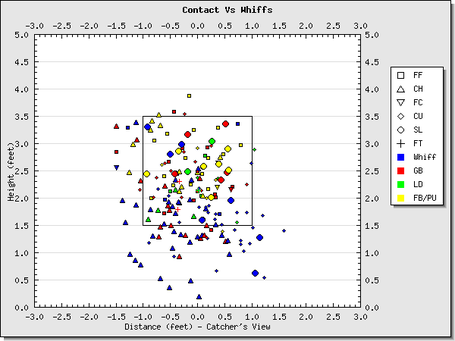 To be fair, though, if you were to look at the pitch locations on hits for other pitches, you'd probably see a similar trend -- pitches over the middle get clobbered. The real question is, how often is Shields throwing a "hittable" pitch, and is that percentage different than it was last year? That's not a question I can answer at the moment, although I'm sure those with better PITCHF/x skills than me could give it a shot.

So what's the final answer? Do we know why Shields is struggling of late? We can certainly make some educated guesses, but beyond that, it's difficult to tell. His overall results for this season still look phenomenal, and they suggest that Shields will regress giving enough time. But will that be soon enough? And does Shields need to change anything in order for that regression to kick in?