Heading into camp this year, Wade Davis was crystal clear on his thoughts about potentially moving to the bullpen. Simply put, he had no interest in it.

"I'm a starter," he said. "I don't see any reason for me to be in the bullpen. I understand they've got to do certain things, but we'll see. … I definitely want to be a starter and stay a starter forever. And that'll be my mentality."

The tone in that comment sounded a bit selfish at first but he also clarified it by saying:

"Right now everything I'm doing is to get ready to throw all year long and into the postseason — I want to throw 230 innings," he said. "I'm going to go out this spring and have a great spring. I have a whole different mentality and I'm physically better and stronger."

He did eventually lose the competition to Jeff Niemann, and even when Niemann went down with his injury, it was Alex Cobb and not Wade Davis that was asked to fill the spot in the rotation.

While Davis may have not been happy with the possibility of working in the bullpen in 2012, you would never know it by his results this season as the bullpen appears to suit The Bulldog very well.

Davis was a pro's pro when learning that he would indeed begin the season in the bullpen.

"I'm good; it'll be a good experience," Davis said. "It's not a demotion. We're still all going for the same thing, to get to the World Series as a team. Individualizing yourself and taking it personally would be stupid, and selfish. I still feel like I'm built for that routine — my body is strong, the way I pitch throughout the season....I still have tons to prove and tons to give back.""

Wade Davis was one of the brighter spots of the last weeks of the 2009 season as the Rays struggled to keep players healthy (sound familiar?) on their way to an 84 win season. Davis was called up once rosters expanded and in his first start, struck out nine Detroit Tigers hitters in 7 innings including six of the first seven hitters he faced in the game. Two starts later, he threw a complete game shutout against the Baltimore Orioles in which he struck out 10 batters. Oddly enough, that is the only time Davis has struck out at least 10 batters in a game in 64 career starts. The dominance that Davis displayed when he first came up gave way to a different type of pitcher in 2010 and 2011.

As a starter in 2010 and 2011, Davis did pace himself over the course of the season making 29 starts in each of those seasons, but the dominance that he flashed in 2009 was a thing of the past as his strikeout rate was 6.1 in 2009 and just 5.1 in 2011 leaving many to wonder where the dominance from 2009 went. In 2010, Davis missed three starts with a right shoulder strain and he missed two starts last season with a right forearm strain wrapped around the all-star break. A look at his velocity charts at FanGraphs make it easy to see exactly when those two events happened (click to enlarge): 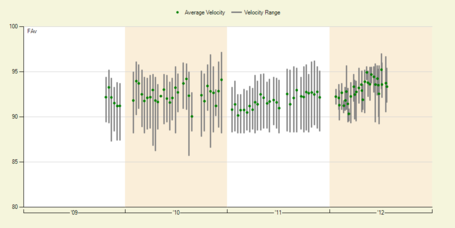 In each of the past two seasons, Davis had a FIP of at least 4.60 as he ended up pitching to a lot of contact while struggling with his walk rate and giving up a healthy dose of home runs. He also struggled to put batters away last season with the lack of an effective off-speed pitch. Davis had little trouble getting to two strikes with hitters but had much trouble getting strike three.

With those issues in mind, the move to the bullpen seemed to be the best move to allow Davis to rediscover his dominance and attack hitters while not worrying about conserving his velocity or changing speeds since he never took well to a change-up. The change has suited Davis well across the board.

The first three images show the velocity on Davis's pitches as well as the whiff rates and the rates at which each pitch is put into play. 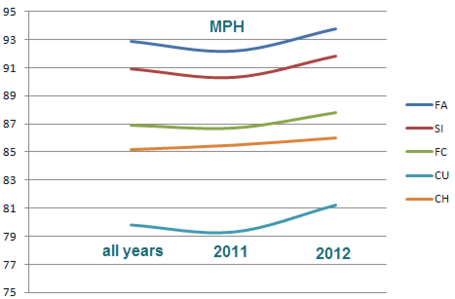 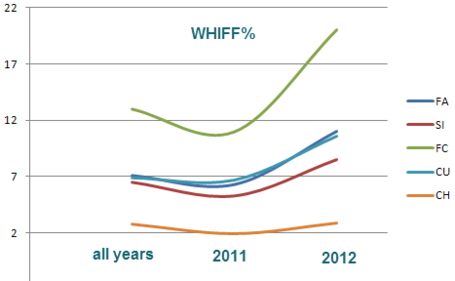 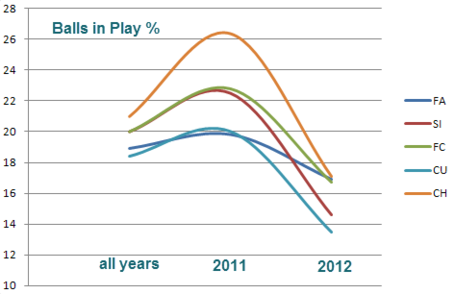 Davis is throwing harder out of the bullpen with his pitches than he did as a starter, which is typical of any pitcher making that transition as long as the move is not related to any kind of fatigue or injury. The most dramatic change in his results is how much tougher his slider/cutter is to put into play this year than in past seasons. Last season, Davis threw 320 sliders and generated just 34 whiffs with the pitch while in 2012, 54 sliders/cutters have already generated 11 whiffs.

The heat maps from BrooksBaseball/BaseballProspectus below show the different results, based on True Average Value (TAv) as to how Davis's stuff has played out this season compared to 2011. Results have been normalized for right-handed pitching; percentages above 100 are below average while results below 100 are better than average. Additionally, red zones are trouble spots for pitchers, blue spots are strong spots, and purple spots are neutral (click to enlarge). 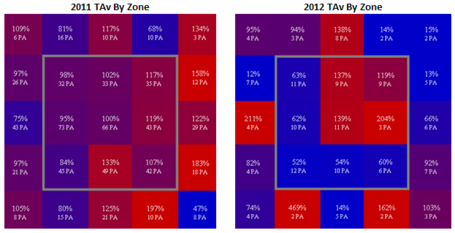 Davis is finding more success this season down in the zone and inside to righties and away to lefties. He still does have his trouble spots, but they are fewer of them so far this season than there were last season. It is amazing what happens when opponents are putting less balls in play.

Davis is being paid $1.5M this season and that salary escalates to $2.8M in 2013 and $4.8M in 2014 before higher priced team options kick in starting in 2015. At those controlled rates through 2014, he has value to the team either as a starter or as a reliever but with the results we are seeing so far, it is tough to envision Davis stepping away from this success as long as he remains with this club. Bullpen assets are cherished, but his contract would also be a very attractive piece on the open market if the team does decide to trade for offensive help and the team could ask Cesar Ramos to fill the spot and be the pitcher to do the heavy lifting when the starter is chased early in a game.

Given the results of last night's game after the bullpen article that I posted yesterday, I fully expect Wade Davis to go out and give up 6 runs in an inning of work tonight......