Through the first few innings of this game, I thought I was going to have to review another beer in lieu of a recap. Thankfully, the Rays' bats woke up so I didn't have to pass out.

Yes, they only scored three runs, but given the current state of the Rays offense, that ain't half bad. Offensive heroes included Sam Fuld, his first game back; Jeff Keppinger, a masher of lefties; and one Brooks Conrad, who, yes, is still on the team.

While it wasn't to the level of Kelly Shoppach's 2011 ALDS 'Shopshank Raydemption,' Conrad's contribution was instrumental to the Rays win tonight.

With two outs in the fifth inning, Conrad caught hold of a hung Wei Yin Chen slider and sent it flying to Zihuatanejo the left field stands for a two-run homer. Given his recent performance, it would have been nice to see Conrad contribute anything at the plate tonight, the fact that he produced enough runs for the Rays to win the game is just laginappe. Unlike Brooks from the Shawshank Redemption, who etched his name with a pocket knife (above); Conrad announced his presence with a might crack of thunder and the tears of the Orioles fans (below me). 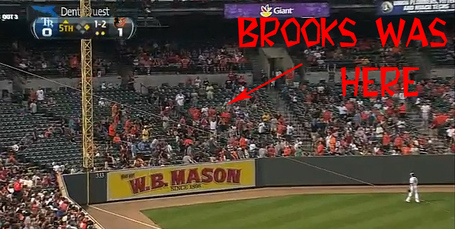 The Rays would score another run on a Jeff Keppinger bloop in the sixth, but it wouldn't matter as Jeremy Hellickson was on his game tonight... after the jump.

Hellboy threw six-and-one-third innings of precision baseball, allowing just three hits and walking none while striking out four Birdos. He generated ten swinging strikes; five coming on the changeup which is no surprise, but four on the curveball which threw me for a bit of a loop. Helly's been rather cutter-conscious this season, so the bender was a nice change of pace.

Unfortunately for Hellickson, one of his three hits against was an absolute piss-missile to left-center off the bat of Adam Jones. Thankfully, Hellickson was able to limit his baserunners tonight so that solo blast wasn't a three-run-round-tripper. Here's Helly's pitch chart for the evening (look at that spotted-curve; that's not a euphemism, I swear):

via www.brooksbaseball.net (AKA Brooks Was Here)

In other news, it was Super Sam Fuld's first night back on the field for the Rays and he went 1-for-3 with a walk and a run scored. His hit was a push bunt that made it past Chen in the seventh. He also stole a base for good measure.

The bullpen closed out Hellickson's evening with goose eggs. Jake McGee pitched two-thirds, and Joel Peralta and Fernendo Rodney each pitched an inning to finish off the game. Of all the pitchers, it was Rodney that struggled the most tonight. He took Nick Markakis comebacker off his pitching hand to lead off the inning. He's throw Markakis out at first, but then was a bit off as he walked J.J. Hardy, and Jim Thome. He worked both guys to 3-2 counts and found himself in another full count against Adam Jones, but K'd the young slugger on a change up then took care of Matt Wieters with another K to end the game. He had to work for it, but he got the job done.

Tomorrow, David Price takes on Miguel Gonzalez to see if the Rays can inch closer to ambiguity for the trade deadline. Game starts @ 7:05.