Last night, David Price picked up his league-leading 14th win against Baltimore scattering seven hits, walking none, striking out 10, and held the Orioles to a lone 1st inning run. This was just more of the same from the hard throwing left-hander who has been must-see television for Rays fans during a summer of struggling offensive outputs in most games. The dominance Price has displayed in 2012 is truly an extension of the skills he displayed last season despite the 12-13 record but he is taking his craft to another level and becoming a complete pitcher in command of his craft.

If you were to talk to fans about how Price dominates a game, they would like point to his mid to upper 90's velocity as his primary method of missing opponents' bats. That may have been the case earlier in his career, but as we saw last night, that is no longer an absolute truth.

When Price first came up in the 2008 season, his job was mainly to come in as a reliever and blow hitters away with power stuff. That season, he threw 331 pitches and all but three of them were either a fastball or a slider. Coming into the 2009 season, he was tasked with refining his off-speed pitch but during that season, 90 percent of his pitches were classified as a fastball or a slider. The 2010 season saw him mix in a two-seam fastball for the first time and go with a curveball as his primary breaking pitch and it was not until last season that his change-up became a tertiary pitch for him.

This season, Price has thrown just 61 percent two and four-seam fastballs and 75 percent if one includes his cut fastball usage in that group. His changeup has become his most preferred non-fastball pitch while his curveball is least used so far this season as he has thrown it just 212 times including the 14 he threw last night against the Orioles. Price's curveball may speak softly in terms of its frequency, but it has a big stick on the results graph.

Here are the whiff percentages of Price's pitches through his seasons as a starting pitcher as classified by BrooksBaseball: 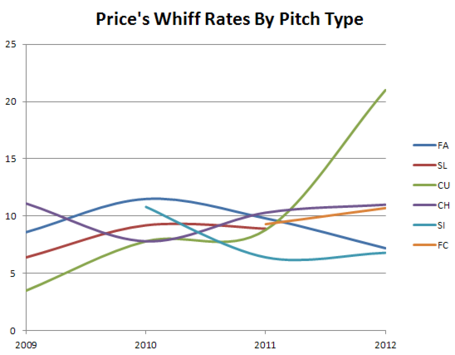 Price has thrown his curveball 212 times this season and has generated 45 whiffs with it which computes to a 21.2 percent whiff rate. Just two seasons ago, Price's primary and secondary methods for generating swings and misses were using his fastballs. He began a transition last season to lessen his dependency on his velocity and has completed that transition this season. His curveball has become a weapon for him this season that he is now comfortable throwing at any point in the count which keeps hitters guessing more than they had to in the past with Price.

Price primarily throws his curves to right-handed hitters where he attempts to either back foot the righties or start the pitch off the plate and bring it back into the zone. In fact, six of his ten strikeouts last night came on curveballs to right-handed hitters, four of which resulted in swinging strikeouts. Either way, opposing hitters have yet to hit a home run off the pitch and 70 percent of the curveballs that hitters do put in play off the pitch are groundballs.

2009 saw Price work through pitching 1.0 while 2010 began the process of converting to pitching 2.0, a conversion that is now looks very much finished. Simply put, Price is now the most talented and most complete starting pitcher on the Tampa Bay Rays staff and has been the stabilizing piece in an otherwise tumultuous season in Tampa Bay.