This Week in Sun Sports: I Will Always Love You Edition

Share All sharing options for: This Week in Sun Sports: I Will Always Love You Edition

Welcome back to This Week in Sun Sports, kids. As always, we'll be looking at the oddities of the Rays broadcasts from this past week. Anything from the announcing, to a crazy video segment, to the fans in the stands. If it's on Sun Sports, we see it. Because-- like Judge Reinhold in Fast Times--we're always watching.

This week covers Tuesday, June 26th - Sunday, July 1st. If you missed last week's, you can find it here.

Why does the week always start with GIFs? As seems to be the trend, we're going to flash forward in deference to the GFFP and loop back around after the jump.

Unlike the Rays' play in Kansas City, the weather was HOT. In the bottom of the eighth, with the temperature over 100 degrees, Todd Kalas had to find a way to stay cool on the field: 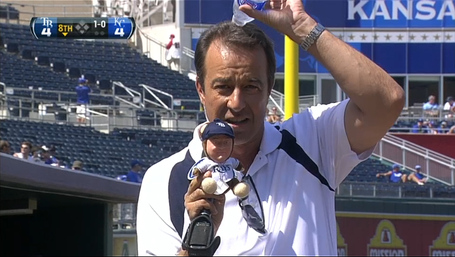 TK looks down right trepidations in the milliseconds before that icy-cold Aquafina hits his head. Don't worry, TK, you know you'll like it. 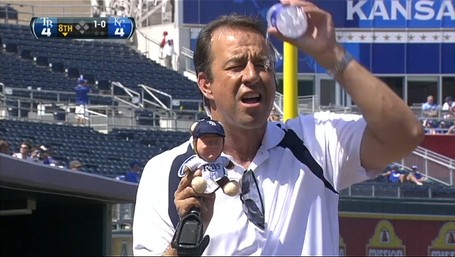 "OH MY GOD! IT'S LIKE THE TEARS OF TANTALUS CASCADING DOWN MY FACE. I CAN'T TELL WHERE THE WATER ENDS AND MY FACE BEGINS!"

(It can get creepier than that... after the jump.) 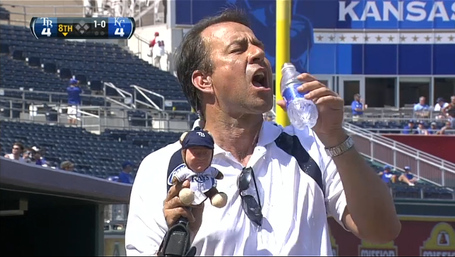 Yup, creepier. That man is insatiable. The ZimBear does not approve. This looks like a poster for a WW2 movie or a Whitney Houston biopic. Because the water bottle would be a microphone. What were you thinking? 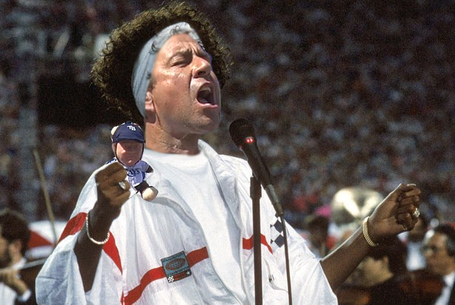 Just before TK went all Flashdance on everyone, he was kind enough to give some to the ZimBear:

The best part of this clip might have been Brian Anderson uttering, "JESU--" before he got a hold of himself when TK gave ZimBear a drink. Here's the whole clip in uncut glory:

Even though we're moving back in time, Sean Rodriguez is still flabbergasted.

After striking out looking in the second inning, Sean Rodriguez have a few choice words (h/t Hipster Doofus):

It's time for this week's edition of "What Could He Possibly Be Saying?" I think it has something to do with the recent Supreme Court rulings. Something like "Goalie Writ!" Clearly he was referring to the need to file a Writ of Certiorari on the previous call. Like a goalie, the Supremes must be able to defend this horrible injustice. That must be it.

In the bottom of the third, we got a nice shot of Umpire Bob Davidson's lid: 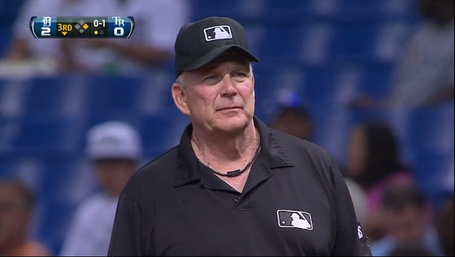 Crease Lightning! Didn't anyone ever tell that man how to break in a ball cap? It's like he's making sure the snow falls off. Did he sit on it? Whatever his intention, it is clearly a balk.

Commenter Snarfalicious might have forgotten to tag his comment #TWSS, but that doesn't take away from his keen ears picking up some chatter from Dewayne Staats and Brian Anderson. In the top of the sixth inning, BA said this gem about Todd Kalas:

We caught it on tape. He loves the wet head.

I Photoshop'd an image here, but about halfway through I deemed it NSFL (Not Safe for Life). For some reason, I finished it anyway. You can use your imagination.

Of course BA was referring to the water incident from the day before:

DS: But, his hair looked good.

BA: Well, you know how he does it? We saw it yesterday. We caught it on tape. He loves the wet head.

BA: And that's how he gets the hair to lie perfect.

This time, the ZimBear approves.

In the top of the seventh, James Shields had to make a quick turnaround:

C'mon, James. There's two outs, you know you can't go anywhere. Crash Davis taught me that strikeouts are fascist and, therefore, must be avoided.

How does that make you feel, James? 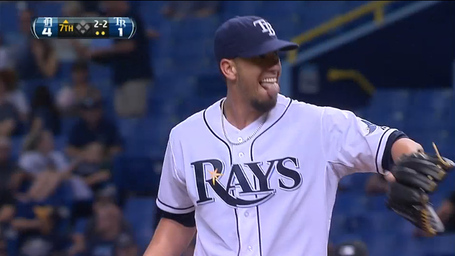 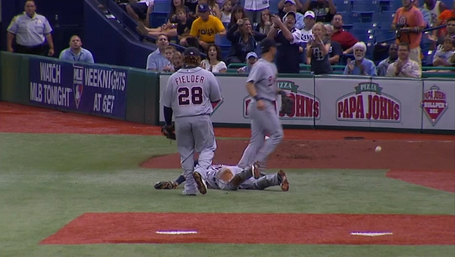 In the third inning, nomoredevil caught Dewayne Staats with a little nugget of gold. After Prince Fielder and Co. drifted into foul territory and missed a tall pop-up, De-Wayne explained why: