Last week, we learned that Johnson was one of the few guys that was exceeding offensive expectations in a season where most of the team is under-performing their projections. A current peak at the wOBA leaderboard at Fangraphs shows Johnson with a higher weighted on base average than the likes of Dustin Pedroia, Justin Morneau, Carlos Pena, Kelly Johnson, and even Adrian Gonzalez. Johnson's .322 wOBA is the second-highest on the active 25-man roster at this point, which is either amazing or depressing depending on your outlook.

In 2008, Jason Bartlett was dubbed the team's most valuable player by the local media despite inferior numbers across the board to his more talented teammates that season. Johnson does not have the inferior numbers this season, but it is tough to argue against him being one of the more valuable cogs on this team during this bad stretch as he has been able to both remain healthy and be productive in a lineup that struggles to scratch across even three runs most nights.

Johnson's story is not foreign to most who follow the Rays. He was an undrafted free agent out of Thatcher High School in Arizona where he and his brother Leon have been the only two players to play professional baseball at any level. Johnson was waived in April of 2010 and went unclaimed allowing the Rays to assign him to Durham where he would continue his enterprise at Durham on his way to 1,701 plate appearances in which he hit .261/.325/.416. All that time, he just held out for a chance with the big league club.

In 2011, he made the team after a big Grapefruit League season and hung around as a role player all season getting spot starts but hitting just .219/.257/.338 and was caught stealing seven times in 13 attempts. This season, it would shock just about everyone that he has a higher batting average than Erick Aybar, a higher on base percentage than Jimmy Rollins, and a higher slugging percentage than Jose Reyes and Alexei Ramirez. He also has more steals than Alcides Escobar and Cliff Pennington.

We are all familiar with the Rays and their love of the misfit toys that the rest of the league do not appreciate, but even they tried to dump Johnson two seasons ago and only kept him because nobody else had any interest in him. Simply put, his production in 2012, even in a small sample size, is impressive. It may have never happened if not for the injury to Evan Longoria coupled with Sean Rodriguez suddenly losing his calling card ability of hitting left-handed pitching. At a time when the team has struggled offensively, Joe Maddon has given the hot hand as much playing time as he can handle.

Johnson has made adjustments this season, but not in the direction one would expect. Johnson is seeing fewer pitches in the strikezone this season from pitchers, but is swinging more often at them and making more contact on those swings as well. Johnson's aggressiveness is also carrying over to pitches out of the strikezone and he is making better contact on those pitches this season than he did last season as well.

Johnson's total of 408 career plate appearances does not allow us to make any definitive calls on his true talent level, but we can look at running trends in his career. First, let's examine his walk rate, strikeout rate, and Isolated Power rates: 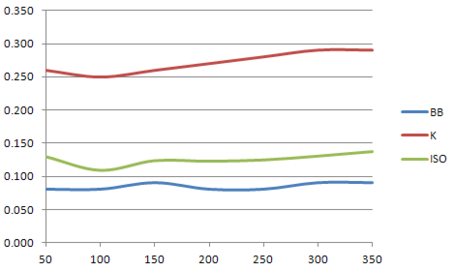 Johnson has put a nice dent in his strikeout rate over the last 100-150 plate appearances compared to where he has been in his career while maintaining his walk rate and Isolated Power rates. His triple-slash line shows less stability: 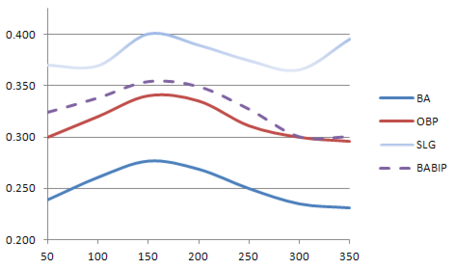 From an offensive perspective, Johnson has earned the right to claim as many plate appearances against right-handed pitching as is made available by Maddon but it would be helpful for his overall numbers if his playing time against lefties was reduced once the roster resumes its full status. The defensive issue with Johnson remains uncertain as the in-season metrics are not kind to him but with Rodriguez struggling as badly as he is and Reid Brignac seemingly under house arrest at Durham, Johnson is the best overall option the Rays have on the roster. The team should be thankful nobody claimed the organizational soldier when they had the chance two seasons ago and that Johnson has worked hard to shake the Quad-A label that nearly all players with 1700 plate appearances in Triple-A are adorned with at this point in their careers.