Share All sharing options for: Rays Score Not 0 Runs, Win 7-4 Against Yankees

Today's game begins and ends with Sean Rodriguez -- in a good way. Roddy, who became a topic of lament in today's feature about Elliot Johnson, swapped roles with Alex Rodriguez (0 for 4 with 2 strikeouts) and clobbered the Yankees pitching. He finished the night 3 for 4 with a homer, a double, a single and a stolen base.

R.J. Anderson noticed this dandy: It appears Sean Rodriguez has opened his stance a little. Jason Collette took the time to confirm the change: 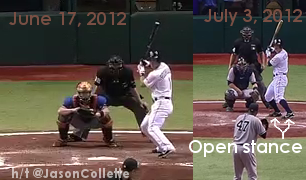 Players typically move to an open stance when they are having trouble seeing pitches from the same hand or trouble incorporating the the hips into their swing. And Rodriguez certainly struggles against righties, hitting only a 66 wRC+ against them on his career, and he is basically a poster child for not using his hips enough.

In the post game interview, with a twinkle in his eye, Rodriguez mentioned he had been working on some clandestine changes with hitting coach Derek Shelton. I'm thinking this is the change, so hopefully we have not spoiled the secret...

Is Roddy fixed? Oh brother -- it's like sixteen months too early to even consider that.

Other notes from the game: 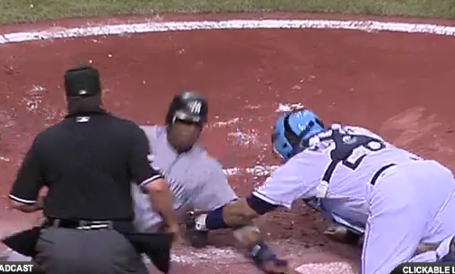