Share All sharing options for: This Week in Sun Sports: Leftovers Edition

Welcome back to This Week in Sun Sports, kids. As always, we'll be looking at the oddities of the Rays broadcasts from this past week. Anything from the announcing, to a crazy video segment, to the fans in the stands. If it's on Sun Sports, we see it. Because -- like a virgin checking out Dr. Horrible with the musical commentary -- we're always watching.

This week covers Friday, July 20th- Saturday, July 21st. If you missed last week's, you can find it here.

What? Just two days? Yes, but two days chocked full of TWSS. We had so much fun last week that we had to split it up. This week we get to have some leftovers and since we're a bit behind we have some ketchup to do. (I know, right?)

In the top of the fourth, Dewayne and BA caught sight of something in the left field stands. High atop the field in their lofty broadcast booth, the boys felt safe from danger, but on the ground, Todd Kalas, man of the people, was a little too close for comfort.

BA: I would proceed cautiously

BA: Maybe we could slide him a shiv... and he'd be more confident. 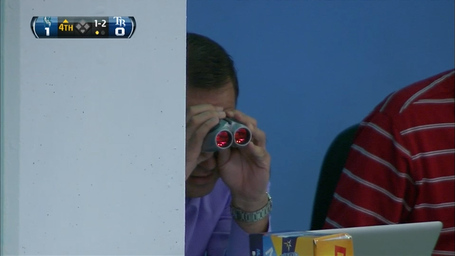 Todd Kalas is a man who's seen it all: He's crashed girl's tea parties, pushed a woman into the rays tank, and had some guests in his hotel room. What could he possibly be afraid of?

Find out after the jump...

Well, it was this guy:

I wonder what this guy could possibly want? If you're not great with the lip reading, he says: "¡¡¡I just wanna talk to Todd Kalas!!!" And yes, he uses three exclamation points. He also uses an upside-down one like in Spanish, even though he's speaking English. It's quite impressive.

What's TK's reaction to this?

I believe this is the "not with a ten-foot pole" face.

After a Hideki Matsui strikeout to end the twelfth inning, BA had had just about enough. In our first ever audio segment, he speaks with the voice of the people:

If you're at work or don't want to play the video, he says "Whatever." Yeah, you had to be there.

In the top of the thirteenth, Sandy Kazmir caught a glimpse of this Big Man from LA land:

Notice how he realizes he's on camera at the end and gets embarrassed. He covers his eyes with his hand. It's like the most instinctual/childlike gesture: "If I can't see you, you're not there." Sir, I know you wish we'd forget what we just saw. Well, we do, too.

In the bottom of the inning, this kid looked like he was having one helluva birthday:

If this isn't the perfect snapshot of a Rays fan, I don't know what is.

This also reminds me of myself at that age: all alone, all by myself getting one hell of a forearm workout.

In the top of the first, I was surprised when Corey Hart came to bat for the Mariners. 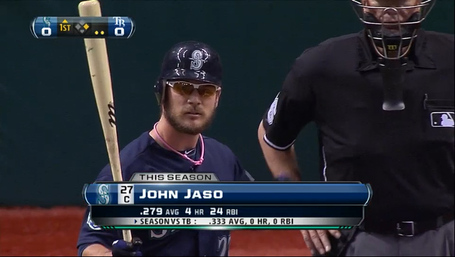 I would have pegged the Mariners for sellers.

In the bottom of the fifth, two "Law School Students" plugged some beer: 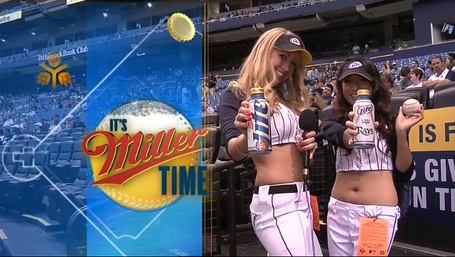 I'm assuming these girls were the rejects for the Fox Sports Florida girls. They had to have come to some arrangement with the guys in the truck because they got lines:

I don't know what those orange tags are, but I'm going to assume they're some kind of Surgeon General's warning.

In the bottom of the seventh, FreeZo caught Tom "Dave" Foley being a bit overzealous in tracking an overthrow behind third base:

This audio accompanies this clip well.

I showed you this gif of Ben Zobrist's sliding face last week, but I completely forgot to post this next one from the same segment:

This is the face Zobrist makes when he's trying to exorcise the demons from Linda Blair.