The curse of the Tampa Bay Designated Hitter role has been a long and storied one. To date, just two men have managed to have an OPS of at least .800 as the Rays' primary DH (min 250 PA) in a single season - Jose Canseco and Cliff Floyd. Canseco did it in consecutive years in 1999 and 2000 while Floyd managed the feat in 2008. Since then, it has not been pretty as no DH has been able to manage an OPS of at least .750 since Floyd's departure.

Provided by Baseball-Reference.com: View Play Index Tool Used
Generated 7/5/2012.
If we were to take Luke Scott's current OPS, he would slot in between Willy Aybar and Greg Vaughn. The .913 OPS in April gave way to a .659 OPS in May and an unfathomable .080 OPS since June 1st.
What goes down must come up, but what has led Scott to fall into this abyss?

In the bottom of the 1st inning on June 1st, Scott singled off Wei-Yin Chen as part of a five-run inning and drove in both B.J. Upton and Matt Joyce. Those were his 35th and 36th runs driven on the season, which gave him the team lead on that day. Despite going 0 for his last 36 since that plate appearance, Scott still owns a share of the team RBI lead with Carlos Pena at 36 which is both sad and funny.

That one single stands out in a sea of red outs on his spray chart (courtesy of TexasLeaguers.com)

He has had 38 plate appearances in this slump that have involved one hit, one walk, one reached on error, and 35 outs generated. 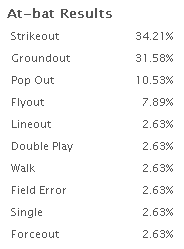 Scott has been grounding out nearly as much as he has been striking out in this run, with a large portion of his groundouts coming to the right side of the infield. The larger problem with those results is that Scott is mainly being pitched on the outer half of the plate and yet we see just one ball hit to the opposite field. The first graph shows the pitches Scott is swinging at while the second shows the ones he is taking:

This looks like a hitter who is not seeing the ball very well these days as he is chasing pitches well out of the zone while taking a lot of fastballs for strikes over the heart of the plate. In fact, he has seen 43 four-seam fastballs during his slump, has swung at 51 percent of them, has come up empty on 19 percent of them, and has put just 12 percent in play. Pitchers have thrown him mostly fastballs and sliders during this slump as he has seen 133 pitches in that time frame and only 33 of them have been changeups or curveballs.

Now, let's look at these same images from the month of April when Scott was one of the tougher outs on the team and was the DH everyone had hoped for when the Rays signed him this off-season: 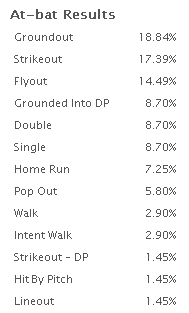 The phrase night and day is not even strong enough to describe the differences between the first set and second set of images with Scott. In April, he used all parts of the field, ,had a more disciplined strike zone, and teams were trying to get him out with off-speed stuff rather than the hard stuff. These days, pitchers are not hesitating to throw hard stuff in or even out of the zone as Scott is having trouble discerning balls from strikes. The fact that pitchers are throwing so much hard stuff now compared to what they did in April also hints at a potential problem with his current bat speed.

The injuries the Rays have suffered in 2012 are a big part of the 43-39 start to the season, but the disappointing performance from the two big offensive free agent acquisitions has also been a factor. Pena is at least hitting the home runs he was brought into hit and has an OPS+ of 103 while showing recent signs of getting on a hot streak. Scott, meanwhile, is the primary reason why the Rays have the second worst production from the DH role in the American League.

Provided by Baseball-Reference.com: View Original Table
Generated 7/5/2012.
Scott is just eleven hitless at bats away from setting the new all-time record for a hitless at bat streak besting Bill Bergen's 0-46 run in 1909 as a member of the Brooklyn Dodgers. For Scott's sake, let's hope he gets a hit here soon because that is not an honor anyone wants in the record book.