UPDATE: Wahoo's on First and Beyond the Box Score's writer Lewie Pollis took some time to chat Rays and Indians matters with Bradley Woodrum. The transcript is below the jump. 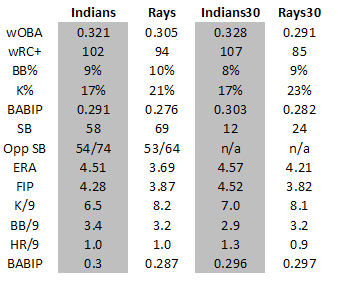 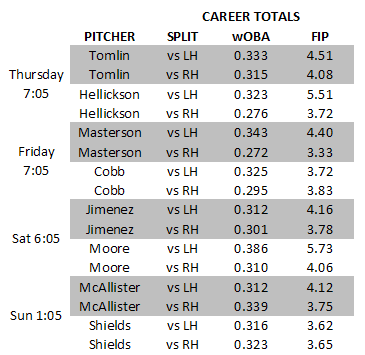 What is happening with the Indians rotation? Masterson, Tomlin, Jimenez -- there seems to be nothing but cold pitching in Cleveland. Is that about right?

Not at all. Tomlin has struggled lately (he doesn't get strikeouts or groundballs so even when he's on he's an inherently inconsistent pitcher) and Derek Lowe has suffered some severe regression after his great start, but the rest of the rotation is in great shape. Masterson got off to a slow start, but in his last six outings he's looked as good as ever (1.93 ERA with 36 strikeouts and only nine walks), and Jimenez is starting to come around too. Plus letting Zach McAllister usurp Jeanmar Gomez' spot in the rotation has paid huge dividends so far.

What's the secret to getting Shin-Soo Choo and Asdrubal Cabrera out? Should the Rays just plunk them and call it a day?

You're onto something there with Choo. You might recall that a Jonathan Sanchez beanball broke his hand last year, and in April it seemed like someone was throwing at his head at least three times a week. It got to the point where he admitted that the brushback pitches were throwing off his game. It hasn't seemed to have been an issue lately and I am in no way advocating roughing him up, but if you get him uncomfortable you can throw him off his game. (As an aside, it would be a lot easier to believe a pitcher when he denies beaning someone intentionally if he showed some remorse. I understand the need to be macho, but wouldn't you feel bad if you hit someone with a hard object going 90 mph?)

The key for Cabrera isn't to make him uncomfortable—it's to get him out before he gets comfortable. He's been much more selective at the plate this year (that's what's taken his game to new heights), but it still seems like his impatience gets the better of him at least once a game. Tease him with a deceptive breaking ball early in the count and you'll get a weak dribbler or a lazy fly. Fall behind in the count and give him something to hit and you'll regret it.

It's great having his glove at first base, especially since he's playing behind the Tribe's groundball-heavy pitching staff. He's just looked anemic at the plate this year, though. Anyone who's seen him play this year knows that the below-replacement-level rankings of him are inaccurate—the defensive metrics just can't capture all the good that his glove does—and thus he's somewhat underrated by the rest of league. But if you credit him for that and adjust for some BABIP variation, we're talking about a basically replacement-level guy who's playing a premium offensive position every day for a contending team. And that's a problem no matter how good his glove is.

Funny that you mention LaPorta, because I can't for the life of me figure out why he hasn't gotten a real shot to replace Kotchman yet. Right now he's hitting .312/.402/.590 in Triple-A; even after you adjust for the Quad-A effect he still projects as one of Cleveland's best hitters right now. Plus he's right-handed, which would make him a helpful addition to our lefty-heavy lineup. He got a call-up about a month ago and played three games before literally sitting on the bench for a week without appearing in a single game, so maybe that means Manny Acta just refused to use him.

If the Indians aren't going to give him a real shot now that he's tearing the cover off the ball and would fit in at a clear area of need, what's the point of even keeping him around? I'm scared that they might end up giving up something of value to trade for another first baseman who's worse than LaPorta in the next few weeks.

Is Carlos Santana going to turn it on soon? Is it possible he can wait until the after this series?

Brian Heise wrote a fantastic in-depth analysis on what's ailing Santana that I would highly recommend reading. The quick version is that he's a slow starter (we saw something similar last year too) who's been hampered further by injuries and a lack of protection in the lineup. He just got a few days off to clear his head and rest his body, so hopefully the break and the return of Travis Hafner will help him get back into his groove.

And what is your prediction for the series?

Call me a homer, but with the Indians on a roll and the Rays sputtering I'll say Cleveland takes three of four. I never bet against Justin Masterson and I'm pretty high on Zach McAllister right now, so we'll take Games 2 and 4 and we'll split 1 and 3.

And, lastly, I'm interested to hear your prediction for the Rays -- do you think they can reach the playoffs?.

I had the Rays winning one of the wild card spots before the season, and now that we're at the halfway point I don't see any reason to change that. I know they're behind the Orioles now, but better to be behind them and ahead of Boston and Toronto than the other way around.