Share All sharing options for: Jeremy Hellickson And The (Absent) Backdoor Curve

So far this year, and over the entirety of his still-young career, Jeremy Hellickson has struggled to get out left handed batters. If Hellickson only ever needed to face same handed hitting, he'd be well into that dominant career he hinted at in his 2010 call-up. Alas, he's faced a lefty 55% of the time, and posted a 5.52 xFIP while doing so.

Now, a large platoon split is somewhat unexpected for a pitcher who's best pitch is his changeup, and who also features a curveball (often platoon-neutral), but Hellickson, with his Madduxian feel for pitching, is a master of the unexpected. I know I've talked before about how Helly's curve loses almost all it's effectiveness against lefties, but I now have a theory as to why. Hellickson either doesn't attempt to or can't throw his curve backdoor to left handed batters.

First, some description. A "backdoor" pitch is an outside pitch whose spin deflection (movement) takes it back toward the plate. Price throws a backdoor cutter to right handed batters all the time now, and Shields often works his changeup backdoor against righties and his curve backdoor against lefties, both to great effect. I asked Toby David on twitter where a pitcher is aiming with a backdoor curve, and he said, "He would throw it to a LHB starting off the plate away trying to catch the outer 1/3 of the plate. A good one will cause the hitter to give up on the pitch because it looks outside."

Here is a visual representation of all curveballs thrown by right handed pitchers to left handed batters this year, that were within the vertical limits of a standard observed strikezone. I excluded pitches above and below the zone because when a pitcher throws a high curve, trying to drop it in for a strike, or a low curve, going for a swing and miss, he's attempting something fundamentally different. In doing so I've eliminated 5,234 pitches, or 47% of the sample size. Were I attempting rigorous mathematical analysis, I would frown upon discarding so many data points, but I'm just making a picture, and narrowing the view eliminates a decent amount of rather misleading visual noise. 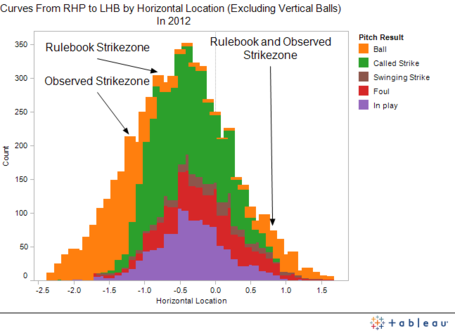 As you can see, pitchers really are aiming for that outer third of the plate. When they hit their spot, the result is most often a called strike, with batters rarely swinging (and rarely whiffing when they do swing). There's even a range between the rulebook strikezone and the actual strikezone called for left handed batters, where right handed pitchers who can backdoor their curve will get "extralegal" called strikes -- it's one situation where the game is rigged in favor of righty pitchers.

But Hellickson hasn't been able to take advantage. Here is the location of his curveballs (a few in the dirt are not shown) thrown to left handed batters. 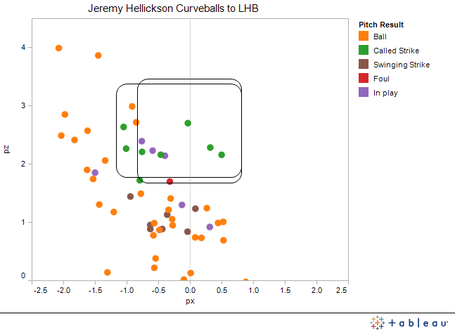 Clearly Helly works more down in the zone than the average curve-throwing right handed pitcher. While 53% of the pitches in the larger sample were what I considered "possible backdoor attempts," Hellickson has only thrown his curve within the vertical confines of the strikezone 33% of the time this season. Also, while RHP at large throw their backdoor curve most often on the outer third of the plate, Hellickson has thrown his off the plate for a ball just as often as he's gotten it over. And if he's missing at around the -1.5 ft. mark, I don't think he's successfully setting up future pitches, either. We can see from the graph that the chances of an umpire calling that pitch are miniscule, and Hellickson's curve averages over 5 inches of horizontal movement, so I doubt that it ever looked threatening to the batter.

Of course, we're dealing with small sample sizes here, but I think the first order of business for Hickey and Hellickson is to go ahead and up that sample size. Don't be shy, pound the outside edge of the plate. It's not like his curve has gotten hit when he leaves it up. Mostly, batters just watch it go by, and none of the left handed balls in play this year off the curve have been extra-base hits. Maybe he's right to shy away from the backdoor curve, and to keep it on the outer edge when he does throw one, but right now, Hellickson's process against left handed batters isn't working, and I think he has nothing to lose by being more aggressive.