This Week in Sun Sports: Double Down Edition

Share All sharing options for: This Week in Sun Sports: Double Down Edition

Welcome back to This Week in Sun Sports, kids. As always, we'll be looking at the oddities of the Rays broadcasts from this past week. Anything from the announcing, to a crazy video segment, to the fans in the stands. If it's on Sun Sports, we see it. Because -- like Ben Stiller herpderping some Aliens -- we're always watching.

This week covers Tuesday, August 7th - Sunday, August 12th. If you missed last week's, you can find it here.

I don't know if you missed it with all the winning, but there was some pretty good #TWSS this week.

Do you remember where you were when Evan Longoria triumphantly returned from the DL? I was eating a hearty KFC Famous Bowl -- wait, no, that was 2008. I was devouring a delicious Double Down -- no, that was 2011. Ah, yes, this year I was in the midst of a massive coronary when Longo rose, yet again, from the grave. Thankfully, Buc Wild was watching the Rays broadcast with eagle eyes ears when he heard Brian Anderson describe Moises Sierra's throw to second after a Longoria sac fly in the third inning:

BA: This is a zip line right in to the infield with some hair on it.

I can only assume he meant this: 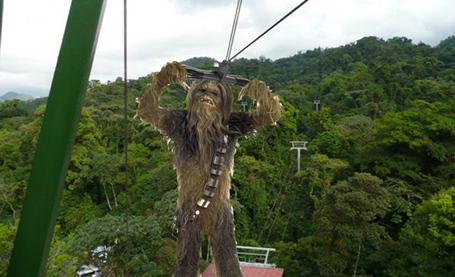 Joe Maddon is dumbfounded; Matt Moore loses himself in the music, the moment, you own it; and a blond gets awkward around Todd Kalas... after the jump.

With Longo back, the broadcast crew was finally able to throw out these fine clips in the second inning (GFFP'd):

If you've ever read anything on this site before, you're aware of the theory that Joe Maddon is, in fact, a robot. Not that I ascribe to this theory, but this might be what a robot looks like when its circuits are fried (like a delicious Double Down): 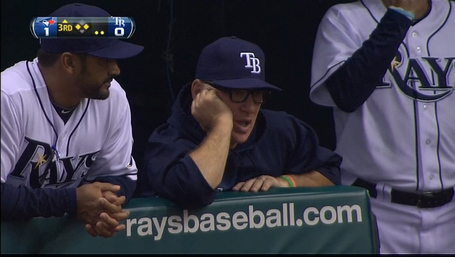 The camera's caught Maddon making this face after a Yunel Escobar single in the third inning. And just in case you're thinking that I conveniently froze the frame when Maddon was opening his mouth, here's a full five seconds of .gif for you:

We've all made this expression before, but generally there is either an adult beverage or an illicit substance involved. "Dude, like, woah. A hit. Davey, get me a Double Down, some lemon ice, and some Oreos."

In the sixth inning, BA and the crew decided to wish Dewayne Staats a happy birthday. They rolled out some vintage De-Wayne footage: 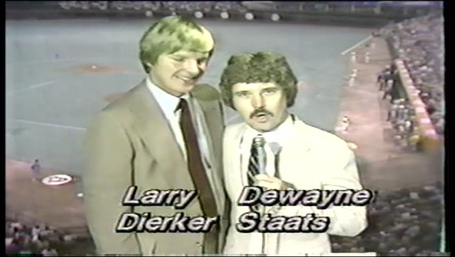 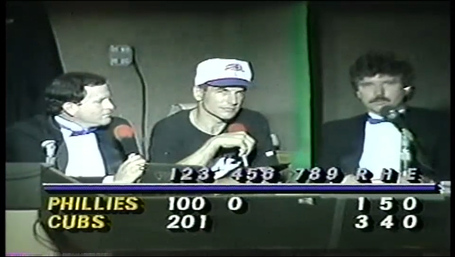 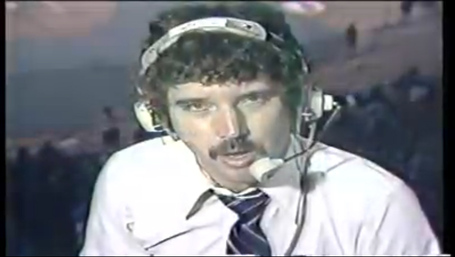 This is clearly the best one. Might be where Joe Maddon learned that face from. "I learned it from YOU Dewayne!"

That fan looks defeated. He clearly wasn't used to seeing that long, hard, black wood flying at his face. Couldn't even get his hands around it before it popped off.

In the top of the sixth, things got a bit hairy in the booth (h/t Hipster Doofus): 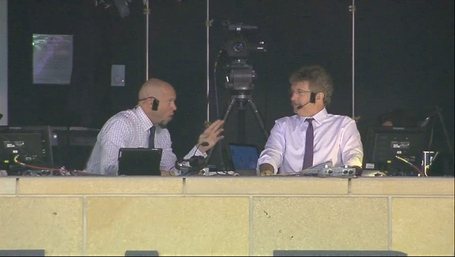 I feel like more of a man tonight than I have in a long, long time. I mean, very manly tonight.

In the bottom of the second, Todd Kalas began a segment about Joe Maddon using Ben Zobrist at short stop. As he began, this blond usher got all caught up in his dulcet tones:

Right as she passes him, she looks at the camera and realizes she's walked into a world of awkward. Notice how she begins to push off the wall, thinking, "Dammit, Stacy! Not again! I should get out of here," but then leans back, transfixed. Her eyes focus on the legend that is Todd Kalas and his truth-spitting microphone. "Where's the cord?" wonders Stacy. "Oh my god, there is no cord. IT'S WIRELESS!" Then she gives a small final shudder against the cool wall. The camera never came back to Todd and "Stacy," so I don't know if they went their separate ways, or TK took care of business. But, you know what they say about those Twins: they play in a Target rich environment.

Proof that she knows what she's getting into: 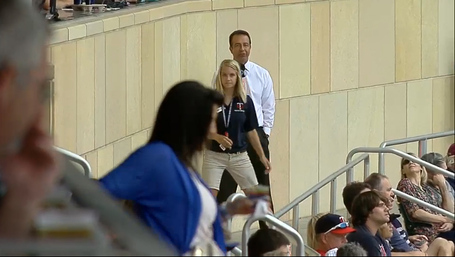 In the top of the fourth, Sam Fuld was buggin' out: 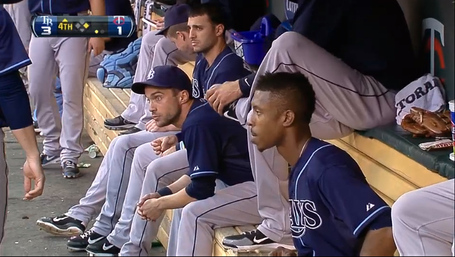 He actually runs the gamut of faces in about 1.8 seconds:

Before the bottom of the ninth, the camera caught up with Matt Moore and Alex Cobb getting into the music between innings:

It's a little tough to see what he's lip-syncing, and Joe Maddon making a mad dash for the Famous Bowl is distracting, so I'll just tell you: It's that Eminem song from 8 Mile. Too bad they're not on the hill. They look pretty pumped.

I forgot what inning this was in (often happens on Sundays), but nomoredevil overheard BA talking about a sticky situation:

BA: When I came into the booth this morning, you noticed, I was chewing gum. 14 hours. I put that gum in my mouth last night at 9:45.

BA: Yeah. And it did its job. It stayed the course. 14 straight hours with a piece of gum and that's fact. None of that was embellished and no, it did not go on the night stand.

DS: That could be a broadcast crew record right there.