Losses are always tough but losing a game by a single run especially when your team had a runner in scoring position in 6 of the 9 innings. Losing a game where the opposition cut two of your team's runners down at the plate including one to end the game. Losing a game while chasing a division championship and trying to keep pace in the wild card race... For Rays fans, the first pitch of Saturday afternoons 1:07 game can't come soon enough.

In his previous two starts this season Brandon Morrow had struggled against the Rays posting an 0-2 record with an ERA of 9.82 (12ER in 11IP) with a batting average against of .289 (13 for 45). He was much better Friday night in improving his record to 8-5 2.93 ERA. His only mistake on Friday evening was a solo homer to Desmond Jennings in to lead off the 2nd inning. He held the Rays to 1R/ER in 6.2 innings of work on 8 hits while striking out 5 and walking only 1. He was replaced by Steve Delabar (PIckles for those who have read the Bullpen Gospels) who worked 1.1 innings including striking out the side in the top of the 8th and turned it over to Casey Jansen came in to work the ninth to earn his 19th save on the year.

Jeremy Hellickson took the loss to drop his record to 8-10 3.41 ERA. He made two mistakes and each Moises Sierra and Edwin Encarnacion capitalized by each slugging a solo homer. On the evening he worked the 6+ innings and gave up 2R/ER on 4 hits while striking out 2 and walking 1. Once again the bullpen was superb and kept the game close after the starter left the game as Jake McGee came in to replace Hellickson and worked a scoreless 7th and was followed by Kyle Farnsworth worked a scoreless 8th. The loss drops to 71-61 on the year and the eyes will focus on the scoreboard as the A's take on the Red Sox in Oakland and the Angels take on the Mariners in Seattle. The Orioles appear to be on their way to defeating the Yankees and the Tigers lead the White Sox late.

Transaction: During the game the Rays acquired OF Ben Francisco from the Houston Astros for a player to be named later. Update: According to Marc Topkin TB Times: The Rays have DFA'd Albert Suarez to make room on the 40 man roster for Francisco.

Game Highlights After The Jump

After threatening to score in the first two innings Desmond Jennings led off the 3rd inning with his 11th home run on the season to give the Rays a 1-0 lead.

A Hanging Change Up Goes A Long Way: The Blue Jays came back with a solo homer off the bat of Moises Sierra to lead off the bottom of the third which tied the game at 1-1. 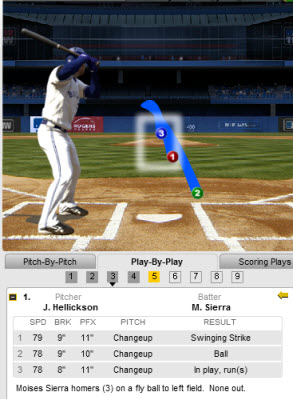 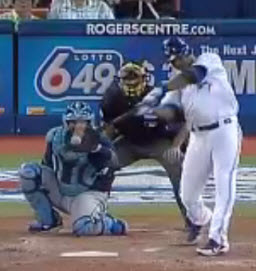 1st Inning: B.J. Upton singled and moved to second with 2-outs but Evan Longoria grounded out to 3rd to end the inning.

2nd Inning: Matt Joyce walked and advanced to second on a Jeff Keppinger single.With one out Ryan Roberts singled to Rajai Davis in left and he threw a strike to the plate to nail Matt Joyce. The Rays still had runners at 1st and 2nd but Brandon Morrow struck out Jose Molina to end inning. 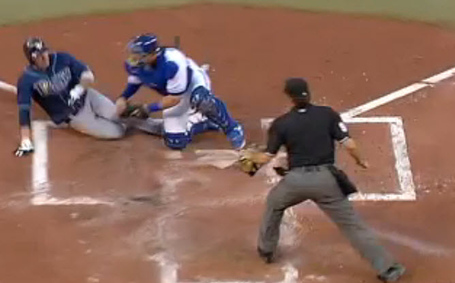 4th Inning: Ryan Roberts connects on a 2-out double but Jose Molina pops out to Adam Lind to end the inning.

6th Inning: Jeff Keppinger lines a 2-out double past a diving Rajai Davis but Morrow struck out Luke Scott to end the inning.

7th Inning: Desmond Jennings drives a ball past a diving 3rd baseman for a 2-out double but B.J. Upton grounds out to second to end the inning.

9th Inning: Jeff Keppinger leads off with a single and is replaced by pinch runner Elliot Johnson. Johnson advanced to second on a Luke Scott fouls out deep to left and Johnson tags up to 2nd. Ryan Roberts struck out. Carlos Pena pinch hitting for Jose Molina lined a single to right but Moises Sierra threw out Elliot Johnson at home to end the game (photo courtesy Jason Collette) 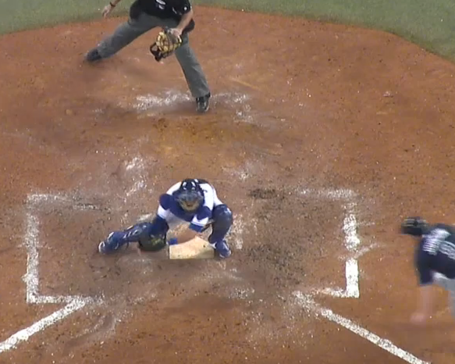