They Shouldn't Be This Bad

Share All sharing options for: They Shouldn't Be This Bad

Up until this point, I have kept my frustration in check.

When people demanded for Shelton to be fired the instant the Rays struggled offensively, I defended him.

As the offensive struggles extended through June, I retorted that it merely was a slump.

When the struggles continued in July, I placed blame on the likes of Hideki Matsui and Brooks Conrad, blindly convinced things would turn around when they were dismissed.

And now, when everything is going wrong offensively for the Rays, I am quiet, permitting the grumblings and exasperation of the fans. Things seemingly have to get better, but that is something that I and many others have been preaching for a while. I am now content with allowing things to settle for themselves, desperately hoping that the Rays hitters can answer the questions and cast aside the doubts with the potency of their bats.

But for now, I am done making excuses. I wish I knew why the Rays offense was struggling so much. Some of the blame can be attributed to injuries. Part of the blame rests on the shoulders of Carlos Pena and Luke Scott. I don't know if Shelton deserves any blame, but at this point, why not speculate? The frustrations of the fans are completely understandable.

There remains one complaint that bothers me; one claim I can not accept. Some have objected that Friedman neglected to address the situation of the offense in the offseason, and because of that, the Rays postseason hopes have faltered.

Simply stated, Andrew Friedman doesn't deserve to be blamed because the Rays' hitting shouldn't be this bad. Even though baseball is an unpredictable game, no one should have seen this coming.

Entering the season, the expectations were high for the Rays. After all, they were coming off a magical year in which, despite all odds, they managed to reach the playoffs. Most of the players were returning, and Sternberg decided to increase the payroll.

To address any concerns over the offense, Friedman issued contracts to fan favorite Carlos Pena and slugger Luke Scott. These additions, and a full year from Desmond Jennings, were expected to bolster an already solid offense, whose ability was often overlooked due to the tough hitting environment at Tropicana Field. The Rays offense was, believe it or not, supposed to be effective.

They weren't supposed to hit .231/.313/.369 with a .302 wOBA and a 92 wRC+. Few claimed the Rays would be an offensive juggernaut, but with all things considered, most should have and did expect the Rays to be a strong offensive team.

These are the pre-season projections in comparison with present day performances.

Only six out of the sixteen players receiving notable playing time have exceeded or met expectations. Several starters such as Upon, Pena, Scott, and Jennings have crippled the Rays with their inability to manufacture runs.

Health has played a definitive role in the distribution of plate appearances. Unfortunately, Rhymes, Thompson, Conrad, and Matsui have all collected more than a handful of plate appearance. Yet, even with Evan Longoria sidelined, the Rays offense should have been better than this.

To determine just how much better that is, I allotted each Rays player the amount of plate appearances they have received thus far, but inserted their projected wOBA instead of their actual wOBA. This chart should give an idea of how ridiculously poorly the hitters have been playing compared to expectations. 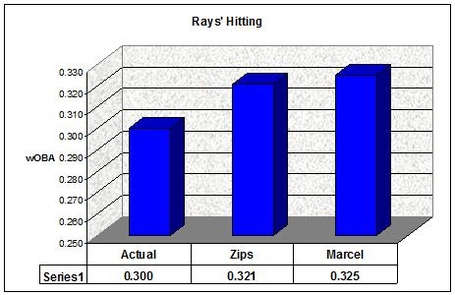 After mulling over this, I find it both depressing and encouraging, if that is possible.

It is depressing because the hitters have been horrific compared to expectations. The gap between .300 wOBA and .325 wOBA is massive. If I'm doing the math correctly, the difference between the two over the 4061 plate appearances comes out to over 88 runs, which is around 9 wins. That transforms the Rays mediocre record of 56-52 into 65-43. Using win percentage, that would make the Rays around a 97.5 win team, or among the best in baseball. Only the Nationals and the Reds would have a better record. So because of the disgustingly abysmal performances by some of the key players, the Rays are shamefully missing out on a tremendous opportunity. It is a testimony of the strength of the pitching that the Rays could be the best team in the AL despite all the injuries.

If there is anything encouraging to derive out of this, it is that the Rays' hitters still have time to turn it around. Many intelligent baseball people have claimed that hitting is contagious, so if Longoria's return can trigger an offensive rebound, the Rays might sneak their way into the playoffs.