This Week in Sun Sports: Jump The Shark Edition

Share All sharing options for: This Week in Sun Sports: Jump The Shark Edition

Welcome back to This Week in Sun Sports, kids. As always, we'll be looking at the oddities of the Rays broadcasts from this past week. Anything from the announcing, to a crazy video segment, to the fans in the stands. If it's on Sun Sports, we see it. Because -- like Rorschach and his trippy mask -- we're always watching.

This week covers Tuesday, July 24th - Sunday, August 5th. If you missed last week's, you can find it here.

We're finally catching up. (And I mean it this time.) Let's get right to it.

Early in this contest against the Orioles, Brooks Conrad smacked a homer off of Wei-Yin Chen. Then, in the seventh inning, Dewayne Staats pulled out the good stuff:

DS: Both of his home runs have come off a left-hander, Chen. He hit one off Bruce Chen at Kansas City and one off Wei-Yin Chen here tonight... So Conrad has a double Chen when it comes to home runs, I guess.

On a scale of Astro on the dugout "Ruff" to Derek "Dutch Oven" Holland "putting a blanket over the Rays offense," I'd call this a solid "Will Rhymes has 21 hits, Lobaton is number 21." If you have no idea what any of that means, you need to read up on your #TWSS.

Speaking of Jose Lobaton, the youthful catcher hit his first Major League home run in the top of the fifth. He received many congratulations from his teammates, but none was better than a gift from Luke Scott: 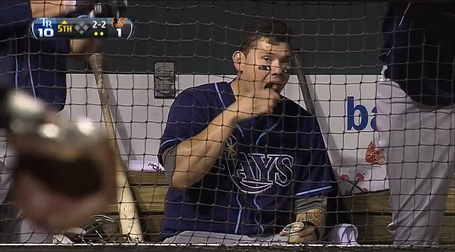 No, that's not R. Kelly's doo doo butter (nsfw), that's some good ole fashioned ice cream. Hit your first homer, get some ice cream. This is a pretty simple game, isn't it?

Some A's players get closer, J.P. Howell makes a call, and Sun Sports jumps the shark after the jump...

In this epic loss that went 15 innings, B.J. Upton looked like he'd given the Rays the lead in the eighth. Unfortunately Yoenis Cespedes came down with the ball and right-fielder Josh Reddick was waiting with open arms like Steve Perry:

So, the crew was a bit loopy with the late west coast start. The extra innings didn't help any. In the top of the eleventh inning, Sun Sports officially jumped the shark:

Maybe 'jumping the shark' is incorrect. Jumping the Archer, maybe? Scootin' the Rainbow?

Y'all have any ideas?

Before the game, BWoodrum caught Dewayne Staats catching up on some light reading: 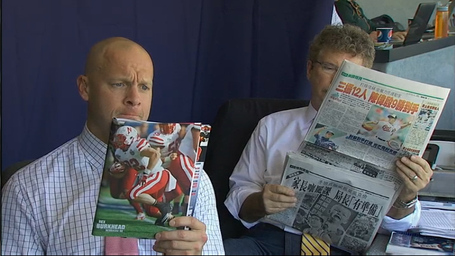 Speaking of offensive lines: BA was looking for some hard hitting action, reading his footbaw mag.

In the top of the eighth, EminenceFront caught Fernando Rodney doing a "hater's gonna hate" walk during a Carlos Pena home run:

I wonder if he pointed out where it landed.

EmFront didn't rest on his #TWSS laurels and spotted another gem a few minutes later, in the bottom of the eighth: 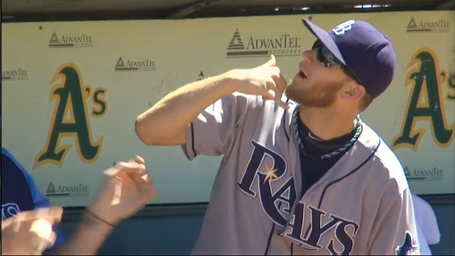 In the top of the second, this daughter chided her mother for trying to 'beat up the beat:'

In the bottom of the fourth, DRB-user Paul Ellis spotted this fat pig: 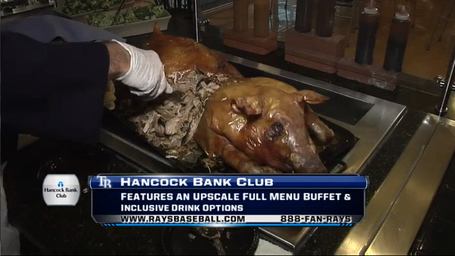 This clip has been around before, but I just wanted to ask: is that appetizing? This isn't a luau. If I'm at the ball park, the only way I want my pig is encased in a red intestinal lining. And who wants just the 'pork?' Can I get some foot or snout with that? What's a man have to do to get some pickled pig's eyes around here?

In the top of the third inning, the camera found Todd Kalas acting like a straight bitch (h/t Paul Ellis): 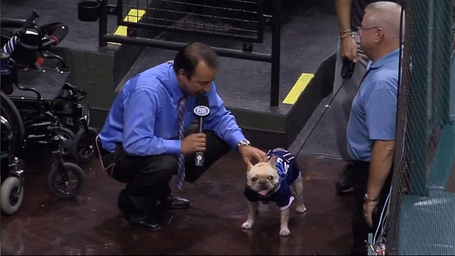 Because all the bitches love Astro! (Get it? Female dogs are called bitches.) Yes, that's the popular canine friend of David Price. TK tried to get a good interview on 'Bring your dog to the park day," but Astro kept him in "the friend zone." He had his eyes set on another:

TK: We're going to head up to the party deck, apparently there's another dog that wants to marry Astro. 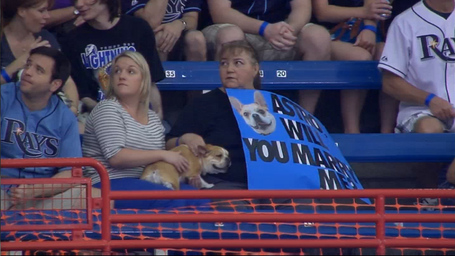