The Rays pitching has been other-worldly this season, but their offense might just be pathetic enough to keep them out of the playoffs. That'd be a colossal waste.

Share All sharing options for: The Rays' Wasted Season And Run Distribution

There are many adjectives to describe the Rays offense. Though bland, "bad" works fine. "Infuriating", "frustrating", "awful", and "humiliating" have probably also been used to convey the mediocrity of this year's offense. If you just pull out a thesaurus and find the word "bad" or "pitiful", you can find a whole collection of words for the offense.

No, the Rays offense isn't and hasn't actually been that miserable. It is below average, and far below the standards of a contending team, but it isn't catastrophically abysmal. More than anything, the offense is simply difficult to watch. The high amount of strikeouts, the few amount of hits, and the infuriating lack of consistency are enough to drive a fan crazy.

Unfortunately, the Rays are allowing a golden post-season dream to fade away. The pitching staff and the bullpen have been incredible, but the offense's performance has hindered the team's ability to win games. With the way this team has prevented runs, they should make the playoffs. There is no exaggeration in that fact.

Given how the Rays have lost close games and faced the "magical" O's recently, another topic to focus on is run distribution.

So far this year, the Rays have averaged 4.15 runs per game. How would they perform if they somehow scored 4.15 runs per each and every game? Automatically, they would win the 78 games in which they surrendered 3 or less runs and lose the 43 games in which they allowed 5 or more runs. This leaves all the games where the Rays scored exactly 4 runs. Since the Rays average .15 more than 4 runs, they should win a few more than half of the 22 4 run games. Fifteen percent (.15) of those games turns out to be 3.3 wins, so assign them another 3 wins. Their record now sits at 81-43. Of the remaining 19 toss-up four run games, let's guess they win 10 (or 9 if you prefer) and lose 9 (or 10). That would make their record 91-52. Obviously, this is not entirely realistic. Instead, it is a simple exercise to emphasize the importance of run distribution.

A consistent offense is a key component to success. The following chart explains why.

As seen, when a team scores zero runs, they have no chance of winning. When they score a very high amount of runs (such as 15+), they have a great chance on winning. In between those two points (0 and 12), the connecting lines do not follow that of a linear equation. Instead, around the 5-10 runs scored range, the win expectancy "maximizes", or shifts significantly higher than it should be. If a linear line were to be drawn connecting 0 and 12 runs, the 5-10 range would lie far above the line.

For a team to get the most out of their offense, they should aim to score around 5 or 6 runs fairly consistently instead of scoring 0 in one game and 10 in the next.

Just as is an offense, win percentages per runs allowed (pitching) doesn't follow a linear path. A 3.23 ERA for a team is a very noteworthy and great accomplishment. However, sometimes one type of 3.23 ERA can be better than another type of 3.23 ERA.

How is this possible? Over the course of a season, the distribution of runs has a real impact on the team's chances of winning (just as it does with the offense, as seen above). For example, over ten games, two teams can have a 4.50 ERA. However, one of these teams could have better positioned their team to succeed. If Team A allowed 9 runs in 5 of the games, and zero in the other 5 games, their win expectancy would be 59%. If the other team allowed 4 runs in half the games and 5 in the other half, their win expectancy total would be 36%.

Looking at the chart, it appears that the key is to avoid the 4-8 run totals. To maximize a team's win percentage with a fixated, given ERA, the team should aim to for a high percentage of their games to be in the 0-3 run range with the occasional very high run game.

This is practically the exact opposite of what an offense should aim to be. For an offense, consistent production maximizes the winning potential. Contrarily, pitching inconsistencies maximize the winning potential. Obviously, true talent (good pitching and good hitting) is the best way to win games, and it is doubtful any team can purposely be consistent or inconsistent. Nevertheless, it is an interesting trend to follow, reminding us of how much variance there is in the sport of baseball.

How do the Rays compare to the AL average? 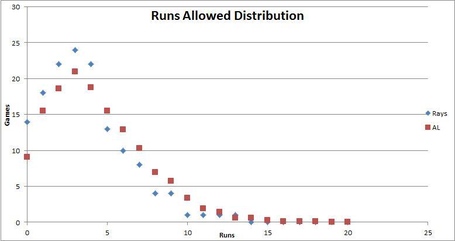 The two charts compare how the Rays have done distribution-wise versus the AL average for this year. The first chart is very basic, showing the amount of games (y axis) and the amount of runs allowed (x axis). As you can see, the Rays are doing a good job in pitching and in distributing their runs over the proper innings. Obviously, since they are a better than average pitching team, they are going to be above average in the good areas (0-4 runs) and above average in the bad areas (5-10 runs).

The second chart breaks down the first one a little more. It shows just how much better the Rays were than the AL average for each type of game with x amount of runs allowed. The Rays are farther from the 0 on the y axis in the 0-4 run areas (nice areas) than the 5-10 run areas (areas to be avoided). This is an excellent sign, showing that the Rays are distributing their runs well.

The Rays distribution of runs offensively hasn't been awful, but it is below average. The Rays' struggles to have games in which they score 6 runs is very evident, although they have have been close to average in scoring 7 and 8 runs. They have a much higher amount of games in the 2, 3, and 4 run range than the AL average. Those run totals need to be avoided (although 4 is acceptable).

Meanwhile, the Rays pitching staff is giving the Rays an excellent opportunity for success. Not only were they good, but the distribution in which they allowed runs was also very beneficial.

Of all the words I would use to describe this Rays' offense, my preference is wasteful. In fact, the season as a whole has been frustratingly wasteful. With the Red Sox falling apart and no AL East team standing out, the Rays could have clinched the division if the offense lived up to expectations. Instead, they have wasted a prime opportunity presented to them by their pitching with lost seasons from the likes of Luke Scott and Carlos Pena.