In a seemingly quiet fashion, Jake McGee is on his way to having one of the best seasons ever by a Tampa Bays Rays reliever.

Share All sharing options for: Awesome Jake McGee Is Awesome

Games like last night aren't fun to watch. I can't imagine they're much fun to play in either. It took nearly four hours after all. Who likes to do any one thing for four hours? Awful, right? Not many things went right pitching wise. Jeremy Hellickson lasted just four innings. Joel Peralta faced just one batter and walked him. Wade Davis was very un-bulldog like. The bright spot was Jake McGee, who worked one and one-third innings, retiring all four batters he faced. That type of dominance has been the norm for McGee this season. So much so that it's not hyperbole to say he's having one of the best relief seasons in Rays history.

When talking about Rays history there aren't many positives to look back on, so saying something is one of the best in team history carries less weight than pretty much every team. From 1998-2007 there weren't many (any?) great relief seasons. Jim Mecir threw 84 innings of solid relief in 1998. Roberto Hernandez racked up 2.3 WAR in 1999. Trevor Miller had his moments. However, most pre-2008 relievers simply weren't very good. Our sample of
15 years isn't a large one, but for the past five seasons the bullpen has been the cornerstone of the Rays' success. To this author there are four individual seasons that belong in the top of the list. In no particular order:

And Jake McGee makes five. He isn't a closer or a setup man, so his season may get overlooked at times, but he's been phenomenal this year: 49.1IP, 2.01 ERA/1.96FIP, 11.68 K/9, 1.7WAR. He's going to finish with ~55 innings and is on pace to have the lowest FIP in team history, for whatever that's worth. His last two months have been the most impressive.

In 15 combined innings in August and September, McGee has allowed five hits, one run, no walks and has struck out 20. It's been an impressive transformation from the pitcher we saw last year for 28 innings. He struck out far less and walked far more, but his minor league track record showed the potential for better results was there. His biggest improvement, and this may just come from experience more than anything, has come against right handed batters. In 10.2 innings against them last year he gave up 20 hits. In 30.1 innings this season? Just 10.

Look at right handers batting average against McGee the past two seasons based on pitch location: 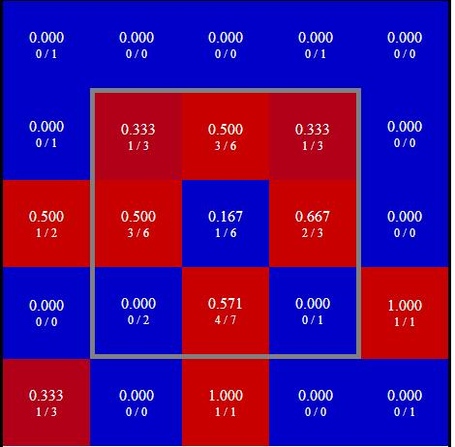 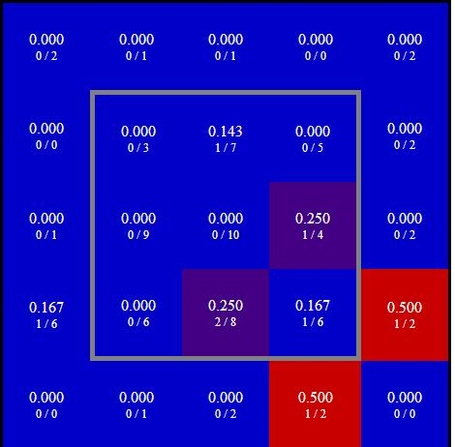 McGee has been invaluable to the pen in assuming Maddon's relief ace role, being thrown into any situation and succeeding. Developing young relievers isnt something the Rays have done in the Friedman era. McGee is the first step in changing that. It's going swimmingly thus far.