The Rays are back, baby! Let me be the first to say it: This team has what it takes to go ALL THE WAY! If the offense can score thirteen runs against the mighty Dice-K and the vaunted Sox bullpen, then the sky's the limit! Carlos Pena crushed the ball tonight and proved that it's not too late to jump back on the "2012 Rays World Series" Bandwagon. This is why Andrew Friedman and the Front Office signed 'Los.

The Matt Garza trade has completely paid off now that Chris Archer earned his first Major League win. Uh, Rookie of the Year, anyone? The kid was a regular Henry Rosinbagger tonight, allowing three earned runs on five hits with six K's and ONLY four walks. The Rays need to let go of the decaying Chet Stedman's in James Shields and David Price and let this young gun shine.

There was much scoring tonight. It occured here, there, and everywhere, but mostly in the sixth inning: 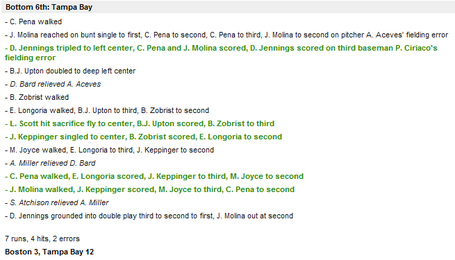 Yes, I am aware that the image says that Jose Molina reached on a bunt single. Somehow this was true. It was basically a push bunt to the right side that Aceves made a rolling pickup and "doh'd" the throw.

The Rays went all Dewey Cox tonight as they Walked Hard ten times against the Sox pitchers. I know the season's nearly over and the Rays have looked like a team with nothing left of late, but just look at the 2012 Red Sox... It could be worse.

Important news about Brad Ausmus after the jump...

Brad Ausmus got a W tonight as a manager of team Israel over South Africa. I don't know if this is true, but the Astros announcer mentioned it, so I'm going to pass that nugget along to you free of charge.