The Rays offense continues to erupt, making us wonder where it's been all this time.

I've said it before, but it's three game swings like these that frustrate the hell out of fans. In the 10 games before this three game win streak the offense scored 32 runs. They've scored 32 the past three games. As frustrating as that can be, man are they fun to watch when they're firing on all cylinders.

The game was never in question. Ben Zobrist's first inning home run got the ball rolling and they'd tack on four more in the second, putting the game out of reach for the reeling Blue Jays. Look at the win expectancy chart. You never seen a straighter line. 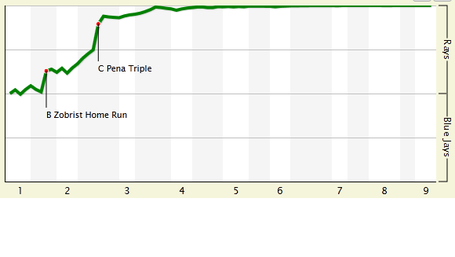 Every starter reached base at least once and scored at least one run aside from Desmond Jennings, who somehow missed all of the fun and ended the night 0-5. When you're 7-8-9 hitters, Carlos Pena, Luke Scott and Jose Molina, go 6-13 with five extra base hits it's safe to assume the offense is going to have a good night. It made for a long night for Toronto starter Carlos Villanueva. He's been pretty good since converting to the rotation in late June but he wasn't fooling the Rays tonight. They jumped on his pitches early and often. Six of the eight hits he allowed came on pitches 1-3 of the at bat. Things couldn't have gone much worse for him or much better for the offense.

On the mound, James Shields was excellent. In his seven innings he allowed just five hits and only one baserunner reached second base. He struck out nine and walked just one, continuing a trend he's been setting over his previous nine starts. Over that time he's walked a total of 10 men and struck out 68. Tonight, like most nights, he dominated with his changeup, striking out four and throwing it 25 times, registering 20 strikes and nine whiffs. His 0.96 FIP on the night was his third lowest of the season. Filthly.

With the A's loss the Rays are 4.5 games back of the second wild card spot. Considering the A's have six road games left against the Yankees and Rangers the Rays chances of sneaking into the playoffs are looking better.