David Price might win the Cy Young; Fernando Rodney might break the ERA record; and Jeff Keppinger might be the best contact hitter in Rays history, but the Rays MVP debate comes down to just two men: Ben Zobrist and Jose Molina.

Through 30 starts -- including Tuesday's 13 strikeout game against the Boston Red Sox -- Price has 201 strikeouts and only 57 walks. It adds up to 5.0 fWAR and a reasonable case for a Top-3 finish in Cy Yound voting (note: Justin Verlander and Felix Hernandez both have lower FIPs than Price, but I believe Price is one of the best-fielding pitchers in the AL right now, and his league-best ERA deserves consideration for that reason).

Fernando Rodney has a 16 ERA-minus and a 56 FIP-minus. He has 8 games to pitch 4.1 scoreless innings, and if he does so, he will beat Dennis Eckersley's 1990 record ERA of 0.61. If Rodney isn't also in the Cy Young conversation, then he is at least a shoe-in for the Comeback Player of the Year.

Jeff Keppinger, a nearly replacement level shortstop for the first seven seasons of his career, came to the Rays with the plan of being the team's anti-lefty second baseman, but has since become the team's most consistent hitter. He has just one month -- the season's first month -- under a 100 wRC+ and has improved his numbers against righties (120 wRC+ albeit with an outlier .324 BABIP) while playing multiple positions around the infield. When Evan Longoria went down with an injury, it was Jeff Keppinger who was first in line for regular playing time, and he has done nothing but excel since then.

So why are none of the these players worthy of the Rays team MVP recognition? Because both Jose Molina and Ben Zobrist have meant more to the team in a real sense; they have played outstanding baseball at the most critical positions -- not just defensively, but organizationally.

One of the items we will have to agree on here before continuing is the definition of most valuable player. In this particular instance, I am not regarding the most talented player in 2012 -- I think that makes the debate about Zobrist and Price alone. I am going with the definition that looks more at comparative advantage -- who has been most valuable to the Rays, not just most valuable in general.

Both perspectives are valid ways to look at the MVP debate, but it is necessary to pick one, and for this piece, let us run with the comparative MVP idea. Price's accolades deserve every bit of attention they have received this season (and then some), but with guys like Chris Archer and Alex Cobb offering a taste of the ever-deep (though not as deep as in the past) Rays pitching depth, it is hard to see Price as a comparative MVP.

Especially when we consider the Rays' catching and shortstop depth.

The case for Ben Zobrist is simple. He's slugger -- who many considered would be the Rays' starting right fielder pending the off-season B.J. Upton trade that never was -- that moved mid-season to the second-toughest defensive position in the game, and he immediately began playing like a Gold Glove candidate there.

He too has only one "cold" month -- a 92 wRC+ in May* -- and he has made now 39 starts at shortstop during the final, most critical month and a half of the season.

Now conisder the sparse depth at shortstop. When Elliot Johnson brought his 88 wRC+ to short midway though the season, it was actually a considerable improvement over what Sean Rodriguez and Reid Brignac had offered. Replacing Elliot's average offense and suspect defense with a 132 wRC+ and solid defense was like adding an extra hitter in every inning and a tenth fielder to the infield.

But Jose Molina, meanwhile, has been great in his own way -- but it's much harder to see his accomplishments. Well. Maybe it's harder to quantify than it is to see:

Jose Molina and Jose Lobaton -- though I think Molina deserves the puma's share of credit -- have made the Rays' strikezone larger than ever in team history:

Short of doing a massive PITCHf/x study (a la Mike Fast or Max Marchi), we cannot yet quantify what Molina alone has done in 2012. But anecdotal evidence (see: that Jeff Sullivan GIF post above) and the massive, universal increase in called strikeouts among the Rays starting rotation suggests Molina has done more than just throw out some runners and pass some balls.

Now add to the equation the biggest surprise. No, his framing was not a surprise. It was just about the only guarantee entering the 2012 season -- the Rays brought him in specifically because of his framing talents. But they also brought him in realizing that he was a 38-year-old, 250-pound catcher with a career 68 wRC+.

But right now, he is one of the team's hottest hitters.

I expected there existed a flickering possibility steady playing time would result in an improvement of Molina's offense, but I was thinking he might hit 75 wRC+. Right now, he's at 80 wRC+ and climbing (assuming his present quad strain does not sideline him too long).

In fact, if we look at a running plot of his wRC+, we see he is definitely improving as the season progresses: 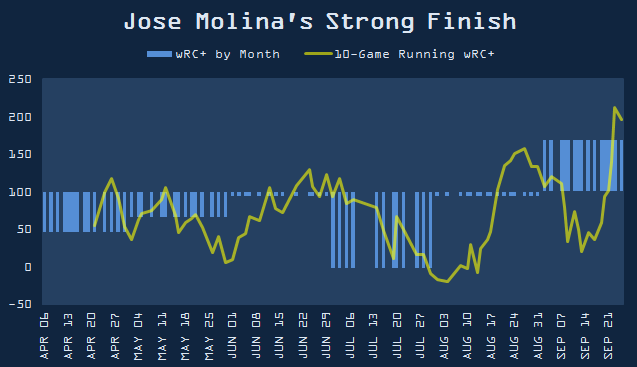 He was ice cold at the end of July and beginning of August, but since then, he has been as sharp a hitter as the Rays could hope for from their catching position. In September, he has hit a 169 wRC+.

Moreover, he has had the best arm at the catching position in what seems like forever. (Kelly Shoppach had a good arm, I think. Maybe.) The Rays pitching staff has a number of bad pickoff moves -- James Shields notwithstanding -- and despite having to work with the never-catch-a-runner types like Alex Cobb (17 SB, 2 CS) and Matt Moore (19 SB, 4 CS), Molina has mustered a 33% CS rate in a league where 25% is average.

So the 80 wRC+ and the great arm combine with bad base running (base trotting?) and bad blocking skills for a 1.0 fWAR package through 274 PA. If we add in the possible 2.5 wins from framing and the (presently) incalculable runs for game-calling, and we get a catcher worth about 3.5 wins while playing just half a season. If he were a younger, healthier Molina and played 500 PA, that would prorate to 6.4 wins.

What's more critical here is that Molina, who signed for a near-minimum $1.5 million (with a $1.5 million option for 2013), has brought considerable production to a position that has been a franchise wasteland comparable only to the Great DH Misery. According to fWAR, the Rays have had the fifth-least production from the catcher position since 2008, second worst in the AL.

So this year, the Rays revamped the roster and philosophy towards catching, making framing a priority, which was good news for Molina and Jose Lobaton, bad news (at the time, at least) for John Jaso and Kelly Shoppach. Jaso is having a stellar year with the Mariners, but his fielding was a legitimate cause for long-term concern for the Rays (the Mariners have used him more as a DH than a catcher in 2012), so trading him away was not an altogether poor decision with regards to the catching depth, even in retrospect.

All told, the Rays have had two amazing seasons from to disparate sources: The slow, lumbering, not-fast veteran catcher and the athletic, slugging, versatile super-utility man. And no matter how you slice it, these are two valuable players.