A New Stadium Proposal: What does it mean?

Share All sharing options for: A New Stadium Proposal: What does it mean?

Yesterday, behind a room filled with hot dogs, popcorn and soda, walls lined with lockers and benches, St. Petersburg's City Council heard a proposal for a new stadium for the Tampa Bay Rays. It was different than most city council meetings as a few hundred people, dressed in a mixture of Brooks Brothers and ball caps, packed the ballroom at the Carillon Hilton.

Flanked by two screens with "St. Pete's Mad for Plaid" plastered across, CityScape gave a massive presentation and has of some of the country's best architectural and construction companies on board. The two hour event was impressive, detailing a parking plan, stadium designs and explaining exactly why they think Carillon is the most ideal landing spot in the Tampa Bay area. The main argument is that Carillon has the highest population within a 30 minute drive during peak PM hours of any of the proposed stadium locations. Some will argue with the numbers but this is what was presented during the meeting. 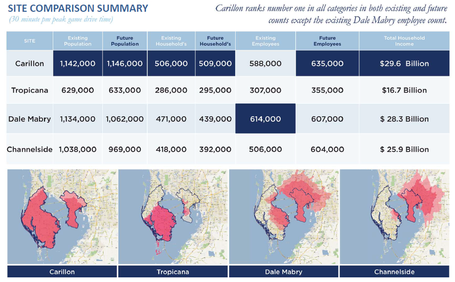 If those figures are accurate, Carillon has a compelling case. As pretty as that map may be, most everyone who attended was interested in two things: The stadium itself and the cost.

The stadium, air conditioned of course, would seat 35,000. One interesting aspect is that there didn't appear to be any actual outfield seats in the few pictures that were shown. It looked to be more of a standing room only type situation, filled with food and drink options and ideal for special events. The transparent wall located beyond left-center field, would be unlike anything else I've seen in sports. The plan is for apartments, businesses and a hotel to surround the stadium, sharing foundations and lowering construction and energy costs.

Click here to see pictures of the proposed stadium

Lastly, and they were smart to leave this toward the end because people start filing out once it was over, cost was discussed. They presented five options, ranging from $424 million to $577 million but said they'd only speak of a payment plan if they met with the Rays.

Love it or hate it, this is the best proposal we've seen so far. If the Rays are interested -- they haven't shown one way or another -- then a dialogue can begin. When asked what would happen if the Rays turned down the proposal, Mayor Bill Foster said "Then we're done."