Share All sharing options for: Following Up On Rays MVP Ben Zobrist

The 2012 season is nearing the finish line but it seems like just yesterday that Matt Moore had to delay throwing in Port Charlotte because of an oblique injury, Matt Bush was catching heat for hitting Evan Longoria in the hand during batting practice causing him to miss time, and we held our collective breath as Desmond Jennings and B.J. Upton collided at full steam in the outfield. As the Rays broke camp we were relieved to find out that Kyle Farnsworth's elbow injury wasn't as severe as we first thought and he'd (cough) miss only 4-6 weeks.

Despite the drama of spring training, a time which they had to overcome injuries, personal crisis, and poor defense they jumped out to an April record of 15-8 record before losing Evan Longoria to a hamstring injury. After Longoria went down the team had to overcome a string of injuries over the next several months but they were able to play well enough to keep their heads above water. Each player got healthy and returned to the team which seemed to be made whole again with the return Evan Longoria to the lineup on August 7th. The Rays had endured through it all and were 56-52 trailing the Yankees by 7 games in the AL East and only 2 games out of the wild card.

After an afternoon of debating the merits of Zobrist as a 2b, a RF, and whether he was worth the contract extension that he had signed it was time for the struggling Rays to take on the Miami Marlins in their new park. Zobrist began the process of answering the question of who the real Ben Zobrist was by hitting .636 (7 for 11) with 2 homers, 3 walks, and a stolen base leading the Rays to a weekend sweep.

The highs and lows of Ben Zobrist from the beginning of 2011 through 2012 are depicted in the wOBA and wRC+. It should be noted that September data is included in the charts but data only includes 20 PAs. 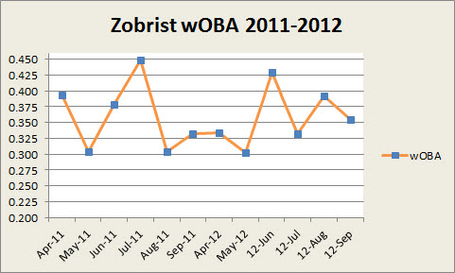 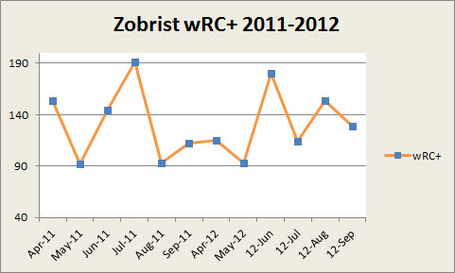 The discussion will soon shift to who is the Rays MVP and the conversation will center around David Price, Fernando Rodney, and Ben Zobrist. Some will argue that David Price is a starting pitcher and only is a factor in 35 games a year. Others may argue that Price's durability has played a role how Joe Maddon managers before a Price start and after making Price a factor in around 100 games a year.

The mere mention of Fernando Rodney as team MVP will lead to some heads exploding as their is a strong well founded belief that the term "closer" and "MVP" should never be used in the same sentence together. The argument against Rodney is that although he has been great in his role it is a team function to get him the ball with a lead. Others may argue that with Rodney doing such a fantastic job Joe Maddon was able to mix and match the middle innings increasing the number of games that the Rays get to the 9th with a lead and thus they have an increased win total.

For me, it will be hard to vote against Ben Zobrist. He has been durable, versatile, and he continued to hit while it seemed that most of the rest of the offense (sans Matt Joyce and Jeff Keppinger) continued to struggle.