Share All sharing options for: Matt Moore's Struggles With Consistency

On Wednesday night, Matt Moore cruised through the first three innings. He struck out 6 of the 9 batters he faced, working at a very quick tempo. It seemed like Moore was going to have a special outing. His fastball, curveball, and changeup were all working to devastating proportions. Then the untimely fourth inning came.....

I could just restate the exact sequence of the fourth inning, but perhaps this image does a better (and quicker) job:

So how did Moore go from brilliance to disastrous in one inning? We can all form our own hypotheses as to why. Mine is that Derek Jeter's reached on error single and the Yankee's veteran whiles disrupted Matt Moore's rhythm.

It's beautiful to watch Moore when he dominates in his pitching with a quick tempo. When at his best, Moore takes the sign, throws the pitch, catches the return throw, and goes straight into the next pitch. He doesn't shake off signs or take a step off the mound. His mechanics are smooth and natural. He doesn't stop to deliberate. He simply pitches. The same thing often happens in perfect games. When Felix Hernandez perfect game'd the Rays, he was firing strikes, working at his second quickest pace of the year. Mark Buehrle, in his 2009 perfect game versus the Rays, might have been pitching the fastest pace ever by a starting pitcher (I can't find a ranking of individual "Pace" stats for each game). He only took 14.3 seconds between each pitch!

A huge part of what sets a pitcher's rhythm or tempo is their pitching pace (speed). Some pitchers succeed without a fast pace, but for Moore, it appears (an unconfirmed but sensible observation) that a quick tempo is very helpful. Out of the 94 qualified pitchers in MLB, Moore ranks 29th overall in Fangraph's "PACE" stat (for explanation, click here).

In the third inning, from my calculations, Matt Moore had a pace of 19.2 seconds between each pitch. However, in the following inning in which the Yanks scored three runs, Matt Moore had a much slower pace of 24 seconds. Part of this had to deal with Matt getting out of rhythm with runners on base. Another part had to do with the veteran Yankee's smart decisions. After falling behind in the count 1-2, Jeter took some time between the next pitch, walking across the plate, very deliberate in his actions. This forced Moore to slow down and wait, unlike the previous inning. Robinson Cano also called for time twice, both times as Moore was just about to fire a pitch. Matt Moore's command slipped; he was uncomfortable, and his pace slowed.

This year, Matt Moore has struggled when runners have reached base, disrupting his rhythm. The following charts depict these struggles. 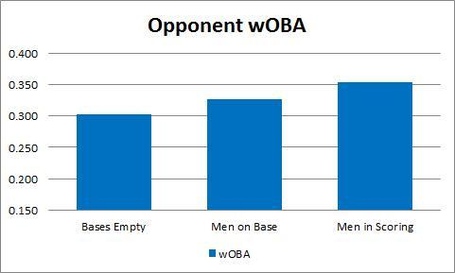 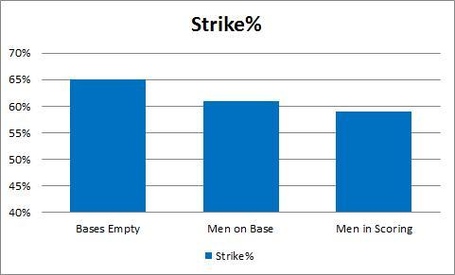 To many, Matt Moore's rookie season has been frustrating so far. It isn't that he has been a bad pitcher, because he has not. He has been quite good for a rookie pitcher. Much of the aggravation is due to Moore's youthful inconsistencies. In many of his outings this year, he has initially dominated only to fall apart the next inning. Whether it is a mechanical issue, a poorly located pitch, or a botched defensive play, Moore has struggled to keep a consistent tempo throughout any start this year. When batters reach base and his rhythm is disrupted, he has pitched poorly.

Luckily, the Rays have Matt Moore locked up through 2020, so he has more than enough time to iron out this issue. And when he does finally become more consistent and keeps a quick pace throughout an entire game, Matt Moore will be one of the best pitchers in baseball.