The Rays Tank: The Hall of Fame Begins A Slow Death

MLB has done its job to remove steroids from today. No action by the BWAA can ever remove them from our past.

Share All sharing options for: The Rays Tank: The Hall of Fame Begins A Slow Death

When it was announced that no one on the ballot would be elected to the Hall of Fame this year - the first time since 1996 - MLB released a statement claiming they stand behind the process:

"Major League Baseball recognizes that election to the Hall of Fame is our game's most extraordinary individual honor. Achieving enshrinement in Cooperstown is difficult, as it should be, and there have been seven other years when no one was elected by the Baseball Writers' Association of America. While this year did not produce an electee, there are many worthy candidates who will merit consideration in the future. We respect both the longstanding process that the Hall of Fame has in place and the role of the BBWAA, whose members have voted in the Hall of Fame's elections since 1936."

First, let's acknowledge the issues in backing a "longstanding process" for tradition's sake.

Baseball has already accepted that feelings of frustration and irrelevancy on behalf of the younger baseball audience is worth less than than the cost of instituting instant replay, electronic batting order cards, robot umpires and manager challenges, cordless phones and video monitors for the bullpen, or whatever other issue that could possibly be mitigated by embracing a new era of technological advancements. There's a process, and like everything else, let's assume MLB is content to keep it the same. But why?

I've heard it said that history is written by those who won the war. It seems this has implications in baseball as well. The war in the minds of the BWAA is steroids, and twenty years after the fact, the opportunity has come for some middle aged (or older) baseball writers to decide what constitutes the moral high ground in baseball (which has it's own troubling implications), and then attempt to erase those famous and seemingly undeserving athletes from the record books.

But there's a problem with this strategy. While the purpose of the Hall of Fame can be construed as many things, in my understanding, it's a museum. A museum of the greatest players and events in baseball history.

The Hall of Fame should foster baseball enthusiasm and encourage fans to visit moments in history. If those moments and players that I remember are not enshrined in the Hall, my incentive to visit Cooperstown is dramatically decreased. As Dan Brooks said, "What bothers most of the "Sabermetric" community about the way the BBWAA treats the "Steroid Era" is that for many of us it's the only era." The lines are becoming more stark: from new school and old school, to now young and old. I don't have an interest in this process of selective history. I want to see it all, and especially the players and moments that I lived.

Don't get me wrong, it's not that I don't care about the old stuff in the hall. I welcome it. Let me see the negro leagues, the Black Sox, and the horrendous racism. Let me see the spitball and the days of cheating with chewing tobacco. Let me see Ruth and Williams and Musial enshrined.

But let me also see the history I can remember. Let me see the Strike of '94 that ruined the Expos' only chance at a World Series. Let me see the home run race between McGwire and Sosa. Let me see the steroids era in its entirety, and to hell to anyone's opinion that the real history of a decade in the sport should not have a place in the museum! Ignoring history does not keep us from remembering it.

Furthermore, keeping any player out of the Hall does not erase his legacy. The only thing this process shows is that the few are not bold enough to accept history as fact.

There might come a day when none of these highly regarded, historically monumental baseball athletes get elected to the Hall, and their opportunity will have expired - and on that day the Hall will be dead. Until then, Copperstown is experiencing a slow death (and it's not just financial). The BWAA has made their statement. Now is the time to stop the bleeding, or bring in new blood. Otherwise, the Hall will be an afterthought in the annals of baseball history, along side Pete Rose's hit count and the McGwire-Sosa arms race of '98.

Note: I should mention that not all of the writers in the BWAA casted ballots of ignorance, but the failure of the whole is still worthy of ire. You can view the ballots here, and judge for yourself.

- Jonah Keri calls bull on the BWAA shenanigans, beginning with an argument that denying steroid users but accepting amphetamine users seems somewhat inconsistent, then continuing to dismantle the rest of the foolish justifications of this year's voting trends, and ending with suggestions to fix the process. It's gold.

- Tommy Rancel notes the progress of Chris Archer and wonders if he is on his way to an extension.

- In case you missed the news, David Price has been selected for the cover of MLB2k13, "a dream come true!" He is the second Rays player to grace the cover (Evan Longoria was selected in 2010), so this might be the second time I buy the game. The Million Dollar Challenge for pitching a perfect game will return in the new edition. 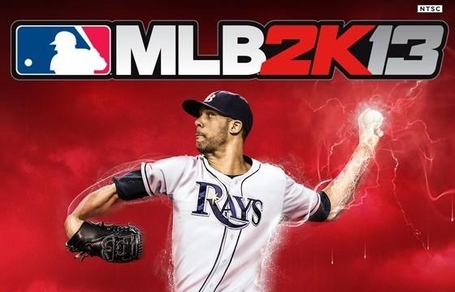 - Fangraphs: Preempting the impending trade rumors with the Nationals for Mike Morse, Jack Moore investigates how Jake McGee changed his arm slot to elevate his game, and wonders if the changes are here to stay. (I'm gonna say yes, and let's keep him.) Also, Jeff Sullivan is looking for "the next Jose Molina".

- Finally: my favorite tweet from yesterday, from Craig Calcaterra.