The Rays Tank: No Expanded Replay This Year

The Rays Tank: There will not be expanded instant replay in 2013

Share All sharing options for: The Rays Tank: No Expanded Replay This Year

Despite Bud Selig saying three months ago that we'd "for sure" see expanded instant replay by this season, Major League Baseball won't be getting anything of the sort. The talk was about expanding replay to include fair/foul and trap calls this season, but baseball will instead wait a year and try and go all-in with a system in 2014. They just aren't sure how exactly it's going to work yet. I agree with Craig Calcaterra that a challenge system would be terrible.

The simplest solution to me would be putting an ump in a booth somewhere, be it at the stadium or in the MLB offices, with the power to communicate to his colleagues. Sure, not all games are currently televised so you don't always have a crystal replay of what happened, but there are ways around that. Baseball made a bazillion dollars last season, they can afford the cost of any improvement. Calls like (he was called safe) this shouldn't be allowed to happen in 2013 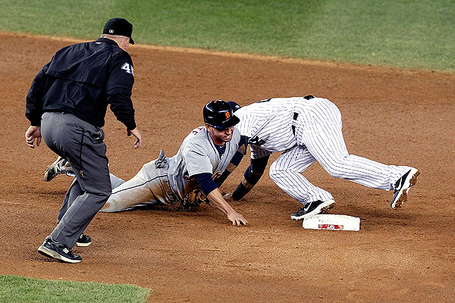 In Rays news, Bill Chastain wrote about Cesar Ramos at mlb.com. Ramos, 28 and entering his third year with the organization, is currently the other lefty in the Rays pen along side Jake McGee. He's also out of options, which means the Rays can't ship him down to Durham without the risk of losing him on waivers. He pitched well out of the bullpen last season (2.10 ERA/3.23 FIP) albeit in just 30 innings. He's also able to go more than one inning, or one batter, at a time, filling the long man role. Last season only 2 of his 17 appearances lasted less than a full inning. The Rays will surely invite more relievers to spring training, but Ramos has in the inside track on a full time gig in 2013.

-Jeff Sullivan takes a good look at Livan Hernandez and Eric Gregg in Game 5 of the 1997 NLCS.

-On the heels of Manti Te'o, Sam Miller tells us about baseball's greatest hoax.

-Ex-Ray John Jaso shaved his beard. It was glorious.