While the common perception is that Joyce is awful against LHP, there is a case to be made that he is serviceable against them.

In the top of the fifth inning of a contest between the Rays and the Yankees on May 9th, Matt Joyce stepped up to the plate with the bases loaded and two outs. The score was 1-0 Yanks, with David Phelps their starting pitcher. Even though Phelps only had 89 pitches, he was right handed and Joyce was at the plate in the month of May, so Joe Girardi went to the 'pen and brought in his left handed specialist, Boone Logan. In 2012, Boone Logan had a 2.72 FIP versus left handed hitters. While he still faces some right handed hitters, his value is in his ability to retire left handers.

The first pitch, a slider, missed the zone for ball one. The second pitch was another slider, this time catching the low and away portion of the strike zone. The third pitch was in the middle of the zone, but it was another slider, and Joyce did not seem keen about swinging at one. The fourth pitch resulted in a swing and miss for strike three. It was perfectly located on the outside corner; once again, it was a slider. The Yanks escaped a jam, and the Rays' chances of winning dropped 10.5%.

The most common assumption is that Joe Girardi brought Boone Logan into the game because Matt Joyce struggles against left handed pitching. That is a fair assessment, considering Matt Joyce's weak career statistics against southpaws (career 74 wRC+). I, however, disagree; I believe that the decision to bring in Logan (should have) happened more so because Joyce destroys right handed pitching (career 132 wRC+). Most likely, the decision accounted for both factors, but I personally will continue to assert that it had more to do with the latter.

I am a firm believer that Joyce's struggles against heft handed pitching are severely overblown. Perhaps that is why I noticed a(n unconfirmed) pattern with Joyce last year. While managers consistently brought in lefties to face Matt Joyce, they were not so quick to do so with other players with large splits, particularly Carlos Pena. It appeared to me that Joyce's ability to hammer right handed pitching forced him to face a high amount of specialists, which in turn caused his splits to appear worse than they were. After all, if Joyce faces a relatively high percentage of guys who are very good at retiring left handed batters, then his numbers against all left handed pitchers should be worse as a result.

To test this, I looked at all the left handed pitchers that Joyce faced in 2012, finding their career wOBAs against left handed pitching. After combining these numbers, I found that left handed hitters had hit for a .290 wOBA against these pitchers (lower than normal for a lefty on lefty). Joyce hit for a .286 wOBA versus these pitchers. However, these raw wOBA numbers are not park adjusted. After adjusting for the Trop using Fangraph's park factors (and ignoring RH/LH splits due to a lack of difference), I calculated Joyce's park adjusted wOBA to be .301. (.301 = .286/.95)

The wOBA numbers for the pitchers was weighted based on the amount of plate appearances Joyce faced them.

Now the question is this: what if Joyce had faced typical lefties instead of the more difficult type? What if he didn't have 19 PAs against pitchers who held left handed hitters to a sub-.250 wOBA. I am working under the assumption that Joyce would still hit 3.8% better against these typical left handed pitchers. This may or may not be the case, but since it is the most logical way and this is an exercise in fun, I proceeded. 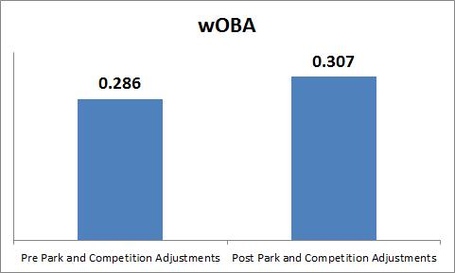 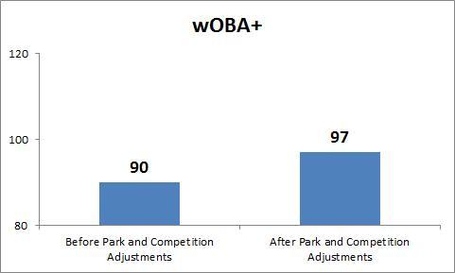 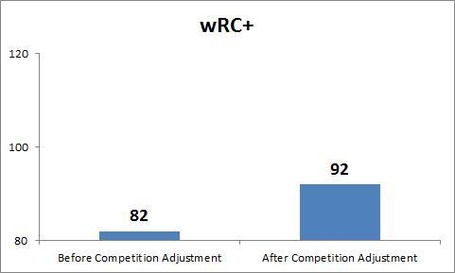 Please note that wRC+, by definition, was already park adjusted.

I am not proclaiming that Joyce, against LHP, was close to a league average hitter last year. I am merely suggesting that his bat versus LHP is underrated because of the difficulty of the pitchers he must face. Unfortunately, this is a problem with no clear solution. So long as Joyce continues to crush right handed pitching while not doing the same against left handers, managers will continue to exploit his split.

Four innings later in the May 9th ball game, Joyce came to the plate with the score just tied 1-1, two men on base, and two outs. David Robertson (RHP), the Yank's closer, was the pitcher. Clay Rapada (LHP) was warming up in the bullpen, but Girardi stuck with his right handed closer. Joyce saw a 1-2 fastball and launched it into the seats beyond right field. Rays 4, Yankees 1.