Let's recap a few events from the internet.

Yesterday the Rays staff packed the up their gear for Port Charlotte, and James Shields dropped by the truck to say goodbye to some friends at Tropicana Field.

After watching Big Game James play for seven seasons, it's nice to have one final reminder of this guy's great character.

Rays load equipment truck - with a special guest (via tampabay.com)

Rays clubhouse/equipment manager Chris Westmoreland is featured in the video discussing moving day, and is the first to model the latest change to the Rays uniform - one of the new sunburst batting practice hats.

The Zobrists posted this picture to Instagram, which Marc Topkin called "cute": 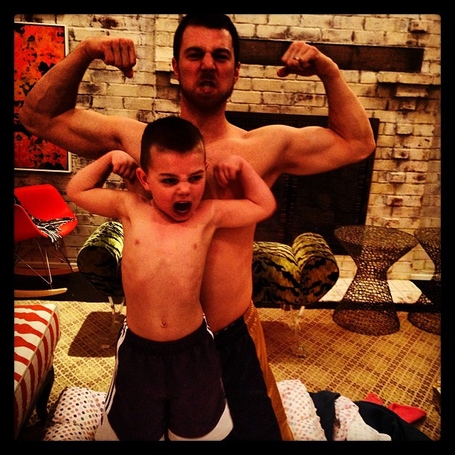 Two tickets to the gun show (via instagram.com)

And for a minute there, twitter blew up with rumors that Fernando Rodney had a two-year extension on the table. Apparently he doesn't, so...

- Verducci has named Alex Cobb as one of his at-risk pitchers for 2013, but if you haven't read the pizza cutter's take on debunking The Verducci Effect, you should.

- One of my favorite prospects, Trevor Bauer, posted on youtube with a video of his favorite pitch grips.

- The Hardball Times complimented the way the Astros are rebuilding their organization the right way.

- Finally, for those interested in learning more about bird watching, this site is particularly helpful.