Games 1 and 2 of the American League Division Series.

Share All sharing options for: The 2013 Post-Season in Review: Part 2

Allow this retrospective to take you back through the Rays' post season journey. 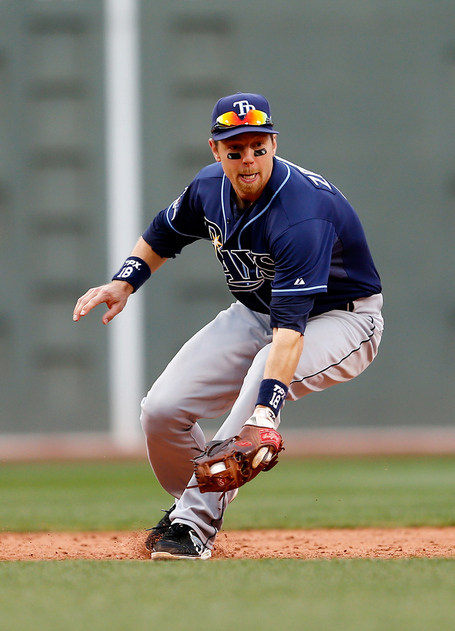 The opening ceremonies rightfully honored those injured in the Boston Marathon bombings, and the logo of "Boston Strong" was etched into the center field grass. They meant it culturally, a rally for the people of a city greatly effected by a terrorist attack, but Boston the team would indeed be strong.

On a rainy day in Massachusetts, the sun peaked through as the Rays and Red Sox took the field. Shadows loomed over the space between home plate and the pitcher's mound the same way the Boston offense was waiting for the Rays. It had been five days since the Red Sox played anyone, and they were itching.

But first, Jon Lester struck out the side.

Lefty Matt Moore was given the start, with Price and Cobb still resting from their elimination performances, and kept a clean first frame, despite hitting Victorino with a pitch (he led baseball in HBP's). Outside of a walk in the second, the next two frames were clean as well.

Sean Rodriguez backed Moore in the second with a classic Fenway home run, crushing a pitch from Lester high and inside and a mere 389 feet to left center -- not even the warning track in Tropicana Field, but a home run in Boston nonetheless. The Rays drew first blood. Zobrist followed suit in the fourth inning, again on a Lester pitch high and inside, sending this one 359 feet to the left field corner and over the monster.

That 2-0 lead would be all the Rays would get.

After a single, Wil Myers would track down a fly ball by David Ortiz for the warning track, but infamously back off at the last second, one way or another under the impression that Desmond Jennings was claiming the catch for his own. Moore earned a pop up with two in scoring position, then allowed the runners to score on a Jonny Gomes double. (Oh, Jonny.) Moore even got Saltalamacchia swinging for the second out.

If we could do it again, and Myers caught that ball, the Rays would lead after four with a 2-1 lead.

Instead, the Red Sox blew the doors off. Stephen Drew reached on an infield single, barely edging Moore to cover first base and scoring Gomes. Will "chicken pox" Middlebrooks doubled another run. Ellsbury then struck out swinging -- but he didn't, when Lobaton couldn't corral the pitch and Ellsbury advanced to first base. Shane Victorino then singled in two more before Pedroia returned to finish the frame he started, grounding out.

Meanwhile, defense was entirely missing for a key position in the Rays infield. After Ben Zobrist took a slide to the knees from Shane Victotino, the Rays stud second baseman -- who has ranked second in defensive metrics at that position in the American League this season -- looked like he had the yips. His throws became errant and wide, and the problem would persist throughout the series.

Tough breaks. The Red Sox would finish the game with a 12-2 victory. 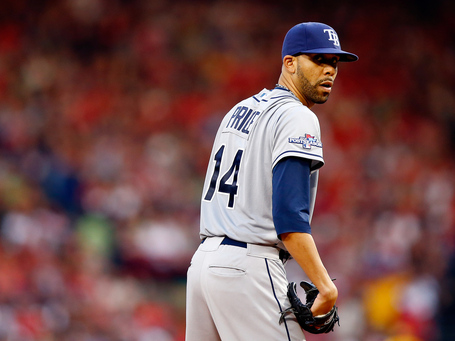 In Game 2, David Price took the mound against the team he dominated ruthlessly during the second half of the regular season:

Then 7.0 IP with seven runs and five K's. David Price had a difficult time placing his pitches. After he had painted the edges of the strike zone in Texas, Price could only put his pitches over the middle, and the Red Sox feasted -- including David Ortiz, who before this game had never homered off David Price. In Game 2, he did so twice. Stood and admired. Beat his chest as he crossed home plate. It was infuriating.

The Rays did their best with 12 baserunners and 4 runs, but Wil Myers was silent at the plate, going oh-for-five with two or three scoring opportunities along the way. The crowd incessantly chanted MYY-ERRSS, MYY-ERRSS every chance they got, and although the fielding was clean in right field, he never found payback with his bat.

Myers had his best chance to contribute to the Rays scoring effort in the fifth, but his liner to right field was tracked down by Victorino. Loney would double in the two runs Myers missed out on, and Longoria followed with a walk, but Ben Zobrist made the mistake of taking a full-count changeup inside, and the umpire rewarded John Lackey with a much needed strikeout to salvage his efforts. The decision to not foul off the pitch was another mistake by Zobrist, and another tough break.

The other Rays scoring opportunity came in the sixth inning, when Lackey's velocity was shrinking, and Joe Maddon made the decision to pinch hit with Matt Joyce. I've already taken a deep dive into why this decision projected to be a great idea, but was actually a mistake, but the long story short is that Lackey was on a short leash. When Maddon pulled Joyce, the Red Sox were able to bring in Craig Breslow, a lefty who played out of his mind in the ALDS.

David Price would pitch the entire game, and stave off the Red Sox (except, somehow, for another Ortiz HR). The Rays' scoring opportunities came to an end, Tazawa took the eighth, Uehara the ninth.

We lost again. After the game, Price had his now infamous tirade and tweets, most notably giving a backhanded insult to TBS broadcasters Dirk Hayhurst and Tom Virducci by telling them to "save it, nerds!" It was an outburst that will be covered in every Rays' media training day in spring training from here forward, but it was also genius for the darling pitcher from one of the most sabermetrically oriented franchises to call two baseball pundits-at-best "nerds."

That respite aside, however, a loss is a loss -- but it was a five game series, and the Rays had played elimination games before. 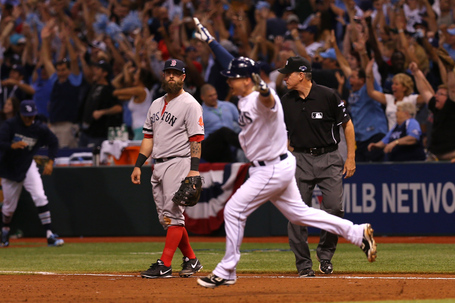