David Price just pitched the first complete game tiebreaker since the Mets faced the Reds in Game 163 in the previous century (okay, it was 1999). Even stranger, it was the last thing we all expected.

The Rangers were a powerful team with plenty of right handed bats, with a history of crushing the Rays' playoff dreams (see: 2010, 2011). Worse yet, small sample sizes acknowledged but being ignored, Price had yet to pitch to success against the Texas club during the post season.

The Rangers had his number, and that feeling hung ominously over the game, but Price delivered.

Fastballs were mixed well: high and low, left and right, painting edges and nailing corners, within a fair strikezone.

Joe Maddon was well aware that David Price wanted to finish the game, and better yet, he wanted to give it to him. I couldn't believe my eyes. 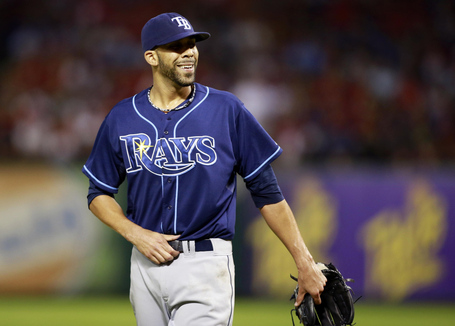 In the first inning, Price threw only 5 strikes in the zone, but that's deceptive to say. You could have been worried immediately, but the first batter struck out looking. The next walked but would get picked off, and it was a clean frame on an Alex Rios ground out. Things were going Price's way from the get-go.

The line up was stacked against Price with plenty of right handed power hitters, but Price buckled down and got to work. After the first inning jitters, Price pounded the inside of the zone against RHH; and contrariwise, Price either went low and away or distracted above the zone against lefties.

The process was great, but not entirely successful. After a ground out to start the sixth, Price allowed a single to Elvis Andrus, a steal, and then a deeeeeep shot to left-center by Rios, that came down at the top of the wall. A run scored, and Maddon was prepared to lift Price when he wrapped up six innings. He even had Jake McGee and Brandon Gomes warming in the pen, as well as Joel Peralta later in the game, but Price came back with two more groundouts to end the sixth inning, getting Beltre with a fastball inside, and Pierzynski on a splitter -- all on three pitches, and each well in the zone, placed in the middle -- and proceeded to shut down the Texas offense, glove flip included.

However, Maddon's deciding factor in leaving Price in the game was not the results. Price had been close to a strikeout per nine innings all season. The lackthereof in this game, and the meager four whiffs on the evening, could have been disconcerting if not for Jose Molina, who'd stay in the game to catch for Price. When asked for his opinion by Maddon, the catcher reported that Price was increasingly hitting his spots, and doing so well. Price could finish this game. That was what Maddon needed to hear.

To do so and pitch the final three innings, Price abandoned the previous strategies and spread out the zone.Suddenly, the batters weren't getting anything they were used to. David plowed through the remaining Rangers, recording five ground outs, two fly outs, and a strikeout swinging on a foul tip by Nelson Cruz.

He stood by the mound as Yunel fielded the final out, pointed at the shortstop and yelled, "That's what I'm talking about!" as the team barreled in. Molina patted vigorously on the back as Longoria swooped in for the hug, and the team piled in from there. 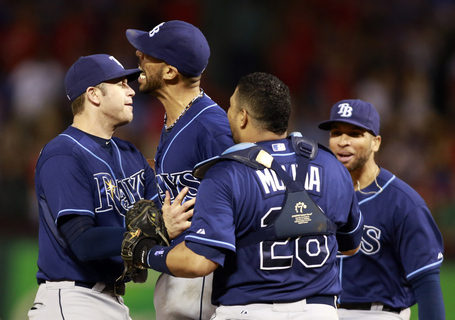 Part of the reason why my response to David's performance took so long was the invariable comparison to James Shields, and I had to check myself.

Do I miss James Shields? Yes, always, but David Price is so far removed from being "Big Game" Shields. How can we compare? Well, the aura was there. Price had all the passion and dominance standing on the mound that gave him the presence of a team leader. But there were more tangible aspects:

First of all, Price took the mound and never gave it up, pitching a complete game when the Rays really needed to rest their high-leverage bullpen arms (after a taxing series in Toronto last weekend). David Price had never pitched more than two complete games in a season before this year when he found three to his credit. Monday night, that became four -- doubling his previous best, and making Price the American League leader in complete games.

After the game, Price discussed at length how he's been asking for more innings all year long, reiterating how badly he wanted to be the one to finish this game as well. When the Rays sent off James Shields to Kansas City this season, the big question was who would fill those innings and save the bullpen. Price clearly has wanted to be that guy, pushing himself beyond 100 pitches in multiple starts leading into his triceps injury in May, but on Monday he finally was.

There were nights when Shields would be on fire, mowing down 10-12 batters in a complete game, but other times it was a slow burn. High pitch counts, plenty of hits, and a battle through performance to win the game. Shields's final performance in 2011 against New York comes to mind (Game 160), which set the stage for the historic Game 162 at the end of the three game series. 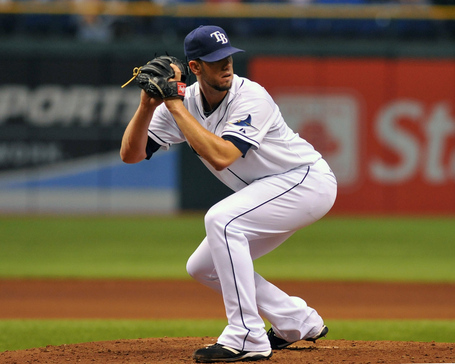 Second, and most obviously, we saw two pick off moves from Cy Price; how very Shields-like. The first came on some excellent positioning by James Loney, who adjusted his back leg as he fielded the throw-over from Price and blocked the runner Elvis Andrus from reaching first base in time. The second came when Ian Kinsler took off on first move by Price, who deceived the runner after multiple checks at the bag by lifting his leg in a traditional manner while he was prepared to throw to Loney again.

Of course, Shields is right handed and what makes him an excellent pick off artist is his speed on the throw to first, but Price was able to find similar results as to what we've seen from James in previous seasons, and that's noteworthy.

Finally, there was Price's perchance for the breaking ball, specifically earlier in the count. Price is a fastball pitcher who lives and dies by great control, but Texas is a team poised to mash the harder thrown pitches placed close enough to swing at.

Depending on your sources the observation might be different, but it's evident that Price still leaned heavily on his fastball, but alternated his approach between a more traditional four-seam movement, and a breaking splitter, driven by variations in horizontal movement, grip, and spin rates. Looking past the "fastball" label, Price mixed all of his pitches well, with 57% of his pitches breaking around seven inches in horizontal movement (sinker-changeup-curveball), coupled with 26 four-seam fastballs and 25 cutters (which have a difference of almost ten MPH) on a more straighter trajectory.

Furthermore, Price was not afraid to use his breaking stuff on first pitches; a transition made farther into the game. Over his first twelve batters, Price had used his four-seam on the first pitch of eight appearances. For the rest of the game, Price opted for breaking pitches in the majority of at-bats (12 of 22). This willingness to use breaking pitches early in the count was enough to keep the Rangers off balance, especially in the final four outs of the game.

All these things gave Price the edge in a game he desperately wanted to win. The Rays got their champagne shower, and hopefully we'll see another dominant Price against a more left-handed team in the Red Sox -- but first, the Rays will have to get past Cleveland...