This off season, Wil Myers could join the likes of Evan Longoria and Jeremy Hellickson to be the third Rays player to win Rookie of the Year.

Share All sharing options for: Wil Myers: Rookie of the Year Candidate

While the actual award will not be given out until November 11th, as awarded by the BBWAA, this week we were treated to a cursory announcement: Sporting News had tallied its player votes, and named Wil Myers the Rookie of the Year.

Is it the first of many to come?

"Leave It To Wil"

There are three words that come to mind when I think of Myers's rookie season (if you can pardon my alliteration):

When Myers stands at the plate, you can't read anything on his face. He's cool and collected, waiting for each pitch, working the same batting stance as Evan Longoria and swinging just as well.

He's also confident, too the point of being comical. You wouldn't know it from his demeanor in the batter's box, but Wil Myers in the dugout is nothing but one liners on how great he is. He thinks he's the best, he knows he's the best. It keeps his head held high and squarely on his shoulders.

"Leave it to Wil" is what Myers told the dugout before his first walk off hit of his major league career. And he was right, the Rays certainly could:

Zobrist is on record saying it's not cockiness, and his dad says he's just being too honest. However you slice it, the kid knows he's good, and he's goofy about it -- that's how we get ridiculous comments like "Leave it to Wil," and that's also how we get walk offs with the bases loaded.

Yes, you can say the rookie was "clutch" -- and don't freak out, but the data supports it:

"Clutch" is not a statistic, "clutch" has no bearing on sample size, but it does rear its ugly head in splits.

Impressively, Myers only got better with higher leverage situations, which (for better or worse) is not something I necessarily expect from a rookie. This doesn't have a direct impact on Rookie of the Year, but it sure as hell ain't false. 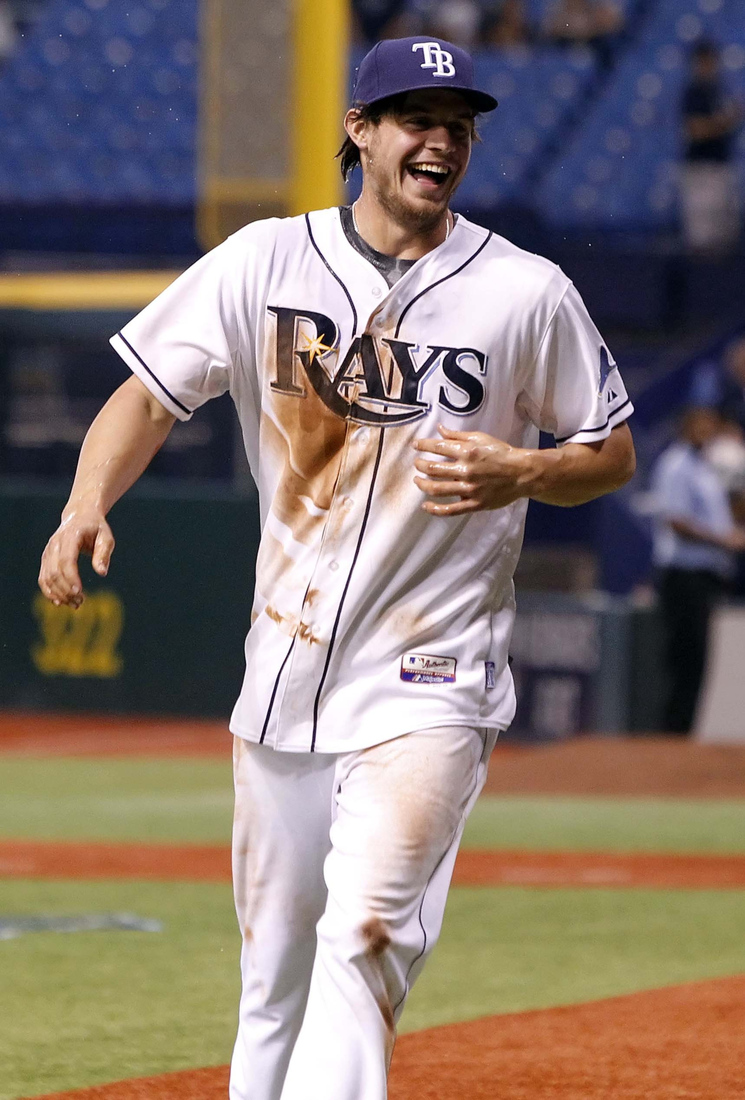 This big goofy grin is the result of a Gatorade bath after the walk-off win noted above -- Photo Credit: Kim Klement-USA TODAY Sports

Let's come back to reality. My opinion as a fanboy is probably mediocre, but someone I do trust is our skipper.

Joe Maddon recently chimed in on Myers' ability and power, specifically in regards to Wil's potential to win this year's award, and he was just as confident as Wil is in the dugout.

"[Myers] was very impressive, to come in as he did, and he made a huge difference for us when he showed up. He did struggle a little bit in the playoffs; however, don't forget what he did to get us to this particular moment.

"He hits the ball as far as anybody in baseball right now... he definitely has a big league makeup. I talked a lot about him not being overwhelmed [during the season]. He should be Rookie of the Year. There's no question in my mind."

Okay, you got me.

Our perspective on Myers can be easily tainted if we dwell on the playoffs. Wil Myers got 17 plate appearances in the ALDS against Boston, during which he got on base twice. One hit, one walk. Those seventeen plate appearances do not preclude half a season's worth of work, but they are problematic. So go ahead and remove "clutch" if you want to, but the body of work speaks for itself.

Myers played in only 88 regular season games (if you count Game 163) due to the organization's hard line of avoiding Super Two status that would force contract arbitration a year sooner than is standard with rookies in the Collective Bargaining Agreement (a "mistake" the Rays made with David Price).

During that time frame, Myers racked up 2.4 wins above replacement. Arbitrarily extrapolate that over a full season, and the Rays could have a 4.5 win player in right field next season.

That's nice. Where does that come from?

Myers had all the tools of a consensus Top-5 prospect when he was acquired, but expectations were not high for Myers's work in the field. He's a converted catcher that lost a year of practice in the minors shortly after transitioning to right field due to a knee injury -- and the time he did spend in the Royals organization was mostly in center field.

If I were to guess how Myers would've performed in right, I might have expected a great arm thanks to his work as a catcher, but some awkwardness in terms of tracking the ball. The scouting reports echoed the sentiment, but what we got was the opposite effect.

After a half-season's worth of watching Myers, it was a rarity when he did make a mistake, and when it happened I thought to myself, "Oh yeah, that's supposed to be normal, but I guess he makes that play all the time." Furthermore, we rarely ever saw Wil throw farther than the cut-off man, standing at the edge of the infield. The guy I expected in the field became the opposite of Yasiel Puig, but that's my perception.

The Rays got a taste of his inexperience in the ALDS when Myers caught Desmond Jennings in his peripheral vision and bailed on a David Ortiz liner. The mistake was opened the flood gates for Boston's scoring effort in game one and was instantly infamous, but in truth, that's not the Myers we saw all year.

He certainly had his moments.

As Myers gets more time in the field, he will improve -- but the least we can say is that his defense was better than expected.

One of my favorite aspects to Myers's game has been opposite field hitting.

This is Wil Myers's spray chart, overlaid with Tropicana Field:

While Myers made plenty of outs to the left side of the infield, Myers placed his hits evenly across the field, a signal in the noise for a great approach at the plate.

Out of Myers's 248 plate appearances that saw the ball put into play, 137 were to center or right field, including 55 of his 98 singles, 13 of his 23 doubles, and 6 of his 13 home runs -- even his first homerun in the majors was opposite field, a grand slam off C.C. Sabathia in the house that Steinbrenner built.

There was some expectation that Myers's quick swing would result in misses on breaking pitches away, based on scouting reports, but Myers even proved that wrong. The previous two seasons, Wil had been moving to a more aggressive approach at the plate.

Minor League Ball's John Sickels didn't see this as a problem, per se, but suggested Myers would need to be cautious. "His approach isn't always the best," Sickels wrote, "and he is vulnerable to breaking stuff and pitches outside the zone when in an over-aggressive mindset. I think this is a matter of emphasis rather than talent: he has a good natural eye, he just needs to decide how to use it, finding the right balance and developing intelligent aggression."

The Rays began their tinkering with his swing, and Myers struggled mightily in April, but turned it around in May -- leading to his call up on June 18.

As it turned out, the rookie was generally able to hold off on breaking pitches outside, with only a few problems on the bottom edge. In fact, the majority of his swings and misses came on off-speed pitches inside the zone, a trend Myers was able to bring under control as the season progressed. 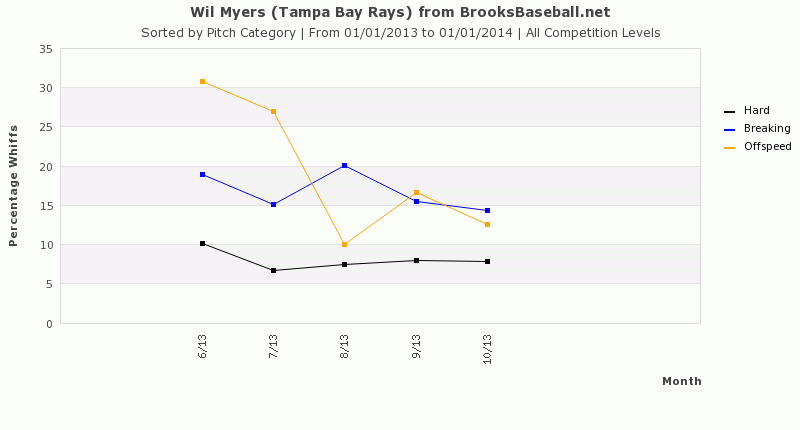 If you wanted to beat Myers at the plate, a fastball high and above the zone might do the trick, but if you missed, he made you pay -- and that was just fun to watch.

Put all these elements together, and you have a stand out performance.

Despite the limited playing time, this Rays rookie is also fortunate this season's freshman class is exceptionally weak. Here's a cursory view of the other rookies in the running for the award:

- Chris Archer [TBR], delivered key performances for the Rays throughout the season, including two complete game shutouts featuring no walks an at least six strikeouts in July, but was also rather streaky -- 3.22 ERA, 4.07 FIP, 19.2 K%, 7.2 BB%, 1.2 WAR

Each of these rookies have stand out features -- Iglesias with his deservedly dramatic and impressive throws, Perez's ability to float the back end of a drowning pitching staff in Texas, Archer with his occasional shutouts -- but Myers's season stands out above the rest.

Myers surpassed expectations this season to post a 131 wRC+ and .357 wOBA, placing only behind Evan Longoria in either category, while his .354 on-base percentage was tied with Ben Zobrist for the best on the roster. He was thumping the ball to all fields, and providing decent enough coverage in right field to justify playing on a regular basis. It was a great year.

Better yet, looking over the season that was, it may have been better than I thought.